Comments (1)
Add to wishlistDelete from wishlist
Cite this document
Summary
Much work has been done to highlight student’s misconceptions in science, and to provide strategies for dealing with these. This study investigates whether teachers are putting this into practice in the real world…
Download full paperFile format: .doc, available for editing
HIDE THIS PAPERGRAB THE BEST PAPER93.9% of users find it useful 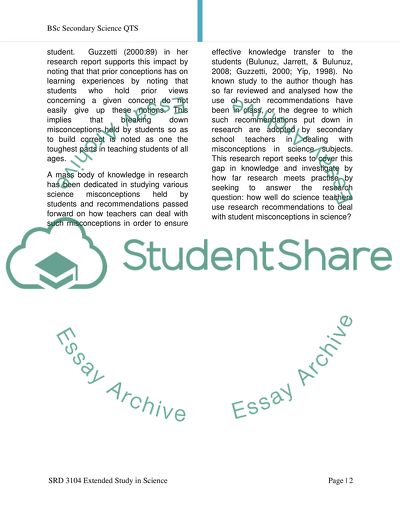 Download file to see previous pages This topic is significant as it connects research to practice. The paper interviews 9 science teachers from three different high schools, and observes two of them in class while introducing a new concept. The research found that there exists a considerable alignment between research and practice with quite a considerable number of teachers employing researched recommendations to deal with student misconceptions. This is despite the fact that in comparison not many teachers have extensive knowledge of research report recommendations.
Introduction
When teachers instruct students on various concepts from a wide array of subjects, they often encounter students who already have their own preconceived ideas about the theories and concepts on how things work. This is more so in science subjects where children get to understand various aspects of science in their own ways before they are taught on such concepts.
For instance some science students before being taught about the galaxy may think that the earth is the biggest planet there is and exists on its own, or they may think that the moon has its own light, or that it is the sun that moves around the earth rather the earth since they can see the sun move and not feel the earth tilt. Indeed research shows that when students come to class to learn they often have their own prior rich knowledge on how science works based on their own experiences, peer interactions, and also based on some science knowledge they have attained or the based on erroneous concepts taught by previous instructors (Yip, 1999:207; Bulunuz, Jarrett, & Bulunuz, 2008:32-33). Such prior knowledge or preconceptions may impact positive or negatively the learning process of a student. Guzzetti (2000:89) in her research report supports this impact by noting that that prior conceptions has on learning experiences by noting that students who hold prior views concerning a given concept do not easily give up these notions. This implies that breaking down misconceptions held by students so as to build correct is noted as one the toughest parts in teaching students of all ages. A mass body of knowledge in research has been dedicated in studying various science misconceptions held by students and recommendations passed forward on how teachers can deal with such misconceptions in order to ensure effective knowledge transfer to the students (Bulunuz, Jarrett, & Bulunuz, 2008; Guzzetti, 2000; Yip, 1998). No known study to the author though has so far reviewed and analysed how the use of such recommendations have been in class, or the degree to which such recommendations put down in research are adopted by secondary school teachers in dealing with misconceptions in science subjects. This research report seeks to cover this gap in knowledge and investigate by how far research meets practise by seeking to answer the research question: how well do science teachers use research recommendations to deal with student misconceptions in science? Literature Review Student Science Misconceptions Guest (2003:2) defines student misconceptions as student’s viewpoints that are different from the conventionally known science knowledge where such beliefs are as a result of previous experience. Others such as Bulnuz, Jarret and Bulunuz (2008:32) and Thompson and Logue (2006:553) view student misconceptions as ideas that provide a crooked and incorrect way to understand about scientific concepts and which may be as a result of personal experiences, everyday language, media or even incorrect instructional material or incorrect ideas from some instructors. These misconceptions are often deep-rooted and tend to be difficult to change (Thompson and Logue, 2006; Guest, 2003: Chi, 2005). ...Download file to see next pagesRead More
Share:
Tags
Cite this document
(“Student Misconceptions in Secondary Science Dissertation”, n.d.)
Retrieved from https://studentshare.org/education/1397859-student-misconceptions-in-secondary-science

il
ilowe added comment 1 year ago
Student rated this paper as
I didn’t know how to start my document. "Student Misconceptions in Secondary Science" helped me out a lot! Especially the list of first sentence was valuable.

CHECK THESE SAMPLES OF Student Misconceptions in Secondary Science

Medical knowledge consists of three issues. Knowledge gained at the medical college, knowledge gained in the practical field in real-life situations in dealing with the patients and above all the self-confidence of the doctor to put into practice his latent skill. A confident doctor does not hesitate to tell the truth. Atul Gawande (2003) writes “There are surgeons who will see faults everywhere except in themselves. They have no questions and no fears about their abilities. As a result, they learn nothing from their mistakes and know nothing of their limitations.” (p.61)Such a doctor lacks loyalty to the professional ethical principles. A lie told has to be remembered all the times, but truth has no such problems. Gaw...
7 Pages(1750 words)Book Report/Review
sponsored ads
Save Your Time for More Important Things
Let us write or edit the dissertation on your topic "Student Misconceptions in Secondary Science" with a personal 20% discount.
GRAB THE BEST PAPER

Let us find you another Dissertation on topic Student Misconceptions in Secondary Science for FREE!