Comments (0)
Add to wishlistDelete from wishlist
Cite this document
Summary
Name: University: Course: Tutor: Date: Exploring the perceptions and experiences of young people leaving in care in UK Introduction The history of the UK care system can be traced back into 1834 from the enactment of the Poor law and the workhouses. During this period, children in the care system rarely returned to their parents and any ties with the birth family were permanently avoided…
Download full paperFile format: .doc, available for editing
HIDE THIS PAPERGRAB THE BEST PAPER93% of users find it useful 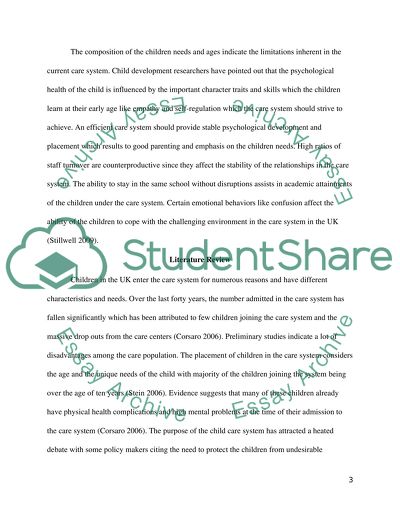 Download file to see previous pages The demise of seven year old Maria Colwell in 1973 in 1973 prompted the establishment of the modern care system. In England and Wales, the care system is guided by the Children’s Act of 1989 while in Northern Ireland it is based on the Children order of 1995. In Scotland the guiding framework is the Children’s Act of 1995. The Children Act of 1989 has witnessed numerous amendments after the death of eight year old child in 2000. The legal framework of the child care system is the Children’s Act of 2004 which provides the expected outcomes of the care system like the need to stay safe, enjoy and achieve, stay healthy, positive economic well-being and the need of positive contribution to the society. The agencies which are involved in the care system have the duty and obligation of sharing information and processes to improve the safety and the well-being of the children under the child care system (Ward H, Holmes, and Soper 2008). The composition of the children needs and ages indicate the limitations inherent in the current care system. Child development researchers have pointed out that the psychological health of the child is influenced by the important character traits and skills which the children learn at their early age like empathy and self-regulation which the care system should strive to achieve. An efficient care system should provide stable psychological development and placement which results to good parenting and emphasis on the children needs. High ratios of staff turnover are counterproductive since they affect the stability of the relationships in the care system. The ability to stay in the same school without disruptions assists in academic attainments of the children under the care system. Certain emotional behaviors like confusion affect the ability of the children to cope with the challenging environment in the care system in the UK (Stillwell 2009). Literature Review Children in the UK enter the care system for numerous reasons and have different characteristics and needs. Over the last forty years, the number admitted in the care system has fallen significantly which has been attributed to few children joining the care system and the massive drop outs from the care centers (Corsaro 2006). Preliminary studies indicate a lot of disadvantages among the care population. The placement of children in the care system considers the age and the unique needs of the child with majority of the children joining the system being over the age of ten years (Stein 2006). Evidence suggests that many of these children already have physical health complications and high mental problems at the time of their admission to the care system (Corsaro 2006). The purpose of the child care system has attracted a heated debate with some policy makers citing the need to protect the children from undesirable influence while other pointing out the need of the need of the ideal family reunification (Chase, Simon and Jackson 2006). The use of the care system has been centered on the need to support families and allow children to return to their birth parents and also the need to safeguard the children beyond their birth parents (Woodhead and Montgomery 2003). The children’s Act 1989 lays down some principles, powers and duties which the agencies involved in child care system must follow like the duty to ...Download file to see next pagesRead More
Share:
Tags
Cite this document
(“Exploring the perceptions and experiences of young people leaving in Essay”, n.d.)
Retrieved from https://studentshare.org/education/1393684-exploring-the-perceptions-and-experiences-of-young
(Exploring the Perceptions and Experiences of Young People Leaving in Essay)
https://studentshare.org/education/1393684-exploring-the-perceptions-and-experiences-of-young.
“Exploring the Perceptions and Experiences of Young People Leaving in Essay”, n.d. https://studentshare.org/education/1393684-exploring-the-perceptions-and-experiences-of-young.
Comments (0)
Click to create a comment or rate a document

This is also the position Stone (2007) takes in the quote under discussion.
Furthermore, Stone goes on to declare that Australia has been very slow to implement this practice as compared with other countries and government agencies. One of the primary reasons is that the public policy system in Australia is quite complex and the decision-makers have not come into agreement on where to place it in the policy matrix. This leaves Interprofessional Practice and Education in the dark (or the cold) as far as strategic planning for implementation as well as placing itself within the funding cycles of the government disbursements. (Stone, 2007)
Policies are created in order to put in place how politicians and government official...
6 Pages(1500 words)Assignment
sponsored ads
Save Your Time for More Important Things
Let us write or edit the essay on your topic "Exploring the perceptions and experiences of young people leaving in care in UK" with a personal 20% discount.
GRAB THE BEST PAPER

Let us find you another Essay on topic Exploring the perceptions and experiences of young people leaving in care in UK for FREE!