Garment Industry in the US Since the 18th Century - Coursework Example

Comments (0)
Add to wishlistDelete from wishlist
Cite this document
Summary
The paper "Garment Industry in the US Since the 18th Century" highlights that the future trend gauged for the industry, which has already found a substantial place within the industry even today, is the outsourcing of areas of production to lesser developed countries…
Download full paperFile format: .doc, available for editing
HIDE THIS PAPERGRAB THE BEST PAPER95.4% of users find it useful 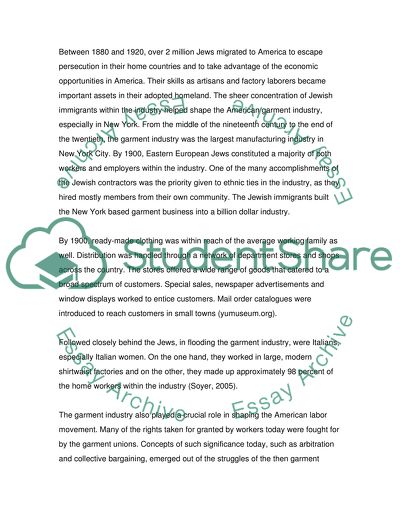 Download file to see previous pages By the 1820s, some enterprising tailors used their slack time to make low-quality garments to be worn by slaves and sailors. But as the century approached its midpoint, more and more respectable Americans started to buy their clothes off the rack. This was especially true of men whose clothes were loosely fitted and not subject to the volatility of fashion as that of women (Soyer, 2005). During the 1830s, the textile industry became more established in America and machine-made clothes were made available to average households.
The ready-made garment industry marked its beginning in American history in the early eighteenth century. The first clothing factory was established in 1831 in New York City. Ready-made clothing, however, remained a small part of the American garment production which was still dominated by home-made clothing. New York rapidly became the center for ready-made garment trade because of its regular shipping connections with southern states.
The Civil War brought in demand for soldier's uniforms and this increased production and led to the introduction of standardized sizes. This period also marked a substantial technological change in the mode of manufacture of garments. Sewing machines were introduced into the manufacturing sector and the shift moved from manual to machine labor. This important technical innovation also paved the way for the mass production of clothing in the industry.
Between 1880 and 1920, over 2 million Jews migrated to America to escape persecution in their home countries and to take advantage of the economic opportunities in America. Their skills as artisans and factory laborers became important assets in their adopted homeland. The sheer concentration of Jewish immigrants within the industry helped shape the American garment industry, especially in New York. From the middle of the nineteenth century to the end of the twentieth, the garment industry was the largest manufacturing industry in New York City. By 1900, Eastern European Jews constituted a majority of both workers and employers within the industry. One of the many accomplishments of the Jewish contractors was the priority given to ethnic ties in the industry, as they hired mostly members from their own community. The Jewish immigrants built the New York-based garment business into a billion-dollar industry.
By 1900, ready-made clothing was within reach of the average working family as well. Distribution was handled through a network of department stores and shops across the country. The stores offered a wide range of goods that catered to a broad spectrum of customers. Special sales, newspaper advertisements and window displays worked to entice customers. Mail-order catalogues were introduced to reach customers in small towns (yumuseum.org).
Followed closely behind the Jews, in flooding the garment industry, were Italians, especially Italian women. On the one hand, they worked in large, modern shirtwaist factories and on the other, they made up approximately 98 percent of the homeworkers within the industry (Soyer, 2005).
The garment industry also played a crucial role in shaping the American labor movement. Many of the rights taken for granted by workers today were fought for by the garment unions.  ...Download file to see next pagesRead More
Share:
Tags
Cite this document
(The wholesale clothing Industry in the US Coursework, n.d.)
The wholesale clothing Industry in the US Coursework. https://studentshare.org/design-technology/1505804-the-wholesale-clothing-industry-in-the-us
(The Wholesale Clothing Industry in the US Coursework)
The Wholesale Clothing Industry in the US Coursework. https://studentshare.org/design-technology/1505804-the-wholesale-clothing-industry-in-the-us.
“The Wholesale Clothing Industry in the US Coursework”. https://studentshare.org/design-technology/1505804-the-wholesale-clothing-industry-in-the-us.
Comments (0)
Click to create a comment or rate a document

Globalization of the clothing industry

13 Pages(3250 words)Assignment
sponsored ads
Save Your Time for More Important Things
Let us write or edit the coursework on your topic "Garment Industry in the US Since the 18th Century" with a personal 20% discount.
GRAB THE BEST PAPER

Let us find you another Coursework on topic Garment Industry in the US Since the 18th Century for FREE!