The History of the Euro Disneyland Creation - Case Study Example

Comments (0)
Add to wishlist Delete from wishlist
Cite this document
Summary
The paper "The History of the Euro Disneyland Creation" states that it is important for the organisation to train and reorientate its human resources management to be accommodative to the cultural values of the host country since these values are responsible for determining the success or failure…
Download full paper File format: .doc, available for editing
HIDE THIS PAPERGRAB THE BEST PAPER91.9% of users find it useful 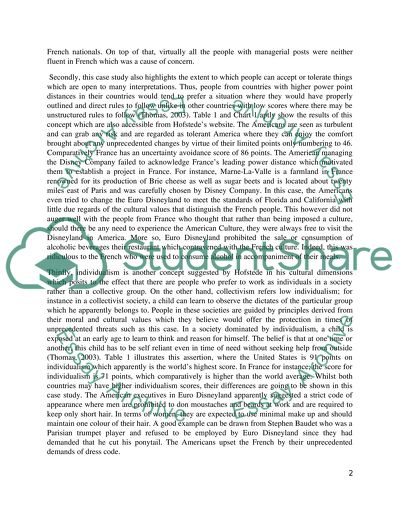 Extract of sample "The History of the Euro Disneyland Creation"

Download file to see previous pages Consideration of cultural values of other nations forms a very strong background upon which the operations of any international business can be based which the Americans did not consider in the first instance. Basically, consumer behaviour in most cases is influenced by various factors such as perception, needs, motives and attitudes and these in most cases are either directly or indirectly influenced by the individual’s cultural background (Kotler, Brown, Adam, Burton and Armstrong 2007). Against this backdrop, the four main differences between the cultures in the United States and France will be explored according to the various cultural dimensions propagated by Hofstede in view of Trompenaars’ study which will attempt to highlight the major differences between them for the sake of easier understanding. This analysis will as well attempt to bring to light especially three mistakes that are believed to have been made by Disney Company during its stint while at the helm of Euro Disneyland. The study will finally attempt to analyse the lessons that could have been learnt by Disney Company with regards to the aspect of the need to consider diversity in any such kind of a deal.
Culture influences the attitude of the consumers which in turn influence their attitude towards something as aptly highlighted by Hofstede’s cultural dimensions which explicitly illustrate mainly four different dimensions between the cultures of the United States and France (Kotler, Brown, Adam, Burton and Armstrong 2007). According to McShane and Travaglione, (2007), the degree to which people accept and believe that there is inequality of the distribution of power in their respective societies is referred to as power distance. Comparatively, the United States’ power distance is 40 points as shown in Table 1, which by any standard is lower at the world level (Thomas, 2003).  ...Download file to see next pages Read More
Share:
Tags
Cite this document
(CROSS CULTURAL NEGOTIATION MGT Case Study Example | Topics and Well Written Essays - 1750 words, n.d.)
CROSS CULTURAL NEGOTIATION MGT Case Study Example | Topics and Well Written Essays - 1750 words. https://studentshare.org/culture/1558261-cross-cultural-negotiation-mgt

CHECK THESE SAMPLES OF The History of the Euro Disneyland Creation

7 Pages (1750 words) Literature review
sponsored ads
Save Your Time for More Important Things
Let us write or edit the case study on your topic "The History of the Euro Disneyland Creation" with a personal 20% discount.
GRAB THE BEST PAPER

Let us find you another Case Study on topic The History of the Euro Disneyland Creation for FREE!