Comments (0)
Add to wishlist Delete from wishlist
Cite this document
Summary
The present essay concerns variations of languages used in daily life and cross-cultural problems, based on the author's experience. Notably, the author uses different varieties of English according to the settings, topics, and participants…
Download full paper File format: .doc, available for editing
HIDE THIS PAPERGRAB THE BEST PAPER92.3% of users find it useful 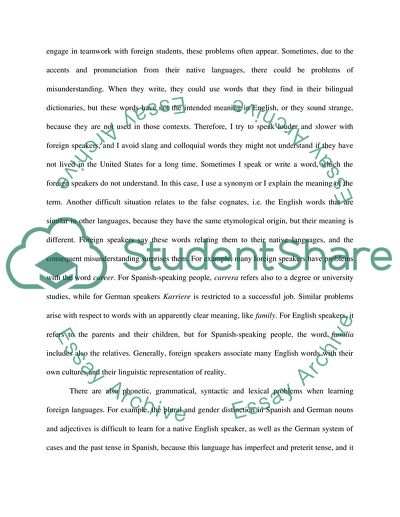 Extract of sample "Varieties of languages and cross-cultural communication"

Download file to see previous pages My spoken English differs from my written English, and they can acquire various forms. The register I use to speak in the classroom, during a presentation or with the teachers is not the same which I use to speak with my family and friends during a spontaneous conversation. Besides, my written English in a chat or informal e-mail has many oral characteristics (use of slang, contractions, colloquial words, repetitions), but my written formal English has the vocabulary that I usually do not speak, and I take care of the style and grammar.
I live in a country with many immigrants, whose native language is not English. Many of them have learned English after they came, or in their countries of origin, where the taught language differs from the daily spoken language. When these people go to work or study, they can encounter cross-communication problems with native speakers. For example, when we engage in teamwork with foreign students, these problems often appear. Sometimes, due to the accents and pronunciation from their native languages, there could be problems of misunderstanding. When they write, they could use words that they find in their bilingual dictionaries, but these words have not the intended meaning in English, or they sound strange because they are not used in those contexts. Therefore, I try to speak louder and slower with foreign speakers, and I avoid slang and colloquial words they might not understand if they have not lived in the United States for a long time. ...Download file to see next pages Read More
Share:
Tags
Cite this document
(“Varieties of languages and cross-cultural communication Essay”, n.d.)
Varieties of languages and cross-cultural communication Essay. Retrieved from https://studentshare.org/culture/1547619-varieties-of-languages-and-cross-cultural-communication

“Varieties of Languages and Cross-Cultural Communication Essay”, n.d. https://studentshare.org/culture/1547619-varieties-of-languages-and-cross-cultural-communication.
Comments (0)
Click to create a comment or rate a document

CHECK THESE SAMPLES OF Varieties of languages and cross-cultural communication

Internal communication in any organization has been found to play a significant role in regard to role achievement in any business venture. When the internal communication department closely works with the top management, it has been found that job satisfaction levels rise which in effect translates to higher individual and group output from the workers (HRM guide, 2009). It is the role of the internal communication department to ensure that the strategic organizational direction is passed on to all employees and followed as planned so as to guarantee the achievement of intended outcomes.
With the current developments towards globalization, knowledge availability has become more readily available and the economy has approache...
9 Pages (2250 words) Assignment

Cultural and social globalization denotes the extensive movement of goods, technologies, ideas, images and people around the entire world which has been...
6 Pages (1500 words) Coursework
sponsored ads
Save Your Time for More Important Things
Let us write or edit the essay on your topic "Varieties of languages and cross-cultural communication" with a personal 20% discount.
GRAB THE BEST PAPER

Let us find you another Essay on topic Varieties of languages and cross-cultural communication for FREE!