Comments (0)
Add to wishlist Delete from wishlist
Cite this document
Summary
The paper "Cultural Literacy" states that cultural Literacy has helped people to be cautious especially when dealing with other people in different cultural settings. Since they know their language and beliefs, they will adjust to such norms if they are to be accepted by those cultures. …
Download full paper File format: .doc, available for editing
HIDE THIS PAPERGRAB THE BEST PAPER97.5% of users find it useful 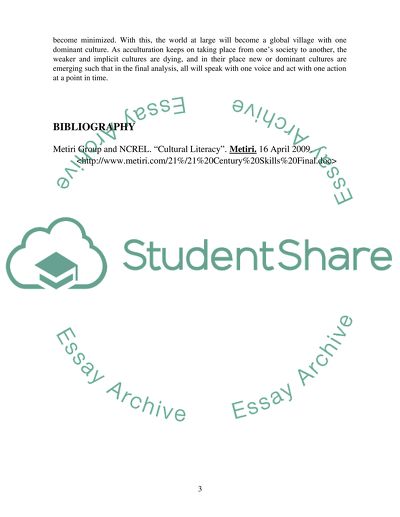 Several authors define Cultural Literacy differently. However, all the definitions converge on the fact that it is the ability to understand and appreciate the similarities and differences in the customs, values and beliefs of one's own culture and that of others as put by Stigler (2000) in Metiri Group in Cooperation with NCREL. In other words, cultural literacy is seen as the ability to converse fluently in the figurative language (such as idioms, allusions, proverbs and informal content) which creates and constitutes a culture.

From the two definitions above, it can be clearly seen that cultural literacy is very important. Firstly, it multiplies access to practices, ideas and people that can make positive contributions to our societies. Secondly, it helps us understand ourselves more deeply. The knowledge of the language makes one understand and use values and beliefs of a particular culture in the manner that the norms of that society demand as seen in the use of idioms, proverb and allusions. On the other hand, knowledge of the languages of other cultures will also help individuals understand the beliefs and values of those cultures. For instance, the knowledge of English has made people whose primary language is not English to learn more about the English Culture starting with their origin, values, beliefs and use of technology. In this way, people are able to operate machines, use computers and other technologies by using the English language or so. The knowledge of the language makes these people understand themselves better in their society and rate themselves about who they are in the face of other cultures. They become aware of their own implicit beliefs and therefore adopt those that are legitimate.

Again, cultural literacy has also unveiled shortfalls in certain cultural beliefs and values. Because of the knowledge of western cultures, many people, who initially got stuck in their very primitive cultural beliefs and values are now taking new lifestyles. For example, the Masai of East Africa are currently abandoning Nomadic Pastoralism and adopting legitimate agriculture; several Africans are switching on to intensive farming from their crude shifting cultivation; Polygamy is dying slowly; family sizes are changing; gender disparities are being adjusted; eating habits are also taking new shapes; new transport systems and other technologies are replacing the primitive ones. In short, all the primitive ideologies are being replaced by globally accepted ones.

CHECK THESE SAMPLES OF Cultural Literacy

As a function of this, this book proved to be a pivotal and seminal work within the genre of cross-cultural understanding as, even though it was a novel, it helped to open the eyes of many in and around the country as to the unique set of situations that individuals experienced as a function of not only being bi-racial and living in a juxtaposition of two alternate societies but attempting to draw a sense of personal identity between the two and forging a third as a result. Furthermore, although not the express intent of the book, the issues of assimilation and the firm choice that the second generation immigrant must make between the culture of their parents and the unique aspects of the culture that they have been raised into.
sponsored ads
Save Your Time for More Important Things
Let us write or edit the assignment on your topic "Cultural Literacy" with a personal 20% discount.
GRAB THE BEST PAPER

Let us find you another Assignment on topic Cultural Literacy for FREE!