Comments (0)
Add to wishlist Delete from wishlist
Cite this document
Summary
The paper "The Indian Famous Culture" discusses that India is known for the Multinational Corporations and Transnational Organisations, operating from there. Information Technology and Outsourcing is a big industry in India and this makes is a great country to work with…
Download full paper File format: .doc, available for editing
HIDE THIS PAPERGRAB THE BEST PAPER93.4% of users find it useful 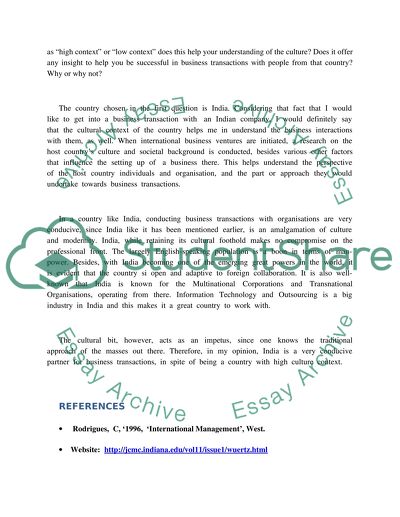 ﻿CULTURE
1. Choose a country whose culture you are familiar with. Would you consider its culture to be “high context” or “low context”? Provide a brief example.
The country, whose culture I am familiar with, is India. India is a country that has emerged not only as a strong political power, but has also succeeded immensely at influencing the whole world and winding the world in its culture. Be it yoga or the sari, these tiny representations of Indian culture sure have led to more awareness and inquisitiveness about Indian culture and spirituality. In my opinion, the Indian culture is ‘high context’. High context culture refers to the culture of a country that is mostly self-explanatory and it is assumed that the others would possess some knowledge about the same.
The Indian culture is famous worldwide. When one finds a woman wearing a bindi on the forehead, we instantly know that she is a Hindu from India. Similarly, when we spot a man in a dhoti or when we picture kings mounted on elephants and living in exotic palaces, we certainly conjure the image of India. However, this is not limited to these expressions of culture. Inherently, the Indians are traditional and love keeping up their ethics and social traditions in spite of the modernisation. The Indian culture is not just pertinent to one religion and represents all the religions followed in India. It is this multi-culturalism that enhances the beauty fo the Indian culture. Now, when we meet an Indian, we certainly assume numerous things about his culture, which is because we do conjure a picture about what India is. This is typical to a high culture context.
2. Consider the culture of the country you chose for the first question. If you classify the culture as “high context” or “low context” does this help your understanding of the culture? Does it offer any insight to help you be successful in business transactions with people from that country? Why or why not?
The country chosen in the first question is India. Considering that fact that I would like to get into a business transaction with an Indian company, I would definitely say that the cultural context of the country helps me in understand the business interactions with them, as well. When international business ventures are initiated, a research on the host country’s culture and societal background is conducted, besides various other factors that influence the setting up of a business there. This helps understand the perspective of the host country individuals and organisation, and the part or approach they would undertake towards business transactions.
In a country like India, conducting business transactions with organisations are very conducive, since India like it has been mentioned earlier, is an amalgamation of culture and modernity. India, while retaining its cultural foothold makes no compromise on the professional front. The largely English-speaking population is a boon in terms of man-power. Besides, with India becoming one of the emerging great powers in the world, it is evident that the country si open and adaptive to foreign collaboration. It is also well-known that India is known for the Multinational Corporations and Transnational Organisations, operating from there. Information Technology and Outsourcing is a big industry in India and this makes it a great country to work with.
The cultural bit, however, acts as an impetus, since one knows the traditional approach of the masses out there. Therefore, in my opinion, India is a very conducive partner for business transactions, in spite of being a country with high culture context.
REFERENCES
Rodrigues, C, ‘1996, ‘International Management’, West.
Website: http://jcmc.indiana.edu/vol11/issue1/wuertz.html Read More
Share:
Tags
Cite this document
(“The Indian Famous Culture Essay Example | Topics and Well Written Essays - 500 words”, n.d.)
The Indian Famous Culture Essay Example | Topics and Well Written Essays - 500 words. Retrieved from https://studentshare.org/culture/1526406-questions-college-essay

CHECK THESE SAMPLES OF The Indian Famous Culture

America, as the richest and most powerful state on the planet, is at the forefront of industrial and technological progress. As such, it is no surprise that other industrially developed countries in the West, but also including English-speaking modern states like Australia and New Zealand, have close commercial and cultural ties with the USA. Western Europe, specifically after the S...

He has to be accountable to the publics of the organization, which could include the customers and the stakeholders as well since the latter are the people who have invested within the company’s shares and they want a quick buck out of the whole investment drive. We need to define further how the job of a manager is made even more troublesome and how he copes up with the very same. With that, we will also touch subjects that bring attraction to the post of a manager in the first place. These could include his leadership traits, his team-building tactics, getting the work done out of individuals who might have pretty different backgrounds and diverse educational capabilities, smoothening of the whole process of business manag...
12 Pages (3000 words) Case Study

It was during a gathering that he brought forth his idea which soon after motivated Frederic Bartholdi, who was the famed sculptor of the Statue of Liberty and initiated the negotiations in building the iconic statue by conveying the proposal letters to America to build the dedicatory statue and secretly build his dreams as a sculptor.
Edouard-René Lefebvre de Laboulaye was born in Paris, France on January 18, 1811. He was a renowned statesman, a professor, a poet and one of the geniuses behind the conception and construction of the Statue of Liberty. He served in the Collège de France as professor of comparative law and later as an administrator. de Laboulaye also served as chairman of the French Anti-Slavery S...
13 Pages (3250 words) Assignment

Let us find you another Essay on topic The Indian Famous Culture for FREE!