Comments (0)
Add to wishlistDelete from wishlist
Cite this document
Summary
The paper "Famous Russian Imperial Culture" describes that the new/alternative paradigm the culture of the past can be for us is to help chart a new course for a new economy and politics for Russia. Imperialism has been done away with, but the pride of Russians in their country is still great…
Download full paperFile format: .doc, available for editing
HIDE THIS PAPERGRAB THE BEST PAPER93.6% of users find it useful 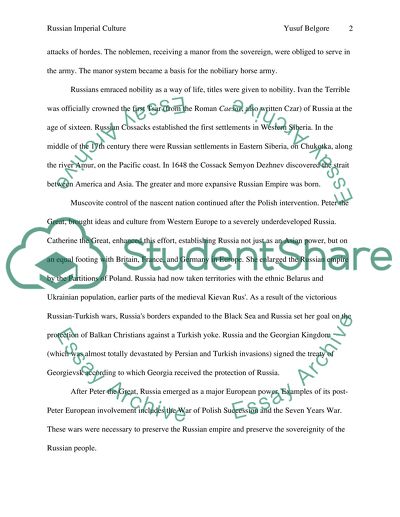 Download file to see previous pages Imperialism is an exploitative system of administration in which certain group comes to territory and exploits the people of their wealth. Fundamentally, however, monopoly and finance capitalism are logical developments from free, competitive capitalism; political imperialism is a logical development of monopoly capitalism; war is a logical development of imperialism. Wars were therefore very important aspects of imperial Russian culture.
The Russian state persistently battled against Nogai-Horde and Crimean khanat which were successors of the Golden Horde. Russians captured by nomads were sold on Crimean slave markets. In 1571 the Crimean khan Devlet-Girei, with a horde of 120 thousand horsemen, devastated Moscow. Annually thousands of Russians became victims of attacks by nomads. Tens of thousands of soldiers protected the southern borderland - a heavy burden for the state which slowed its social and economic development.
At the beginning of the 16th century, the Russian state set the national goal to return all Russian territories lost as a result of the Mongolian invasion and to protect the borderland against attacks of hordes. The noblemen, receiving a manor from the sovereign, were obliged to serve in the army. The manor system became a basis for the nobiliary horse army.
Russians embraced nobility as a way of life, titles were given to nobility. Ivan the Terrible has officially crowned the first Tsar (from the Roman Caesar, also written Czar) of Russia at the age of sixteen. Russian Cossacks established the first settlements in Western Siberia. In the middle of the 17th century, there were Russian settlements in Eastern Siberia, on Chukotka, along the river Amur, on the Pacific coast.
In 1648 the Cossack Semyon Dezhnev discovered the strait between America and Asia. The greater and more expansive Russian Empire was born.
Muscovite control of the nascent nation continued after the Polish intervention. Peter the Great, brought ideas and culture from Western Europe to a severely underdeveloped Russia. Catherine the Great, enhanced this effort, establishing Russia not just as an Asian power, but on an equal footing with Britain, France, and Germany in Europe. She enlarged the Russian empire by the Partitions of Poland. Russia had now taken territories with ethnic Belarus and Ukrainian population, earlier parts of the medieval Kievan Rus'. As a result of the victorious Russian-Turkish wars, Russia's borders expanded to the Black Sea and Russia set her goal on the protection of Balkan Christians against a Turkish yoke. Russia and the Georgian Kingdom (which was almost totally devastated by Persian and Turkish invasions) signed the treaty of Georgievsk according to which Georgia received the protection of Russia.
After Peter the Great, Russia emerged as a major European power. Examples of its post-Peter European involvement includes the War of Polish Succession and the Seven Years War.  ...Download file to see next pagesRead More
Share:
Tags
Cite this document
(Russian Imperial Culture Essay Example | Topics and Well Written Essays - 2000 words, n.d.)
Russian Imperial Culture Essay Example | Topics and Well Written Essays - 2000 words. https://studentshare.org/culture/1505446-russian-imperial-culture
(Russian Imperial Culture Essay Example | Topics and Well Written Essays - 2000 Words)
Russian Imperial Culture Essay Example | Topics and Well Written Essays - 2000 Words. https://studentshare.org/culture/1505446-russian-imperial-culture.
“Russian Imperial Culture Essay Example | Topics and Well Written Essays - 2000 Words”. https://studentshare.org/culture/1505446-russian-imperial-culture.
Comments (0)
Click to create a comment or rate a document

Russian Culture and Civilization under the Tsars

Russian authors and their role in Russian culture and history

7 Pages(1750 words)Term Paper
sponsored ads
Save Your Time for More Important Things
Let us write or edit the essay on your topic "Famous Russian Imperial Culture" with a personal 20% discount.
GRAB THE BEST PAPER

Let us find you another Essay on topic Famous Russian Imperial Culture for FREE!