Comments (0)
Add to wishlistDelete from wishlist
Cite this document
Summary
My experience in research and writing of my term papers has both been an enjoyable and a challenging experience. English language being my fourth language, I have had numerous, challenging cases whereby I ended up in deadlock situations wondering what to write while doing some of my projects and assignments. …
Download full paperFile format: .doc, available for editing
HIDE THIS PAPERGRAB THE BEST PAPER95.8% of users find it useful 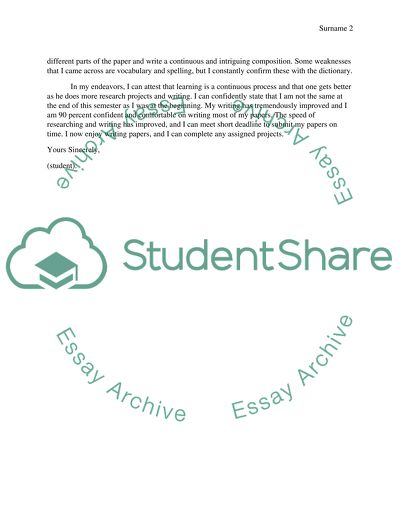 Extract of sample "Over letter"

Dear Sir/Madam, My experience in research and writing of my term papers has both been an enjoyable and a challenging experience. English language being my fourth language, I have had numerous, challenging cases whereby I ended up in deadlock situations wondering what to write while doing some of my projects and assignments. This was mostly at the beginning of the semester. However, I have acquired assistance from my instructors and colleagues because of the English-speaking environment and culture.
However, my experience of writing research papers overtime has improved due to the numerous resources and exposures. Some of the most influential resources have been the internet, school library and of course, my instructors and my colleagues. My process of reading, research and writing to this unit has not been easy during this semester. I encountered a number of challenges as I underwent doing some of my research projects. Some of the challenges that I came across were lack of reliable resources to get the content, short deadlines to beat, and distractions from my busy schedules among others. In other circumstances, the content that I produced from my research often turned out to be unsatisfactory to my instructors and lecturers.
This led to numerous revision requests that were inconveniencing because they took most of my time reviewing my research strategies. This was terribly frustrating to me because I had to put some of my work pending to attend to the revisions. However, as time went by, my writing and research skills improved as I researched on most of my projects. During the difficult times and experiences, I sought assistance from my colleagues who were of much help.
Some of the positive experiences that I encountered were the ability to form group discussions with my class colleagues. This mode of learning was extremely helpful because I found out that I did learn much from my colleagues in the research project and composition writing. This revealed that teamwork is truly essential in accomplishing the assigned work. The revision part of my research writing was, however, frustrating. At times, I had to redo the whole paper since either it was out of context, or it had minor mistakes such as grammatical. Though frustrating, the revision part helped me a lot because it gave me guiding points on how to write efficiently and strategies on how to conduct my research.
Some of the changes that I would appreciate my professor to notice is the level of quality composition that I am able to submit. Initially, my writing was substandard because of shortcomings in research but currently, I can state that my writing has improved. Some of the strengths of my papers are the ability to provide strong thesis statements, incorporate the different parts of the paper and write a continuous and intriguing composition. Some weaknesses that I came across are vocabulary and spelling, but I constantly confirm these with the dictionary.
In my endeavors, I can attest that learning is a continuous process and that one gets better as he does more research projects and writing. I can confidently state that I am not the same at the end of this semester as I was at the beginning. My writing has tremendously improved and I am 90 percent confident and comfortable on writing most of my papers. The speed of researching and writing has improved, and I can meet short deadline to submit my papers on time. I now enjoy writing papers, and I can complete any assigned projects.
Yours Sincerely,
(student).
Work cited
Customer’s file. Read More
Share:
Tags
Cite this document
(“Over letter Essay Example | Topics and Well Written Essays - 250 words”, n.d.)
Over letter Essay Example | Topics and Well Written Essays - 250 words. Retrieved from https://studentshare.org/creative-writing/1586511-over-letter

CHECK THESE SAMPLES OF Over letter

Commonsense Reasoning in and over Natural Language

The theories and theorems that are involved in quantifying language fail to provide us a limitless and potentially useable formula for quantification regardless of their complexity and their rationale supporting it.

IAS 27 defines ‘control’ as the ‘power to govern the financial and operating policies of an enterprise so as to obtain benefits from its activities.’(IAS Plus)i. Again ‘control’ under SIC 12 is treated to be exerted when the entity has decision making powers to obtain the majority of benefits of activities or business of Special Purpose Entity (SPE). Now consider the definition of control provided by Exposure Draft 10. Paragraph 11 of ED defines control as a situation when ‘a reporting entity controls another entity when the reporting entity has the power to direct the activities of that other entity to generate returns for reporting entity.’

A careful reading of the above...

Within the text of the Apology as Socrates begins his defence of himself against the old enemies that have spoken falsely “telling of one Socrates, a wise man, who speculated about the heaven above, and searched into the earth beneath, and made the worse appear the better cause” (Apology: 944). He realizes most of his jurors have heard bad things about him from the time that they were young and are unlikely now to change their minds regarding his guilt. It has been argued that with this knowledge, Socrates should have done more to defend himself based upon more emotional reasons, such as bringing his family to court to plead for his life. Within the trial itself, it has been argued that Socrates could have made a bette...
9 Pages(2250 words)Essay

The way their fans are created and how they practice and display their fandom depends on the time, memories, brand loyalty, technology, and facilities that these consoles have offered them. The fans of PlayStation and Xbox may have different opinions in regard to their favorite consoles, but one thing is common between them; their excessive love and emotional bonding with their brands.
The debate over the better gaming console has lasted for years amongst the fans. Fans are created not by a single factor but by the combination of multiple factors which include features, costs, brand loyalty, attachment, customer satisfaction levels, and others. Gaming has been a part of life which often attracts youngsters to spend time with...
6 Pages(1500 words)Case Study

Genre Conventions as They Change over Time

Let us find you another Essay on topic Over letter for FREE!