Comments (0)
Add to wishlistDelete from wishlist
Cite this document
Summary
The writer of this essay "A Narrative:  Old World, New Words" discusses the experience moving to Hawaii from China, he was so lonely, homesick and frightened by the sights and sounds of so many strangers. The smells were something else too, not unpleasant but unusual to him…
Download full paperFile format: .doc, available for editing
HIDE THIS PAPERGRAB THE BEST PAPER91.5% of users find it useful 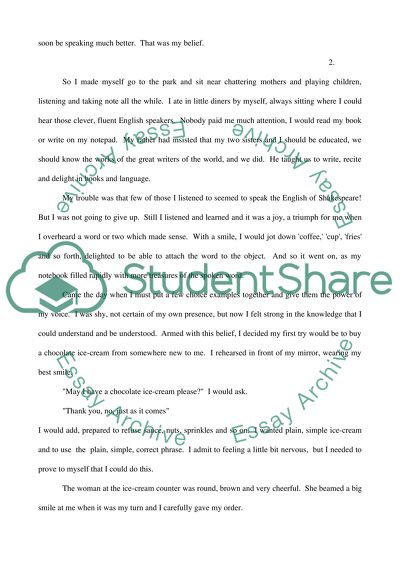 CHECK THESE SAMPLES OF A Narrative: Old World, New Words

...﻿New World Order, Old World Mess? This essay discusses the view on the New World Order, how it would be affected by the impact of global forces such as the technological revolution, industrialization, population growth, changing social values, and religious conflict, and the roles that different nations will play. The first part explains what a new world order is and the key historical events that defined past world orders, the actual events that followed, and the impact 9/11 had on perceptions of what the future brings. The second part recounts the driving forces that defined past world orders and how these drivers would affect the new world order. The third part proposes the roles of today’s powerful nations in shaping the future...
7 Pages(1750 words)Essay

... A Brave New World 26 February Introduction Man has always wondered since time immemorial about his ultimate place in the big universe. He had attempted to find meaning in this scheme of things without much success. A key repeated theme is seeming failure to find that true meaning that will justify his existence. What usually happens is that the more Man goes deeper into the search for ultimate meaning, the more he finds nothing. This is confounding, to say the least, and goes to show how useless the search could be. Many people had been doing this search several times and came up with nothing. Out of this seeming hopelessness and uselessness came the philosophical idea of the absurd – that Mans search for individual meaning is bound...
8 Pages(2000 words)Term Paper
sponsored ads
Save Your Time for More Important Things
Let us write or edit the essay on your topic "A Narrative: Old World, New Words" with a personal 20% discount.
GRAB THE BEST PAPER

Let us find you another Essay on topic A Narrative: Old World, New Words for FREE!