Comments (0)
Add to wishlistDelete from wishlist
Cite this document
Summary
In this paper, I describe one of my personal experiences, in which a harsh incident while driving turned into a somewhat pleasant start of a friendship. Drivers need to delineate their dos and don’ts so that they can escape dangerous situations on road…
Download full paperFile format: .doc, available for editing
HIDE THIS PAPERGRAB THE BEST PAPER95.5% of users find it useful 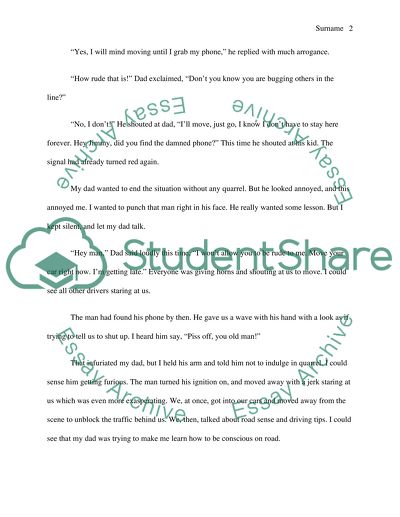 Extract of sample "My Driving Experience"

CHECK THESE SAMPLES OF My Driving Experience

Globalization has mandated the amalgamation of cultures, highlighting the need for sensitivity to the cultural norms of other countries. The Management Style of the leader of an organization is likely to affect the degree to which it achieves productivity when working in an international climate. In today’s global, competitive framework, changes are a constant feature. As more companies are becoming multinational and expanding their operations, they become increasingly subject to unknown world influences that may infl...

The Dangers and Stupidity of Driving While Intoxicated

Drinking a glass of wine or taking a puff on a joint are not inherently evil acts. However, indulging in excess then making the decision to operate a vehicle on public roads is an irresponsible, reprehensible and criminal action, much the same as owning a gun is harmless until it is loaded and pointed at someone. When people are loaded and point a 3000-pound car traveling at high speeds at everyone, this is inexcusable and should be viewed in the same way as if a person began firing at random targets in a crowded area. It’s a comparable scenario but instances of impaired driving are multiplied by thousands of times. There are solutions to the problem but one is surprisingly not incarceration as this discussion will reveal.

Time is one of the most essential elements of human life and its proper management is required for the personal development of human beings. Time management has been defined in different ways and a good understanding of the concept may be arrived at from the following definitions. “Time management is a set of principles, practices, skills, tools, and systems that work together to help you get more value out of your time with the aim of improving the quality of your life.” (Definition of Time Management. 200...

... which makes it even more difficult for me to translate my thoughts into words. Writing has never been one of my strong points. Unlike some people who can put their ideas into words easily, I spend hours looking at the screen of my computer hoping that somehow, I will be able to write just a few pages of essay to pass my class. Writing a technical paper or an essay for that matter is what you might call an “excruciating experience” for me. Since my English is not perfect, I often find myself looking for the right words to describe something. You see, writing is very much different from talking. During a conversation, when my listener does not understand what I am saying, I can always explain my point by using illustrations or hand signs...
8 Pages(2000 words)Essay
sponsored ads
Save Your Time for More Important Things
Let us write or edit the essay on your topic "My Driving Experience" with a personal 20% discount.
GRAB THE BEST PAPER

Let us find you another Essay on topic My Driving Experience for FREE!