Business Ethics in the of Timberland-City Year - Case Study Example

Comments (0)
Add to wishlistDelete from wishlist
Cite this document
Summary
This paper "Business Ethics in the Case of Timberland-City Year" focuses on the fact that ethics play a crucial role in the performance of an organization. The organizational workers are required to take into account the ethical considerations in order to work successfully and progressively. …
Download full paperFile format: .doc, available for editing
HIDE THIS PAPERGRAB THE BEST PAPER98.1% of users find it useful 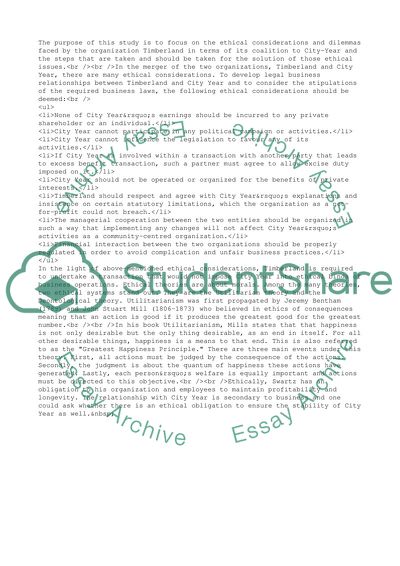 Extract of sample "Business Ethics in the of Timberland-City Year"

Download file to see previous pages The purpose of this study is to focus on the ethical considerations and dilemmas faced by the organization Timberland in terms of its coalition to City-Year and the steps that are taken and should be taken for the solution of those ethical issues.

In the merger of the two organizations, Timberland and City Year, there are many ethical considerations. To develop legal business relationships between Timberland and City Year and to consider the stipulations of the required business laws, the following ethical considerations should be deemed:
In the light of above-mentioned ethical considerations, Timberland is required to undertake a transaction that would not impose City Year into ethical binds of business operations. Ethical theories are about morals. Among the many theories, two ethical systems stand out. They are the Utilitarian theory and the Deontological theory. Utilitarianism was first propagated by Jeremy Bentham (1789) and John Stuart Mill (1806-1873) who believed in ethics of consequences meaning that an action is good if it produces the greatest good for the greatest number.

In his book Utilitarianism, Mills states that that happiness is not only desirable but the only thing desirable, as an end in itself. For all other desirable things, happiness is a means to that end. This is also referred to as the "Greatest Happiness Principle." There are three main events under this theory. First, all actions must be judged by the consequence of the actions. Secondly, the judgment is about the quantum of happiness these actions have generated. Lastly, each person’s welfare is equally important and actions must be directed to this objective.

He had aided the false representation of Enron inflated profits and pressed for dubious accounting practices plus fraud, with the intention of enriching himself and other executives. However, in spite of foreseeing the coming demise of Enron, Kenneth Lay lied to the public, the corporation investors and Enron workers to buy the company stocks, even as he and other senior executives were cashing in on the shares and bailing out. Some of the stakeholders affected by Lay actions include the company shareholders most of whom were pensioners who had invested their life savings in stocks that eventually amounted to almost nothing as they lost their personal investments plus pensions. Secondly, his actions had a lasting impact on most o...
4 Pages(1000 words)Research Paper

It is for this reason that the CEO of the company recommends the creation of a model that brings an era whereby “under the model, creating commercial value and social value, commerce and justice were “inextricably linked”” (Austin, Leonard, and Quinn, 2004, p. 1). Reading through the case study, it could be noticed that there is the likelihood that there could arise a subsequent problem that has to do with the implementation of the designed model. This problem is projected in the face of having to satisfy the stake of all stakeholders to accepting the innovative business model as the most suitable for the present needs of the company. Identified "stakeholders" The running of any public interest organization such as Timberland can...
5 Pages(1250 words)Research Paper

...Introduction Ethics in Business play a critical role as the emergence of ethical consumers have made it hard for the organizations to maintain and achieve certain ethical standards in the overall conduct of their operations. Ethics can be viewed from different perspectives, for example, production processes of the organization may not be ethically functioning, and HR Practices may be exploitative such as in the case of Wal-Mart etc. Thus ethics need to be viewed in broader perspective and from different angles in order to correctly assess their role in the modern business. Summary of the article This case study is about the ethical issues related with the meat industry in US. This case study first review the historical development...
5 Pages(1250 words)Case Study

...﻿Business ethics case study Introduction: The term ‘business ethics’ is considered as one of the most significant aspects in corporate environments. It can be generally defined as the behavior adopted by a business to deal with its daily handlings. The term ’ethics’ is derived from the Greek word ’ethos’ signifying habitual conduct or character. In a wider context, an unethical conduct refers to immoral rule(s) of conduct to which the act of disapproval is more relevant. In terms of an organizational context, it can be argued that business ethics is particularly concerned with moral issues in business. Business ethics can be varied for different businesses. But it is important for a business to include good ethics. Further, the concerns...
7 Pages(1750 words)Essay

...ETHICS IN BUSINESS (CASE STUDY) By Presented to s The organization maintains policies and procedures that represent the code of ethics for the Chief Executive Office (CEO), officers and employees. The policy of our organization is to comply with all governmental laws, rules, and regulations applicable to our business. The aim of the organization is to choose the course of highest integrity. Local customs, traditions and mores must be recognized. But honesty cannot be criticized in any culture. Dishonesty simply results in demoralizing and reprehensible judgment. A well-founded reputation for conscientious transactions is itself an invaluable organizational asset. The organization cares how results are obtained, not just...
2 Pages(500 words)Essay

Unit Timberland: Discussion Questions Timberland is an American icon company that deals with footwear and outdoor accessories. The leading company created its reputation by producing simple and durable footwear. It gained its popularity due to its environmental stewardship. Timberland stakeholders include its employees, the other branch companies of timberland found in other countries, the partners of timberland such as Boston’s City Year, VF Corporation and family partnership. Timberland stakeholders’ map consists of stakeholders who are not in the other apparel companies. This is due to its competitive nature; timberland is a focused unique company as compared to other companies (Kurtz et al 113). It is famous for its increased...
2 Pages(500 words)Essay

...1. American Therapeutic Inc., the entire population of the United s that might one day be prescribed the drug, and the FDA. 2. Priority rank population of individuals that might one day be prescribed the drug, 2) American Therapeutic, 3) FDA 3. Ethical norms and principles were obviously violated by both the CEO of Vegesna and Chang; as both colluded to circumvent the law and engage in bribery as a means of promoting their own self interests above the safety of the population and the system of approval specified by the FDA. 4. The winners in this case were American Therapeutics and the individual Chang. Due to the fact that the drug manufacturer was able to effectively bribe Chang and circumvent the traditional procedure, the clear loser...
2 Pages(500 words)Case Study

...The Beech-Nut Case al Affiliation: The Beech-Nut Case The beach-nut case describes the ethics of different people inthe organization and how their decisions contributed to the crisis in the case. Each party involved made decisions that were influenced by their communication strategies. All the parties influenced the CEO to make a final decision in different ways. Parties involved Peter Anderson was the newly appointed CEO of the Beech nut corporation. He was supposed to revive the profitability of the company by supplying healthy products that would meet the standards set by Nestle. He was supposed to determine whether Beech nut would join PAI in filing a case against Universal Juice Company (Burke 1988). He was also supposed to decide...
2 Pages(500 words)Case Study
sponsored ads
Save Your Time for More Important Things
Let us write or edit the case study on your topic "Business Ethics in the Case of Timberland-City Year" with a personal 20% discount.
GRAB THE BEST PAPER

Let us find you another Case Study on topic Business Ethics in the Case of Timberland-City Year for FREE!