Comments (0)
Add to wishlistDelete from wishlist
Cite this document
Summary
The writer of the essay states that business ventures have a critical responsibility in solving social and environmental problems. Through the combination of input factors and the use of output, the business meets different needs of the society…
Download full paperFile format: .doc, available for editing
HIDE THIS PAPERGRAB THE BEST PAPER95.9% of users find it useful 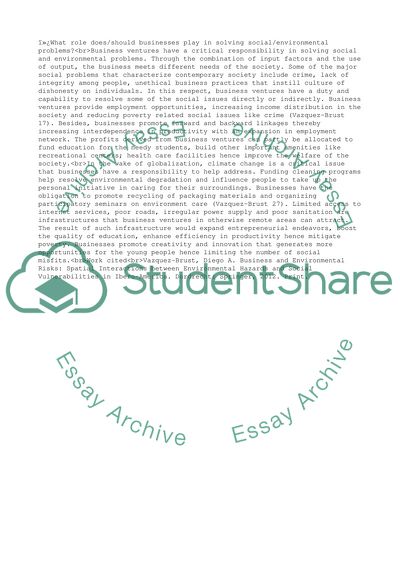 ﻿What role does/should businesses play in solving social/environmental problems?
Business ventures have a critical responsibility in solving social and environmental problems. Through the combination of input factors and the use of output, the business meets different needs of the society. Some of the major social problems that characterize contemporary society include crime, lack of integrity among people, unethical business practices that instill culture of dishonesty on individuals. In this respect, business ventures have a duty and capability to resolve some of the social issues directly or indirectly. Business ventures provide employment opportunities, increasing income distribution in the society and reducing poverty related social issues like crime (Vazquez-Brust 17). Besides, businesses promote forward and backward linkages thereby increasing interdependence in productivity with an expansion in employment network. The profits derived from business ventures can partly be allocated to fund education for the needy students, build other important amenities like recreational centers; health care facilities hence improve the welfare of the society.
In the wake of globalization, climate change is a critical issue that businesses have a responsibility to help address. Funding cleaning programs help resolve environmental degradation and influence people to take up the personal initiative in caring for their surroundings. Businesses have the obligation to promote recycling of packaging materials and organizing participatory seminars on environment care (Vazquez-Brust 27). Limited access to internet services, poor roads, irregular power supply and poor sanitation are infrastructures that business ventures in otherwise remote areas can attract. The result of such infrastructure would expand entrepreneurial endeavors, boost the quality of education, enhance efficiency in productivity hence mitigate poverty. Businesses promote creativity and innovation that generates more opportunities for the young people hence limiting the number of social misfits.
Work cited
Vazquez-Brust, Diego A. Business and Environmental Risks: Spatial Interactions between Environmental Hazards and Social Vulnerabilities in Ibero-America. Dordrecht: Springer, 2012. Print. Read More
Share:
Tags
Cite this document
(“What Role Should Businesses Play in Solving Social/Environmental Probl Assignment - 108”, n.d.)
What Role Should Businesses Play in Solving Social/Environmental Probl Assignment - 108. Retrieved from https://studentshare.org/business/1701775-any-topic-writeraposs-choice

“What Role Should Businesses Play in Solving Social/Environmental Probl Assignment - 108”, n.d. https://studentshare.org/business/1701775-any-topic-writeraposs-choice.
Comments (0)
Click to create a comment or rate a document

Ecological Modernisation as an approach for solving of Environmental problems

...; having to speak out; understanding some of the roles; and initial access problems, for example: "Those who didn't do the 'fun' stuff as well as the serious stuff." "Caused me a good deal of anxiety to participate." Discussion The findings above raise several key issues in relation to the role play. 1. What is role play and why use it 2. How different are face-to-face and online role play 3. Is role play a Western game culture and does that affect role engagement 4. How important is debriefing What is Role Play and why use it Crookwell, Oxford & Saunders (1987, p. 155) describe face-to-face role play as "a social or human activity in which participants "take on" or "act out" specified "roles" often within a predefined social framework...
8 Pages(2000 words)Essay

...If I was in a room with 4 other people and wanted to shake everyone's hand, four handshakes would happen. It gets trickier though if I wanted to know how many handshakes there would be if everyone wanted to shake everyone else's hand once. By using diagrams to find out how many handshakes would happen for different numbers of people, a pattern might be found. This pattern could make it much easier to solve the problem for even larger numbers of people. Patterns can be very helpful to find out the answers to mathematical problems. To find out how many handshakes there would be with 5 people in the room I had to make a diagram. At the top of my diagram I had colored five colored dots represent each person in the room. The first person...
3 Pages(750 words)Math Problem

...Decision Making and Problem Solving in US Steel (USS) Background US Steel is among the major steel producing companies worldwide and operates in theUS, Central Europe and Canada. Within the US, USS is currently the biggest domestically owned integrated producer of steel and ranks tenth worldwide in terms of sales. It was founded in 1991 and by 1907 was considered as the largest corporation and steel producer in the world. Just like any other company and business, USS experiences its own challenges in its day to day operations. This article will explore the challenges experienced by the logistics team at USS and examine possible options that could be applied in resolving these challenges. This article will also, among others, cover...
4 Pages(1000 words)Essay

This has been happening and now, the problem got hard. I woke up that night and went to confront the problem neighbor. We got into a serious exchange of words.
The surface problem was the loud music from the neighbor which interfered with sleep. The underlying problem was the neighbor did not like the fact that we had moved in. They wanted some of their friends to move in instead.
Knowing the neighbors and engaging in dialogue to address the problem was the best strategy to be employed. The strategies did not change since both of us had agreed to talk about the conflict out.
We agreed that the neighbors would play low music. Both of us won. We lived in harmony since the realized we were free neighbors.
The vari...
1 Pages(250 words)Essay

Worlds Environmental Problems and their Solving

This means the earth’s 7 billion stakeholders are those that will not literally pay for the resources that are extracted and sold to us, we will also pay for the economic hardships that are the result of this environmental exploitation. On the other hand, the companies who provide these products are benefiting themselves; oftentimes without even thinking of the damages they left have behind. It is obvious, however, that individuals are always looking to increase their income no matter the external costs. As such, this greed is one of the only reason that keeps companies and individuals from destroying the environment we share.
Yet, blame alone is not sufficient to solve this problem. Instead, standing and defeating these...
6 Pages(1500 words)Essay

What role does social class play

.... After reading both the novels, it can easily be studied that both the novels have prominent class divisions. The authors of both of these novels have discussed a) pride and prejudice in the British elite society and b) the socio-economic struggle to become powerful, rich in order to fit in the society. Undoubtedly, social class has been playing its role since the beginning of time and has been affecting the lives of individuals (as discussed in ‘the room at the top’) (Austen, 1853; Braine, 1957). It should be noted that the role of social class in society is rather negative than positive. It directly affects individuals in a negative manner forcing them to do things that are beyond their authority and strength in order to become an equal...
16 Pages(4000 words)Essay

...Management: CEO Role Play Abilities, Traits, Experiences that have support my achievements towards my current leadership position Ability In the year 2010, in May at the Stanford Graduate School of Business I was honored to deliver a speech on leadership. The title of my speech was ‘Change is driven by strong leaders’. With a detailed analysis of the central aspect of abilities I managed to include the main skills that did significantly support my ambition towards reaching greater heights in my career (Jeffrey, 2010). I addressed the following qualities of leadership in the aspect of abilities and also gave an explanation on how utilizing these abilities regularly did help in achieving a leadership position and maintain it as well. 1...
9 Pages(2250 words)Essay
sponsored ads
Save Your Time for More Important Things
Let us write or edit the assignment on your topic "What Role Should Businesses Play in Solving Social/Environmental Problems" with a personal 20% discount.
GRAB THE BEST PAPER

Let us find you another Assignment on topic What Role Should Businesses Play in Solving Social/Environmental Problems for FREE!