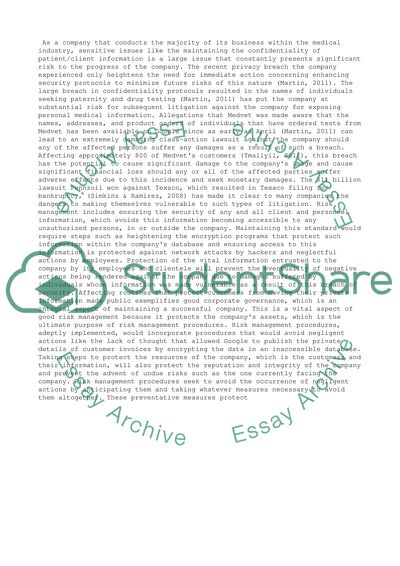 Download file to see previous pages As a company that conducts the majority of its business within the medical industry, sensitive issues like the maintaining the confidentiality of patient/client information is a large issue that constantly presents significant risk to the progress of the company. The recent privacy breach the company experienced only heightens the need for immediate action concerning enhancing security protocols to minimize future risks of this nature (Martin, 2011). The large breach in confidentiality protocols resulted in the names of individuals seeking paternity and drug testing (Martin, 2011) has put the company at substantial risk for subsequent litigation against the company for exposing personal medical information. Allegations that Medvet was made aware that the names, addresses, and product orders of individuals that have ordered tests from Medvet has been available on Google since as early as April (Martin, 2011) can lead to an extremely damaging class-action lawsuit against the company should any of the affected persons suffer any damages as a result of such a breach. Affecting approximately 800 of Medvet’s customers (Tmaliyil, 2011), this breach has the potential to cause significant damage to the company’s image and cause significant financial loss should any or all of the affected parties suffer adverse effects due to this incidence and seek monetary damages. The $11 billion lawsuit Pennzoil won against Texaco, which resulted in Texaco filing for bankruptcy, (Simkins & Ramirez, 2008) has made it clear to many companies the dangers to making themselves vulnerable to such types of litigation. Risk management includes ensuring the security of any and all client and personnel information, which avoids this information becoming accessible to any unauthorized persons, in or outside the company. Maintaining this standard would require steps such as heightening the encryption programs that protect such information within the company’s database and ensuring access to this information is protected against network attacks by hackers and neglectful actions by employees. Protection of the vital information entrusted to the company by its employees and clientele will prevent the eventuality of negative actions being rendered against the company due to damages suffered by individuals whose information was made vulnerable as a result of this breach of security. Affecting routines that protect customers from having their private information made public exemplifies good corporate governance, which is an integral aspect of maintaining a successful company. This is a vital aspect of good risk management because it protects the company’s assets, which is the ultimate purpose of risk management procedures. Risk management procedures, adeptly implemented, would incorporate procedures that would avoid negligent actions like the lack of thought that allowed Google to publish the private details of customer invoices by encrypting the data in an inaccessible database. Taking steps to protect the resources of the company, which is the customers and their information, will also protect the reputation and integrity of the company and prevent the advent of undue risks such as the one currently facing the company. Risk management procedures seek to avoid the occurrence of negligent actions by anticipating them and taking whatever measures necessary to avoid them altogether. These preventative measures protect ...Download file to see next pagesRead More
Share:
Tags
Cite this document
(“STRATEGIC LEGAL AND SOCIAL ISSUES Assignment Example | Topics and Well Written Essays - 750 words”, n.d.)
Retrieved from https://studentshare.org/business/1429846-strategic-legal-and-social-issues
(STRATEGIC LEGAL AND SOCIAL ISSUES Assignment Example | Topics and Well Written Essays - 750 Words)
https://studentshare.org/business/1429846-strategic-legal-and-social-issues.
“STRATEGIC LEGAL AND SOCIAL ISSUES Assignment Example | Topics and Well Written Essays - 750 Words”, n.d. https://studentshare.org/business/1429846-strategic-legal-and-social-issues.
Comments (0)
Click to create a comment or rate a document

CHECK THESE SAMPLES OF STRATEGIC LEGAL AND SOCIAL ISSUES

Erving Goffman was an astute observer of society, who immersed himself in the social environment which he was studying. He carefully observed and recorded the ways in which people’s behavior and interpersonal interactions are carried out in everyday life. He notes that “people perform their social roles and, as they do so, they produce social order through their actions and the regu...
6 Pages(1500 words)Article
sponsored ads
Save Your Time for More Important Things
Let us write or edit the assignment on your topic "STRATEGIC LEGAL AND SOCIAL ISSUES" with a personal 20% discount.
GRAB THE BEST PAPER

Let us find you another Assignment on topic STRATEGIC LEGAL AND SOCIAL ISSUES for FREE!