Comments (0)
Add to wishlistDelete from wishlist
Cite this document
Summary
This essay describes the environmental issues, legislations affecting the organization and policies of General Motors, that has been the global leader in the automotive industry since its inception, but recently it was overtaken by Japanese automaker Toyota. …
Download full paperFile format: .doc, available for editing
HIDE THIS PAPERGRAB THE BEST PAPER94.2% of users find it useful 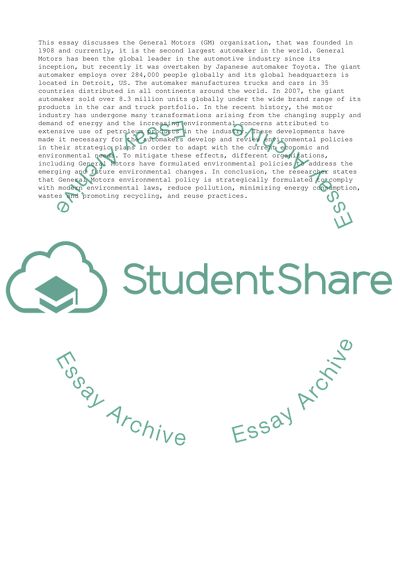 Extract of sample "Environmental Issues and Policies at General Motors"

Download file to see previous pages This essay discusses the General Motors (GM) organization, that was founded in 1908 and currently, it is the second largest automaker in the world. General Motors has been the global leader in the automotive industry since its inception, but recently it was overtaken by Japanese automaker Toyota. The giant automaker employs over 284,000 people globally and its global headquarters is located in Detroit, US. The automaker manufactures trucks and cars in 35 countries distributed in all continents around the world. In 2007, the giant automaker sold over 8.3 million units globally under the wide brand range of its products in the car and truck portfolio. In the recent history, the motor industry has undergone many transformations arising from the changing supply and demand of energy and the increasing environmental concerns attributed to extensive use of petroleum products in the industry. These developments have made it necessary for the automakers develop and review environmental policies in their strategic plans in order to adapt with the current economic and environmental needs. To mitigate these effects, different organizations, including General Motors have formulated environmental policies to address the emerging and future environmental changes. In conclusion, the researcher states that General Motors environmental policy is strategically formulated to comply with modern environmental laws, reduce pollution, minimizing energy consumption, wastes and promoting recycling, and reuse practices. ...Download file to see next pagesRead More
Share:
Tags
Cite this document
(“Environmental Issues and Policies at General Motors Essay”, n.d.)
Retrieved from https://studentshare.org/business/1421548-environmental-issues-and-policies-at-general-motors
(Environmental Issues and Policies at General Motors Essay)
https://studentshare.org/business/1421548-environmental-issues-and-policies-at-general-motors.
“Environmental Issues and Policies at General Motors Essay”, n.d. https://studentshare.org/business/1421548-environmental-issues-and-policies-at-general-motors.
Comments (0)
Click to create a comment or rate a document

CHECK THESE SAMPLES OF Environmental Issues and Policies at General Motors

...International trade International trade Introduction The Globalization, Liberalization and Privatization policies adopted by different countries, opened the doors widely open for international trade. Foreign investment and participation in business is welcomed by many countries. The consumers will get better products at cheap rates because of the competition in the market. For example, as per the economic principle, scarcity of a commodity creates demand in the market and hence the price of that commodity will go up. Because of the foreign participation in domestic market, the customers will never fee any scarcity and hence the prices will come down definitely. But most of the countries are still confused about the extent...
6 Pages(1500 words)Coursework
sponsored ads
Save Your Time for More Important Things
Let us write or edit the essay on your topic "Environmental Issues and Policies at General Motors" with a personal 20% discount.
GRAB THE BEST PAPER

Let us find you another Essay on topic Environmental Issues and Policies at General Motors for FREE!