Comments (0)
Add to wishlist Delete from wishlist
Cite this document
Summary
The main idea of this paper is to analyze the response of the UK government to the economic recession. The author gives detailed information about the United Kingdom hosts, the labor and international market, economists fear and the economic meltdown…
Download full paper File format: .doc, available for editing
HIDE THIS PAPERGRAB THE BEST PAPER98.7% of users find it useful 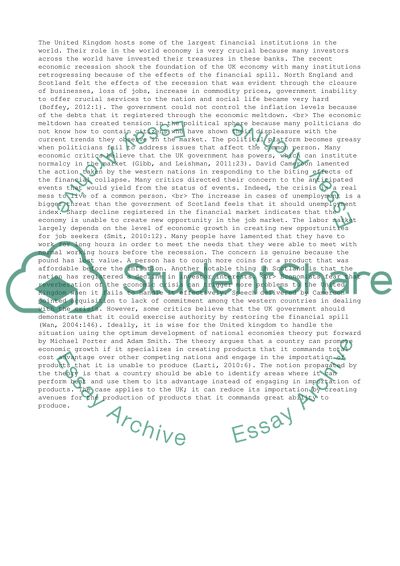 Download file to see previous pages The United Kingdom hosts some of the largest financial institutions in the world. Their role in the world economy is very crucial because many investors across the world have invested their treasures in these banks. The recent economic recession shook the foundation of the UK economy with many institutions retrogressing because of the effects of the financial spill. North England and Scotland felt the effects of the recession that was evident through the closure of businesses, loss of jobs, increase in commodity prices, government inability to offer crucial services to the nation and social life became very hard (Boffey, 2012:1). The government could not control the inflation levels because of the debts that it registered through the economic meltdown.
The economic meltdown has created tension in the political sphere because many politicians do not know how to contain citizens who have shown their displeasure with the current trends they observe in the market. The political platform becomes greasy when politicians fail to address issues that affect the common person. Many economic critics believe that the UK government has powers, which can institute normalcy in the market (Gibb, and Leishman, 2011:23). David Cameroon lamented the action taken by the western nations in responding to the biting effects of the financial collapse. Many critics directed their concern to the anticipated events that would yield from the status of events. Indeed, the crisis is a real mess to live of a common person.
The increase in cases of unemployment is a bigger threat than the government of Scotland feels that it should unemployment index. Sharp decline registered in the financial market indicates that the economy is unable to create new opportunity in the job market. The labor market largely depends on the level of economic growth in creating new opportunities for job seekers (Smit, 2010:12). Many people have lamented that they have to work for long hours in order to meet the needs that they were able to meet with normal working hours before the recession. The concern is genuine because the pound has lost value. A person has to cough more coins for a product that was affordable before the inflation. Another notable thing in Scotland is that the nation has registered a decline in investor interests.
Economists fear that reverberation of the economic crisis can trigger more problems to the United Kingdom when it fails to handle it effectively. Speech delivered by Cameroon pointed acquisition to lack of commitment among the western countries in dealing with the crisis. However, some critics believe that the UK government should demonstrate that it could exercise authority by restoring the financial spill (Wan, 2004:146). Ideally, it is wise for the United kingdom to handle the situation using the optimum development of national economies theory put forward by Michael Porter and Adam Smith. The theory argues that a country can promote economic growth if it specializes in creating products that it commands total cost advantage over other competing nations and engage in the importation of products that it is unable to produce (Larti, 2010:6). The notion propagated by the theory is that a country should be able to identify areas where it can perform best and use them to its advantage instead of engaging in importation of products. The case applies to the UK; it can reduce its importation by creating avenues for the production of products that it commands great ability to produce. ...Download file to see next pages Read More
Share:
Tags
Cite this document
(“Nternational Business Environment Essay Example | Topics and Well Written Essays - 1500 words”, n.d.)
Retrieved from https://studentshare.org/business/1397520-international-business-environment

An ethical scenario arose during my first six months in this management role involving a 21-year-old employee who I witnessed smoking pot in the parking lot over lunch break. This scenario demanded that I consider the needs of the employee, as well as satisfying my obligations for enforcing the strict drug use policy administered at the senior levels of the company. This project describes the ethical scenario in detail, offering personal reflections on the incident as well as suggesting an ethical framework for handling situations like this in the future.
The situation which occurred had a young worker smoking pot on his lunch break on the company grounds. This, according to policy, is a termination offense and it is expected...
7 Pages (1750 words) Case Study
sponsored ads
Save Your Time for More Important Things
Let us write or edit the essay on your topic "International Business Environment" with a personal 20% discount.
GRAB THE BEST PAPER

Let us find you another Essay on topic International Business Environment for FREE!