Comments (0)
Add to wishlistDelete from wishlist
Cite this document
Summary
The opening of the thesis report consists of the five skills which the researcher has gained and are presentable to the employer. They are self management skills; emotional competence; negotiation skills; communication competence; positive attitude…
Download full paperFile format: .doc, available for editing
HIDE THIS PAPERGRAB THE BEST PAPER93.5% of users find it useful 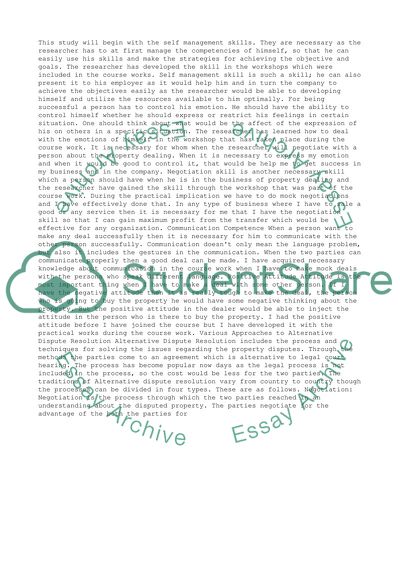 Download file to see previous pages This study will begin with the self management skills. They are necessary as the researcher has to at first manage the competencies of himself, so that he can easily use his skills and make the strategies for achieving the objective and goals. The researcher has developed the skill in the workshops which were included in the course works. Self management skill is such a skill; he can also present it to his employer as it would help him and in turn the company to achieve the objectives easily as the researcher would be able to developing himself and utilize the resources available to him optimally. For being successful a person has to control his emotion. He should have the ability to control himself whether he should express or restrict his feelings in certain situation. One should think about what would be the affect of the expression of his on others in a specific situation. The researcher has learned how to deal with the emotions of himself in the workshop that has taken place during the course work. It is necessary for whom when the researcher will negotiate with a person about the property dealing. When it is necessary to express my emotion and when it would be good to control it, that would be help me to get success in my business and in the company. Negotiation skill is another necessary skill which a person should have when he is in the business of property dealing and the researcher have gained the skill through the workshop that was part of the course work. During the practical implication we have to do mock negotiations and I have effectively done that. In any type of business where I have to sale a good or any service then it is necessary for me that I have the negotiation skill so that I can gain maximum profit from the transfer which would be effective for any organization. Communication Competence When a person want to make any deal successfully then it is necessary for him to communicate with the other person successfully. Communication doesn’t only mean the language problem, but also it includes the gestures in the communication. When the two parties can communicate properly then a good deal can be made. I have acquired necessary knowledge about communication in the course work when I have to make mock deals with the persons who speak different language. Positive Attitude Attitude is the most important thing when I have to make a deal with some other person. If I have the negative attitude then it is really tough to make the deal, the person who is going to buy the property he would have some negative thinking about the property. But the positive attitude in the dealer would be able to inject the attitude in the person who is there to buy the property. I had the positive attitude before I have joined the course but I have developed it with the practical works during the course work. Various Approaches to Alternative Dispute Resolution Alternative Dispute Resolution includes the process and techniques for solving the issues regarding the property disputes. Through the methods the parties come to an agreement which is alternative to legal court hearing. The process has become popular now days as the legal process is not included in the process, so the cost would be less for the two parties. The traditions of Alternative dispute resolution vary from country to country though the processes can be divided in four types. These are as follows. Negotiation: Negotiation is the process through which the two parties reached in an understanding about the disputed property. The parties negotiate for the advantage of the both the parties for ...Download file to see next pagesRead More
Share:
Tags
Cite this document
(“Property Business Skills Term Paper Example | Topics and Well Written Essays - 2500 words”, n.d.)
Retrieved from https://studentshare.org/business/1395268-portfolio
(Property Business Skills Term Paper Example | Topics and Well Written Essays - 2500 Words)
https://studentshare.org/business/1395268-portfolio.
“Property Business Skills Term Paper Example | Topics and Well Written Essays - 2500 Words”, n.d. https://studentshare.org/business/1395268-portfolio.
Comments (0)
Click to create a comment or rate a document

On the other hand, these globalization standards are opposed by some critics and argue that globalization does not have to be a requirement for putting up a business in other countries, thus it is just a choice for entering a foreign market. Accordingly, standardization is applicable specifically to high-end markets and with accord to the market segmentation such as the trends that the young people patronize (Mullman, 2006) Regardless of the idea that globalization is mostly based on how the company standardizes the products, the home country still holds the profitability of the business as the economy affects how the foreign investors and other national sources back up the business (Stiglitz, 2006).
Making the world flat mak...
9 Pages(2250 words)Assignment
sponsored ads
Save Your Time for More Important Things
Let us write or edit the term paper on your topic "Property Business Skills" with a personal 20% discount.
GRAB THE BEST PAPER

Let us find you another Term Paper on topic Property Business Skills for FREE!