Comments (0)
Add to wishlist Delete from wishlist
Cite this document
Summary
This essay discusses the causes for ethical concerns in the Chinese economy, effects of business ethics on various aspects of society, and the role of a business manager in the management of business ethics in the Chinese economy. …
Download full paper File format: .doc, available for editing
HIDE THIS PAPERGRAB THE BEST PAPER92.7% of users find it useful 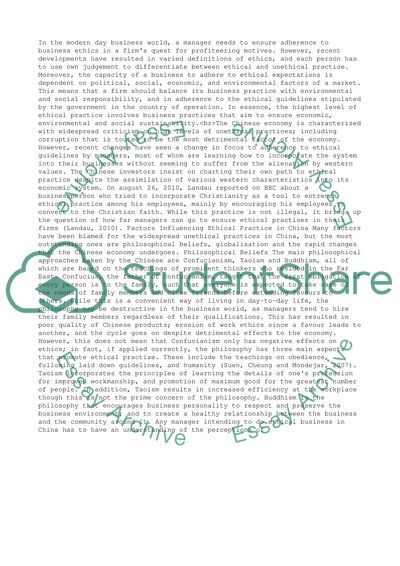 Download file to see previous pages In the modern day business world, a manager needs to ensure adherence to business ethics in a firm’s quest for profiteering motives. However, recent developments have resulted in varied definitions of ethics, and each person has to use own judgement to differentiate between ethical and unethical practise. Moreover, the capacity of a business to adhere to ethical expectations is dependent on political, social, economic, and environmental factors of a market. This means that a firm should balance its business practice with environmental and social responsibility, and in adherence to the ethical guidelines stipulated by the government in the country of operation. In essence, the highest level of ethical practice involves business practices that aim to ensure economic, environmental and social sustainability.
The Chinese economy is characterized with widespread criticism on high levels of unethical practices; including corruption that is touted to be the most detrimental factor of the economy. However, recent changes have seen a change in focus to adherence to ethical guidelines by managers, most of whom are learning how to incorporate the system into their businesses without seeming to suffer from the alienation by western values. The Chinese investors insist on charting their own path to ethical practice despite the assimilation of various western characteristics into its economic system. On august 26, 2010, Landau reported on BBC about a businessperson who tried to incorporate Christianity as a tool to entrench ethical practice among his employees, mainly by encouraging his employees to convert to the Christian faith. While this practice is not illegal, it brings up the question of how far managers can go to ensure ethical practises in their firms (Landau, 2010). Factors Influencing Ethical Practice in China Many factors have been blamed for the widespread unethical practices in China, but the most outstanding ones are philosophical beliefs, globalisation and the rapid changes that the Chinese economy undergoes. Philosophical Beliefs The main philosophical approaches taken by the Chinese are Confucianism, Taoism and Buddhism, all of which are based on the teachings of prominent thinkers who resided in the Far East. Confucius, the father of Confucianism, taught that the first obligation of every person is to the family, such that everyone is expected to take care of the needs of family members and close friends before extending favours to others. While this is a convenient way of living in day-to-day life, the philosophy may be destructive in the business world, as managers tend to hire their family members regardless of their qualifications. This has resulted in poor quality of Chinese products; erosion of work ethics since a favour leads to another, and the cycle goes on despite detrimental effects to the economy. However, this does not mean that Confucianism only has negative effects on ethics; in fact, if applied correctly, the philosophy has three main aspects that promote ethical practise. These include the teachings on obedience, following laid down guidelines, and humanity (Suen, Cheung and Mondejar, 2007). Taoism incorporates the principles of learning the details of one's profession for improved workmanship, and promotion of maximum good for the greatest number of people. In addition, Taoism results in increased efficiency at the workplace though this is not the prime concern of the philosophy. Buddhism is the philosophy that encourages business personality to respect and preserve the business environment; and to create a healthy relationship between the business and the community around it. Any manager intending to do ethical business in China has to have an understanding of the perceptions of ...Download file to see next pages Read More
Share:
Tags
Cite this document
(“Managing business ethics in China Essay Example | Topics and Well Written Essays - 1750 words”, n.d.)
Retrieved from https://studentshare.org/business/1394848-essay

CHECK THESE SAMPLES OF Managing business ethics in China

An ethical scenario arose during my first six months in this management role involving a 21-year-old employee who I witnessed smoking pot in the parking lot over lunch break. This scenario demanded that I consider the needs of the employee, as well as satisfying my obligations for enforcing the strict drug use policy administered at the senior levels of the company. This project describes the ethical scenario in detail, offering personal reflections on the incident as well as suggesting an ethical framework for handling situations like this in the future.
The situation which occurred had a young worker smoking pot on his lunch break on the company grounds. This, according to policy, is a termination offense and it is expected...
7 Pages (1750 words) Case Study
sponsored ads
Save Your Time for More Important Things
Let us write or edit the essay on your topic "Managing business ethics in China" with a personal 20% discount.
GRAB THE BEST PAPER

Let us find you another Essay on topic Managing business ethics in China for FREE!