Impact of Globalisation on the Cultural Environment of Business - Essay Example

Comments (0)
Add to wishlist Delete from wishlist
Cite this document
Summary
Globalisation refers to the process of building global relationship among people, economy, and culture of different countries. It involves distribution of the services and the goods in the global marketplace. Globalisation also reduces the trade barriers such as, import quotas, tariffs and export fees among others. …
Download full paper File format: .doc, available for editing
HIDE THIS PAPERGRAB THE BEST PAPER97.4% of users find it useful 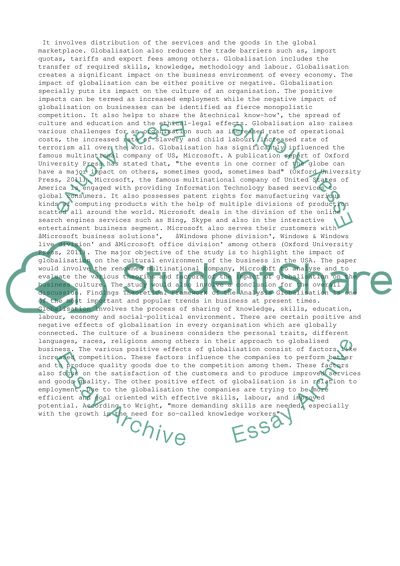 Download file to see previous pages It involves distribution of the services and the goods in the global marketplace. Globalisation also reduces the trade barriers such as, import quotas, tariffs and export fees among others. Globalisation includes the transfer of required skills, knowledge, methodology and labour. Globalisation creates a significant impact on the business environment of every economy. The impact of globalisation can be either positive or negative. Globalisation specially puts its impact on the culture of an organisation. The positive impacts can be termed as increased employment while the negative impact of globalisation on businesses can be identified as fierce monopolistic competition. It also helps to share the ‘technical know-how’, the spread of culture and education and the ethical-legal effects. Globalisation also raises various challenges for an organisation such as increased rate of operational costs, the increased rate of slavery and child labour, increased rate of terrorism all over the world. Globalisation has significantly influenced the famous multinational company of US, Microsoft. A publication report of Oxford University Press has stated that, “the events in one corner of the globe can have a major impact on others, sometimes good, sometimes bad” (Oxford University Press, 2011). Microsoft, the famous multinational company of United States of America is engaged with providing Information Technology based services to global consumers. It also possesses patent rights for manufacturing various kinds of computing products with the help of multiple divisions of production scatted all around the world. Microsoft deals in the division of the online search engines services such as Bing, Skype and also in the interactive entertainment business segment. Microsoft also serves their customers with ‘Microsoft business solutions’, ‘Windows phone division’, Windows & Windows live division’ and ‘Microsoft office division’ among others (Oxford University Press, 2011). The major objective of the study is to highlight the impact of globalisation on the cultural environment of the business in the USA. The paper would involve the renowned multinational company, Microsoft to analyse and to evaluate the various theories and factors of the impact of globalisation on the business culture. The study would also involve a conclusion for the overall discussion. Findings Theoretical Framework of the Analysis Globalisation is one of the most important and popular trends in business at present times. Globalisation involves the process of sharing of knowledge, skills, education, labour, economy and social-political environment. There are certain positive and negative effects of globalisation in every organisation which are globally connected. The culture of a business considers the personal traits, different languages, races, religions among others in their approach to globalised business. The various positive effects of globalisation consist of factors like increased competition. These factors influence the companies to perform better and to produce quality goods due to the competition among them. These factors also focus on the satisfaction of the customers and to produce improved services and goods quality. The other positive effect of globalisation is in relation to employment. Due to the globalisation the companies are trying to be more efficient and goal oriented with effective skills, labour, and improved potential. According to Wright, “more demanding skills are needed, especially with the growth in the need for so-called knowledge workers” ...Download file to see next pages Read More
Share:
Tags
Cite this document
(“Impact of Globalisation on the Cultural Environment of Business Essay”, n.d.)
Retrieved from https://studentshare.org/business/1394265-impact-of-globalisation-on-the-cultural

(Impact of Globalisation on the Cultural Environment of Business Essay)
https://studentshare.org/business/1394265-impact-of-globalisation-on-the-cultural.

“Impact of Globalisation on the Cultural Environment of Business Essay”, n.d. https://studentshare.org/business/1394265-impact-of-globalisation-on-the-cultural.
Comments (0)
Click to create a comment or rate a document

An ethical scenario arose during my first six months in this management role involving a 21-year-old employee who I witnessed smoking pot in the parking lot over lunch break. This scenario demanded that I consider the needs of the employee, as well as satisfying my obligations for enforcing the strict drug use policy administered at the senior levels of the company. This project describes the ethical scenario in detail, offering personal reflections on the incident as well as suggesting an ethical framework for handling situations like this in the future.
The situation which occurred had a young worker smoking pot on his lunch break on the company grounds. This, according to policy, is a termination offense and it is expected...
7 Pages (1750 words) Case Study
sponsored ads
Save Your Time for More Important Things
Let us write or edit the essay on your topic "Impact of Globalisation on the Cultural Environment of Business" with a personal 20% discount.
GRAB THE BEST PAPER

Let us find you another Essay on topic Impact of Globalisation on the Cultural Environment of Business for FREE!