Comments (0)
Add to wishlistDelete from wishlist
Cite this document
Summary
Strategic Thinking for Wal-Mart 1.0 Introduction Today, creating a better future for the organization is the most difficult task of a manager, leader or executive. The future is unforeseeable and planning alone will not guarantee success; thus, organizations need people who have the capacity to deliver an ideal future…
Download full paperFile format: .doc, available for editing
HIDE THIS PAPERGRAB THE BEST PAPER94% of users find it useful 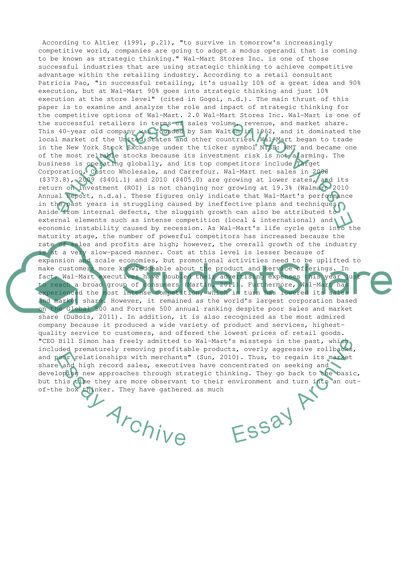 Download file to see previous pages According to Altier (1991, p.21), “to survive in tomorrow’s increasingly competitive world, companies are going to adopt a modus operandi that is coming to be known as strategic thinking.” Wal-Mart Stores Inc. is one of those successful industries that are using strategic thinking to achieve competitive advantage within the retailing industry. According to a retail consultant Patricia Pao, “in successful retailing, it’s usually 10% of a great idea and 90% execution, but at Wal-Mart 90% goes into strategic thinking and just 10% execution at the store level” (cited in Gogoi, n.d.). The main thrust of this paper is to examine and analyze the role and impact of strategic thinking for the competitive options of Wal-Mart. 2.0 Wal-Mart Stores Inc. Wal-Mart is one of the successful retailers in terms of sales volume, revenue, and market share. This 40-year old company was founded by Sam Walton in 1962, and it dominated the local market of the United States and other countries. Wal-Mart began to trade in the New York Stock Exchange under the ticker symbol NYSE: WMT and became one of the most reliable stocks because its investment risk is not alarming. The business is operating globally, and its top competitors include Target Corporation, Costco Wholesale, and Carrefour. Wal-Mart net sales in 2008 ($373.8), 2009 ($401.1) and 2010 ($405.0) are growing at lower rates, and its return on investment (ROI) is not changing nor growing at 19.3% (Walmart 2010 Annual Report, n.d.a). These figures only indicate that Wal-Mart’s performance in the past years is struggling caused by ineffective plans and techniques. Aside from internal defects, the sluggish growth can also be attributed to external elements such as intense competition (local & international) and economic instability caused by recession. As Wal-Mart’s life cycle gets into the maturity stage, the number of powerful competitors has increased because the rate of sales and profits are high; however, the overall growth of the industry is at a very slow-paced manner. Cost at this level is lesser because of expansion and scale economies, but promotional activities need to be uplifted to make customers more knowledgeable about the product and service offerings. In fact, Wal-Mart executives have doubled their advertising expenses this year just to reach a broad group of consumers (Martin, 2011). Furthermore, Wal-Mart has experienced the most intense competition, which in turn has lowered its sales and market share. However, it remained as the world’s largest corporation based on the Global 500 and Fortune 500 annual ranking despite poor sales and market share (DuBois, 2011). In addition, it is also recognized as the most admired company because it produced a wide variety of product and services, highest-quality service to customers, and offered the lowest prices of retail goods. “CEO Bill Simon has freely admitted to Wal-Mart’s missteps in the past, which included prematurely removing profitable products, overly aggressive rollbacks, and poor relationships with merchants” (Sun, 2010). Thus, to regain its market share and high record sales, executives have concentrated on seeking and developing new approaches through strategic thinking. They go back to the basic, but this time they are more observant to their environment and turn into an out-of-the box thinker. They have gathered as much ...Download file to see next pagesRead More
Share:
Tags
Cite this document
(“Strategic Thinking for Wal-Mart business Essay Example | Topics and Well Written Essays - 3000 words”, n.d.)
Retrieved from https://studentshare.org/business/1393120-business-in-focus
(Strategic Thinking for Wal-Mart Business Essay Example | Topics and Well Written Essays - 3000 Words)
https://studentshare.org/business/1393120-business-in-focus.
“Strategic Thinking for Wal-Mart Business Essay Example | Topics and Well Written Essays - 3000 Words”, n.d. https://studentshare.org/business/1393120-business-in-focus.
Comments (0)
Click to create a comment or rate a document

CHECK THESE SAMPLES OF Strategic Thinking for Wal-Mart business

On the other hand, these globalization standards are opposed by some critics and argue that globalization does not have to be a requirement for putting up a business in other countries, thus it is just a choice for entering a foreign market. Accordingly, standardization is applicable specifically to high-end markets and with accord to the market segmentation such as the trends that the young people patronize (Mullman, 2006) Regardless of the idea that globalization is mostly based on how the company standardizes the products, the home country still holds the profitability of the business as the economy affects how the foreign investors and other national sources back up the business (Stiglitz, 2006).
Making the world flat mak...
9 Pages(2250 words)Assignment
sponsored ads
Save Your Time for More Important Things
Let us write or edit the essay on your topic "Strategic Thinking for Wal-Mart business" with a personal 20% discount.
GRAB THE BEST PAPER

Let us find you another Essay on topic Strategic Thinking for Wal-Mart business for FREE!