Comments (0)
Add to wishlist Delete from wishlist
Cite this document
Summary
The study evaluates the extent to which cultural issues may impact upon international management and upon selling strategies in international commerce. Included in this document is the global nature of current business organizations and the location factors that affect international operation. …
Download full paper File format: .doc, available for editing
HIDE THIS PAPERGRAB THE BEST PAPER96.6% of users find it useful 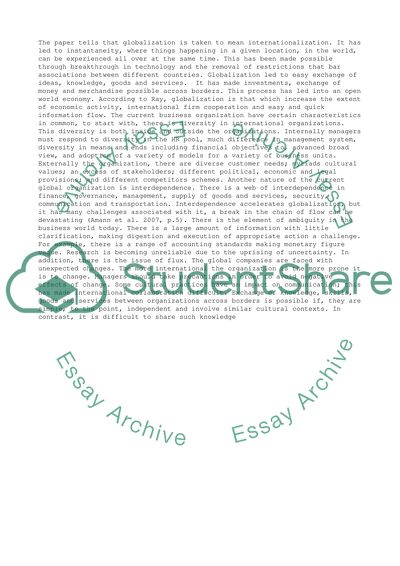 Download file to see previous pages The paper tells that globalization is taken to mean internationalization. It has led to instantaneity, where things happening in a given location, in the world, can be experienced all over at the same time. This has been made possible through breakthrough in technology and the removal of restrictions that bar associations between different countries. Globalization led to easy exchange of ideas, knowledge, goods and services. It has made investments, exchange of money and merchandise possible across borders. This process has led into an open world economy. According to Ray, globalization is that which increase the extent of economic activity, international firm cooperation and easy and quick information flow. The current business organization have certain characteristics in common, to start with, there is diversity in international organizations. This diversity is both inside and outside the organizations. Internally managers must respond to diversity in the HR pool, much difference in management system, diversity in means and ends including financial objectives to, advanced broad view, and adoption of a variety of models for a variety of business units. Externally the organization, there are diverse customer needs; myriads cultural values; an excess of stakeholders; different political, economic and legal provisions; and different competitors schemes. Another nature of the current global organization is interdependence. There is a web of interdependence in finance, governance, management, supply of goods and services, security, communication and transportation. Interdependence accelerates globalization, but it has many challenges associated with it, a break in the chain of flow can be devastating (Amann et al. 2007, p.5). There is the element of ambiguity in the business world today. There is a large amount of information with little clarification, making digestion and execution of appropriate action a challenge. For example, there is a range of accounting standards making monetary figure vague. Research is becoming unreliable due to the uprising of uncertainty. In addition, there is the issue of flux. The global companies are faced with unexpected changes. The more international the organization is the more prone it is to change. Managers should take precautions in order to avoid negative effects of change. Some cultural practices have an impact on communication; this has made international collaboration difficult. Exchange of knowledge, skills, goods and services between organizations across borders is possible if, they are simple, to the point, independent and involve similar cultural contexts. In contrast, it is difficult to share such knowledge ...Download file to see next pages Read More
Share:
Tags
Cite this document
(“Cultural Issues in International Organizations Essay”, n.d.)
Retrieved de https://studentshare.org/business/1392864-cultural-issues-in-international-organisations

CHECK THESE SAMPLES OF Cultural Issues in International Organizations

The continuous changes in the international area have created the necessity for a flexible legal framework that could achieve the above target. However, in order for such a task to be successful, there must be a specific theoretical ‘vehicle’ that could present with accuracy both the existing situation, the problems under examination and the desired result. Towards that direction, the creation of the ‘international human rights’ sector gave to the nations the chance to organize their internal legal rules and their behaviour in the global area in the basis of a specific set of principles recognized by the international community as binding and directly applied in the interior of the participated countries. I...
10 Pages (2500 words) Assignment

As a matter of fact, Hoffman’s statement that “international affairs is the nemesis of liberalism” has a grain of truth in it and this is especially so after the 9/11 incident.
There are two schools of thought or perspectives that are used to view international affairs: liberalism and realism. The study of these two perspectives is significant to the idea posed by Stanley Hoffman because they determine the reasons why international affairs, according to him, does not only see eye-to-eye with liberalism but seems to stand on the opposing side of it.
Liberalism can be defined as having four elements: citizens; the legislature; property rights, and; a market-driven economy (Dunne 186). Realism, on the othe...
6 Pages (1500 words) Assignment
sponsored ads
Save Your Time for More Important Things
Let us write or edit the essay on your topic "Cultural Issues in International Organizations" with a personal 20% discount.
GRAB THE BEST PAPER

Let us find you another Essay on topic Cultural Issues in International Organizations for FREE!