The Impact of Mediation in Business Decisions - Research Proposal Example

Comments (0)
Add to wishlistDelete from wishlist
Cite this document
Summary
Disputes in business abound all around the world just like in other areas of life, ranging from inter-business disputes to those occurring within an organization. Examples of such disputes among businesses include cases of broken contracts, sale of defective products to each other and intellectual property issues. …
Download full paperFile format: .doc, available for editing
HIDE THIS PAPERGRAB THE BEST PAPER92.7% of users find it useful 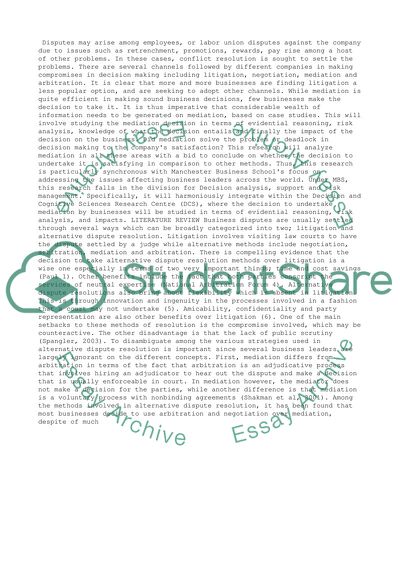 Extract of sample "The Impact of Mediation in Business Decisions"

Download file to see previous pages Disputes may arise among employees, or labor union disputes against the company due to issues such as retrenchment, promotions, rewards, pay rise among a host of other problems. In these cases, conflict resolution is sought to settle the problems. There are several channels followed by different companies in making compromises in decision making including litigation, negotiation, mediation and arbitration. It is clear that more and more businesses are finding litigation a less popular option, and are seeking to adopt other channels. While mediation is quite efficient in making sound business decisions, few businesses make the decision to take it. It is thus imperative that considerable wealth of information needs to be generated on mediation, based on case studies. This will involve studying the mediation decision in terms of evidential reasoning, risk analysis, knowledge of what the decision entails and finally the impact of the decision on the business. Did mediation solve the problem or deadlock in decision making to the company’s satisfaction? This research will analyze mediation in all these areas with a bid to conclude on whether the decision to undertake it is satisfying in comparison to other methods. Thus, this research is particularly synchronous with Manchester Business School’s focus on addressing the issues affecting business leaders across the world. Under MBS, this research falls in the division for Decision analysis, support and risk management. Specifically, it will harmoniously integrate within the Decision and Cognitive Sciences Research Centre (DCS), where the decision to undertake mediation by businesses will be studied in terms of evidential reasoning, risk analysis, and impacts. LITERATURE REVIEW Business disputes are usually settled through several ways which can be broadly categorized into two; litigation and alternative dispute resolution. Litigation involves visiting law courts to have the dispute settled by a judge while alternative methods include negotiation, arbitration, mediation and arbitration. There is compelling evidence that the decision to take alternative dispute resolution methods over litigation is a wise one especially in terms of two very important things; time and cost savings (Paul 1). Other benefits include the fact that both parties conscript the services of neutral expertise (National Arbitration Forum 4). Alternative dispute resolutions also bring about flexibility which is absent in litigation. This is through innovation and ingenuity in the processes involved in a fashion that a court may not undertake (5). Amicability, confidentiality and party representation are also other benefits over litigation (6). One of the main setbacks to these methods of resolution is the compromise involved, which may be counteractive. The other disadvantage is that the lack of public scrutiny (Spangler, 2003). To disambiguate among the various strategies used in alternative dispute resolution is important since several business leaders are largely ignorant on the different concepts. First, mediation differs from arbitration in terms of the fact that arbitration is an adjudicative process that involves hiring an adjudicator to hear out the dispute and make a decision that is usually enforceable in court. In mediation however, the mediator does not make a decision for the parties, while another difference is that mediation is a voluntary process with nonbinding agreements (Shakman et al, 2001). Among the methods involved in alternative dispute resolution, it has been found that most businesses decide to use arbitration and negotiation over mediation, despite of much ...Download file to see next pagesRead More
Share:
Tags
Cite this document
(“The Impact of Mediation in Business Decisions Research Proposal”, n.d.)
Retrieved de https://studentshare.org/business/1391096-how-mediation-affects-business-decisions
(The Impact of Mediation in Business Decisions Research Proposal)
https://studentshare.org/business/1391096-how-mediation-affects-business-decisions.
“The Impact of Mediation in Business Decisions Research Proposal”, n.d. https://studentshare.org/business/1391096-how-mediation-affects-business-decisions.
Comments (0)
Click to create a comment or rate a document

CHECK THESE SAMPLES OF The Impact of Mediation in Business Decisions

On the other hand, these globalization standards are opposed by some critics and argue that globalization does not have to be a requirement for putting up a business in other countries, thus it is just a choice for entering a foreign market. Accordingly, standardization is applicable specifically to high-end markets and with accord to the market segmentation such as the trends that the young people patronize (Mullman, 2006) Regardless of the idea that globalization is mostly based on how the company standardizes the products, the home country still holds the profitability of the business as the economy affects how the foreign investors and other national sources back up the business (Stiglitz, 2006).
Making the world flat mak...
9 Pages(2250 words)Assignment
sponsored ads
Save Your Time for More Important Things
Let us write or edit the research proposal on your topic "The Impact of Mediation in Business Decisions" with a personal 20% discount.
GRAB THE BEST PAPER

Let us find you another Research Proposal on topic The Impact of Mediation in Business Decisions for FREE!