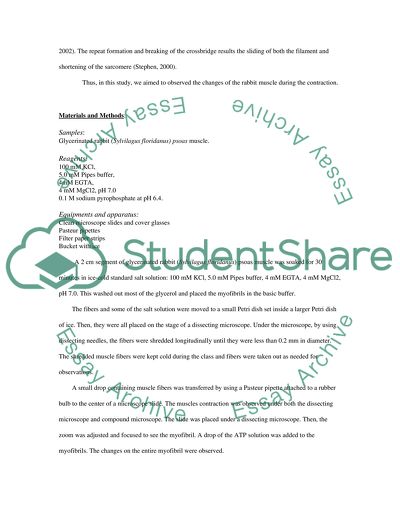 Download file to see previous pages Muscle contraction is a very important physiological behavior to human. All physical movement for example lifting arms, swallowing food, heart beating involved muscles contraction. The mechanism of muscle contraction is studied by a lot of researchers.However, the most widely accepted theory was the “filament sliding model” proposed by Huxley and Niedergerke (1954), and Huxley and Hanson (1954). A skeletal muscle is made up of subunits called the fasicles. Fasicles are bundles of elongated muscle fibers which extend for the length of the muscle. The muscle fiber is segmented into distinct sectional bands. Within each muscle cell are numerous myofibrils, which also extend for the length of the muscle cell. Sarcomeres are the basic contractile subunit of myofibrils. Within the myofibrils subunit, there are thin and thick filaments. The thin filament is made up of actin while the thick filament is made up of myosin. These two filaments are the main constituent of the filament sliding model. During a muscle contraction, a crossbridge cycle was initiated. When the nervous system sends a synaptic signal to the muscle fiber through the release of acetylcholine into the synaptic clefts, it causes the sarcoplasmic reticulum to release calcium ion Ca2+. Ca2+ binds to the troponin. This activated the myosin ATPase and ATP is hydrolyzed by to ADP and Pi. ATP initially dissociates actomyosin into actin and myosin; i.e. the thick filaments will be detached from the thin filaments. It is bind to the myosin head in the thick filaments. ...
It is thought that the energy stored in the myosin molecule brings about a conformational change in the crossbridge tilting the angle from 90o to 45o. This tilting pulls the actin filament about 10 nm toward the center of the sarcomere, while the energy stored in myosin is utilized (Barane and Barane, 2002). The repeat formation and breaking of the crossbridge results the sliding of both the filament and shortening of the sarcomere (Stephen, 2000).
Thus, in this study, we aimed to observed the changes of the rabbit muscle during the contraction.
Materials and Methods:
Samples:
Glycerinated rabbit (Sylvilagus floridanus) psoas muscle.
Reagents:
100 mM KCl,
5.0 mM Pipes buffer,
4mM EGTA,
4 mM MgCl2, pH 7.0
0.1 M sodium pyrophosphate at pH 6.4.
Equipments and apparatus:
Clean microscope slides and cover glasses
Pasteur pipettes
Filter paper strips
Bucket with ice
A 2 cm segment of glycerinated rabbit (Sylvilagus floridanus) psoas muscle was soaked for 30 minutes in ice-cold standard salt solution: 100 mM KCl, 5.0 mM Pipes buffer, 4 mM EGTA, 4 mM MgCl2, pH 7.0. This washed out most of the glycerol and placed the myofibrils in the basic buffer.
The fibers and some of the salt solution were moved to a small Petri dish set inside a larger Petri dish of ice. Then, they were all placed on the stage of a dissecting microscope. Under the microscope, by using dissecting needles, the fibers were shredded longitudinally until they were less than 0.2 mm in diameter. The shredded muscle fibers were kept cold during the class and fibers were taken out as needed for observations.
A small drop containing muscle fibers was transferred by using a Pasteur pipette attached to a rubber bulb to the ...Download file to see next pagesRead More
Share:
Tags
Cite this document
(“Actin-based cell motility: myofibril contraction Essay”, n.d.)
Retrieved from https://studentshare.org/biology/1530518-actin-based-cell-motility-myofibril-contraction

...first. In addition, private businesses emanated to cater to the desire of families who want to preserve the umbilical cord of their newborn for any future use through sophisticated storage facilities. This goes with a substantial payment, though, required from the customers. But for healthcare institutions that accept stem cell donations, all of the fees entailed in the procedure shall only be shouldered by the requesting party. Problem is, it is hardly easy for families to scout for the qualified donors. II. Discussion/ Analysis Although there is a considerable part of the global population that raises strong objections against stem cell technology based on ethical and moral grounds,...
6 Pages(1500 words)Term Paper

...% are commonly detected (Berg, et al., 2002). It is essential to detect minute quantities of a specific protein molecule in the presence of several other protein molecules, like for instance the presence of viral proteins in blood circulation. Very minute quantities of a protein molecule of interest concern in a cell or in the human blood can be determined by an immunoassay procedure which is called Western blotting. A sample is subjected to electrophoresis on an SDS-polyacrylamide gel. Blotting or more commonly called electroblotting moves the resolved protein molecules on the SDS-polyacrylamide gel to the surface of a polymer sheet in order to have the proteins more obtainable during the reaction. A specific antibody...
7 Pages(1750 words)Essay

...? SKELETAL MUSCLE CONTRACTION Skeletal Muscle Contraction Skeletal Muscle constitutes 40% of themuscles in the human body while the smooth muscle and the cardiac muscle form 10% of the entire muscle content. Skeletal muscle fibres are the voluntary group of muscles that are range from the small muscles in the eyes to the large and powerful muscles in the calf that cause leg movements. Anatomically skeletal muscles are composed of a number of fibres and each fibre is then further composed of smaller sub-units. These smaller fibres are called as myofibrils. The cell membrane of the muscle fibre is called as the sarcolemma which fuses at the end of each muscle fibre with the...
8 Pages(2000 words)Essay

...Social Contraction vs. Ethical Egoism The need to describe or establish ground rules on how people behave or ought to behave led philosophers to theorize immensely. There are many theories that try to assert certain obligatory aspects in regard to morality with little success. Some of the main examples include social contraction theory and ethical egoism. However, each theory requires an analysis so as to declare it redundant or otherwise. Social contract theory recognizes that human beings value their self interests (Shafer-Landau 189). This theory also holds that it is alright to be this way; it is rational. However, in the real world, if everybody blindly followed their hearts desires...
6 Pages(1500 words)Essay

...Comparison of Plant Cells and Animal Cells The most significant similarity between plant cells and animal cells is that they are both eukaryotic. Ofthe two classes of cell types eukaryotic and prokaryotic, all plants and animals are composed of cells from the former group while all bacteria and cyanobacteria fall into the later group. The macromolecular components of the prokaryotic cell are relatively basic compared to their eukaryotic counterparts. Eukaryotic cells in contrast are much more complex and take a longer time to replicate during cellular division. One defining feature of the eukaryotic...
2 Pages(500 words)Essay

..., the smooth muscles also contain actin and myosin, but since the myofibrillar structure is not available, they are either anchored to the plasma membrane or the dense cytoplasmic structures, functionally identical to the Z lines in the striated muscles. The orientation of the fibers are diagonal to the long axis of the cell, resulting into a situation where with contraction, the regions of the plasma membrane between the actin attachment points to the membrane balloon out. As mentioned earlier, the banding pattern is absent in the smooth muscles since the thick and thin filaments are not organized into myofibrils leading to the absence of a banding...
5 Pages(1250 words)Essay

Solution for a problem in the contraction

...College Contraction Problem Davenport development deals with commercial rental properties, which suggest the company has to maximize its profits while minimizing the costs involved. As such, any property that the company deals with has to be a profitable venture with the best rates of return possible and the least costs incurred in development of the property. In the case above, getting a loan from the city council ensures that Davenport does not have to finance the development program. Moreover, the requirement that the companies keeps the building in its original use for another ten years and receive reimbursement of the mortgage is a good incentive, which davenport has to pursue. All the same, the...
1 Pages(250 words)Essay

...﻿Disorders of Motility Abstract Motility refers to the contraction of muscles in the mixing and propelling of substances in the gastrointestinal (GI) tract which is responsible for the digestion system. It is divided into four different sections separated by sphincter muscles. The parts differ in their functionality due to their difference in motility patterns (contractions). They include oesophagus, stomach, small intestine and colon. The oesophagus is the channel through which food is carried into the stomach where it mixes with the digestive enzymes after which it is broken down. The small intestine is where the absorption of nutrients takes place. In the colon water is reabsorbed and indigestible food substances eliminated... . The...
3 Pages(750 words)Essay
sponsored ads
Save Your Time for More Important Things
Let us write or edit the essay on your topic "Actin-based cell motility: myofibril contraction" with a personal 20% discount.
GRAB THE BEST PAPER

Let us find you another Essay on topic Actin-based cell motility: myofibril contraction for FREE!