Comments (0)
Add to wishlistDelete from wishlist
Cite this document
Summary
Neurocutaneous disorders are diseases that involve nervous system, skin, and retina and other ectodermal tissues. They are congenital. Migration of neural cells to
brain and melanoblasts to the skin from the neural crest occurs between 3 to 6 months of intrauterine life…
Download full paperFile format: .doc, available for editing
HIDE THIS PAPERGRAB THE BEST PAPER98.7% of users find it useful 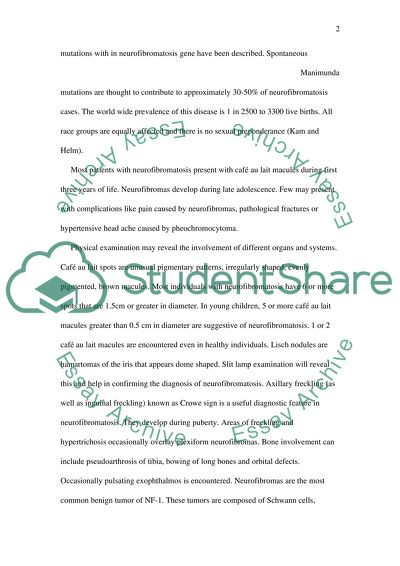 Download file to see previous pages Neurocutaneous disorders are diseases that involve nervous system, skin, and retina and other ectodermal tissues. They are congenital. Migration of neural cells to
brain and melanoblasts to the skin from the neural crest occurs between 3 to 6 months of intrauterine life. A disturbance of this migration results in neurocutaneous syndromes involving ectodermal and neuroectodermal elements (Panda 526). Neurofibromatosis is an autosomal dominant neurogenetic disorder. It can present with spectrum of symptomatology, it affects bone, nervous system, soft tissue and the skin. There are two varieties of neurofibromatosis, NF-1, popularly known as peripheral neurofibromatosis and NF-2, also known as central neurofibromatosis. A third variant is known as segmental neurofibromatosis. However, NF-1 has often central features. Here, the discussion will be limited to NF-1 which can present as plexiform neurofibromatosis.Increased nerve growth stimulating activity is incriminated for the development of neurofibromatosis. The disease has a genetic basis. NF-1 is linked to a large gene on band 17q 11.2. It encodes a protein termed neurofibromin.The protein has been found essential for the negative regulation of Ras, suggesting that neurofibromin acts as a tumor suppressor. Truncations in neurofibromin led to the mutations in most of the
NF-1 cases. NF-1 is a disorder with variable phenotypic expression.
Some patients

may have only cutaneous expression, while others may have life threatening and

disfiguring complications. These variations are demonstrated even with in the

families. The disease also tends to change and develop with time. Many different

mutations with in neurofibromatosis gene have been described. Spontaneous

mutations are thought to contribute to approximately 30-50% of neurofibromatosis

with complications like pain caused by neurofibromas, pathological fractures or

Physical examination may reveal the involvement of different organs and systems.

pigmented, brown macules. Most individuals with neurofibromatosis have 6 or more

spots that are 1.5cm or greater in diameter. In young children, 5 or more caf au lait

macules greater than 0.5 cm in diameter are suggestive of neurofibromatosis. 1 or 2

caf au lait macules are encountered even in healthy individuals. Lisch nodules are

hamartomas of the iris that appears dome shaped. Slit lamp examination will reveal

this and help in confirming the diagnosis of neurofibromatosis. Axillary freckling (as

neurofibromatosis. They develop during puberty. Areas of freckling and

include pseudoarthrosis of tibia, bowing of long bones and orbital defects.

CHECK THESE SAMPLES OF Plexiform neurofibromatosis

...of the diseases. (Gutman, 1997). Neurofibromatosis 1 is characterized by the presence of cafe-au-lait spots, brownish colored patches on the skin. They may also display freckling in the axilla or groin. They develop tumors of the peripheral nerves called neurofibromas, which can arise in the nerve endings in the skin (cutaneous neurofibromas), peripheral nerves (nodular neurofibromas) or optic nerves (optic gliomas). Extensive tumor formation in the peripheral nerves is the most easily identifiable feature of NF1, leading to grotesque disfiguration of the face and limbs, a condition known as plexiform neurofibromatosis. The so-called Elephant Man, Mr. John Merrick is believed to be a...
8 Pages(2000 words)Essay

...people at increased risk of leukemia, including those which also cause Down syndrome. Other disorders which are associated with increased risk of leukemia include Li-Fraumeni syndrome, Klinefelter syndrome, Fanconi’s anemia, neurofibromatosis, and Wiskott-Aldrich syndrome” (Vogt, 2010). Workers who are exposed to certain chemicals during their work hours develop leukemia. One such chemical is Benzene. Also another important risk factor is the medicines which are used for treating other cancer diseases. Smoking cigarettes too is a root cause for developing acute myelogenous leukemia (Risk Factors, n.d.). Older people are at more risk factor of developing leukemia. Adults are mainly at high risk of developing this disease...
5 Pages(1250 words)Term Paper

Human genetic disorders can arise as a consequence of mutations in either nuclear or mitochondrial genomes. Using specific examp

...one of the two parents with the abnormality. These disorders are mainly caused by mutation in one of the genes only with the 50 % possibility of getting the mutated gene. The disease usually develops later in the life or it would even not appear at all as the penetrance of these disorders is considered to be very low and the inheritance is very low too. E.g. Huntingtons disease, Neurofibromatosis 1, Marfan Syndrome Autosomal recessive These disorders usually occur in offsprings who have both the parents affected with the disorder or the disease. As compared to dominant disorders, they require mutation in both the copies of the genes. There is only a chance of 25% transfer of the mutated gene and the development of the...
8 Pages(2000 words)Essay

...as 10 to 25%. Many of these are detected only after death. (5) There is a 15-20% incidence of cholelithiasis (6) Cushing's syndrome is a rare association, usually a consequence of ectopic secretion of ACTH by the pheochromocytoma, or less commonly, by a coexistent medullary carcinoma of the thyroid. It is necessary to remove a pheochromocytoma before a thyroid or parathyroid surgery. Although, current medical knowledge does not associate pheochromocytoma with neurofibromatosis, the following manifestations must be noted in cases of incomplete forms of neurofibromatosis; (1) caf au lait spots (2) vertebral abnormalities, or kyphoscoliosis If the foregoing enumerations are present, especially in...
17 Pages(4250 words)Essay

The Elephant Man Demands of Society in the play

...The person who inspired the play and the film The Elephant Man was a true-to-life curiosity, if not considered as a monstrosity by others, during thelate Victorian age. Joseph Merrick eventually was exhibited as a sideshow until he was rescued by Dr. Frederick Treves. Treves described his patient as "deformed in body, face, head and limbs. His skin, thick and pendulous hung in folds and resembled the hide of an elephant-hence his show name" (Howell & Ford, 1980). Merrick suffered from a rare disease called Neurofibromatosis or Proteus Syndrome. However, the name Elephant Man was mistakenly given as his sobriquet because many thought that he was afflicted with elephantiasis. Born in England in 1862, it became apparent... person who inspired...
7 Pages(1750 words)Essay

...are fibromuscular dysplasia, coarctation of aorta and pheochromocytoma. It has been thought that the elevated blood pressure in these conditions is the cause for the development of aneurysms. Other inherited risk factors which have been incriminated in the development of aneurysms include alpha-glucosidase deficiency, Noonans syndrome, tuberous sclerosis, Klineflters syndrome, alpha-1 antitrypsin deficiency, neurofibromatosis type-1, hereditary hemorrhagic telangiectasia, pseudoxanthoma elasticum and type-IV Ehlers-Danlos syndrome (Vega et al, 2002). Other non-heritable risk factors include female gender, advanced age (beyond 50 years of age), cocaine abuse, head injury, current cigarette smoking, infection of the vessel...
9 Pages(2250 words)Essay

...causes. It has been analyzed that alterations in the normal chromosomal development which may be due translocations as well as rearrangements in the chromosomal structure may lead to leukemia. An interesting aspect of leukemia is that it is seen to be present at a higher rate in the people who suffer from other genetic pathological conditions. A higher incidence of acute leukemia is seen in people who suffer from Bloom Syndrome, Fanconi anemia and ataxia telangiectasia. In a similar manner, increased susceptibility of childhood leukemia is seen in children suffering from Down’s syndrome and neurofibromatosis type I. A virus which is referred to as human T-cell leukemia virus-1 (HLTV-1) has been considered to be a...
7 Pages(1750 words)Research Paper

...individual after the X-chromosomes from one parent units to form a zygote with another parent X-chromosomes (Roy, 2012). However, during X-chromosomes inactivation the A1 sector of genes o the right side fails to express themselves in an individual throughout life allowing the A2 division of genes to express themselves eliciting a particular trait. Experiment 4 The LOD score considered evidence for linkage to the Neurofibromatosis 1 gene The LOD score is equal to logarithm probability of the birth sequence at a given value divided by the likelihood of the birth sequence without linkage in reference to Scott (2012). Therefore, since the combination frequency is equal to 1, the distance (d) would be d=r/N, which is...
5 Pages(1250 words)Essay
sponsored ads
Save Your Time for More Important Things
Let us write or edit the essay on your topic "Plexiform neurofibromatosis" with a personal 20% discount.
GRAB THE BEST PAPER

Let us find you another Essay on topic Plexiform neurofibromatosis for FREE!