Comments (0)
Add to wishlistDelete from wishlist
Cite this document
Summary
The paper "Avian Influenza as an Infection Which is Caused by the H5N1 Virus" describes that infection can range in severity from mild to severe and in recent decades, an increasing incidence of highly pathogenic strains causing severe and sometimes lethal infections in poultry have been found…
Download full paperFile format: .doc, available for editing
HIDE THIS PAPERGRAB THE BEST PAPER94.2% of users find it useful 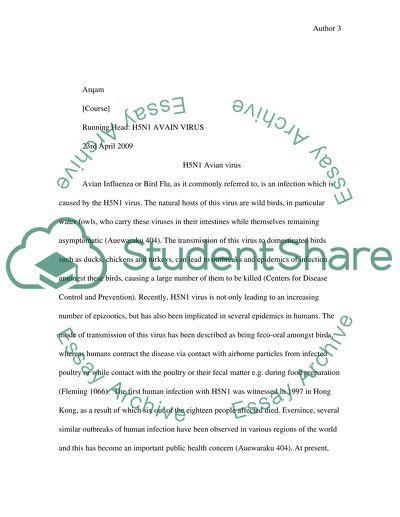 Download file to see previous pages The virus has the ability to undergo antigenic drifts and antigenic shifts. The emergence of new strains of Avian influenza virus is of major public health concern because of the impending threat of a pandemic that it poses. Currently, the virus does not possess the ability to be transmitted amongst humans and it has been postulated that one this quality is acquired it would lead to potentially devastating consequences in the form of a pandemic. Till date, no vaccine for the prevention of H5N1 infection amongst humans exists. Moreover, the treatment options for infection are also limited to viz. oseltamivir and zanamivir. Therefore, further research needs to be undertaken in order to develop new vaccines against these organisms and better medications to combat the infection if once contracted. Moreover, vigilant surveillance of outbreaks and epidemics of bird flu is also imperative.
Avian Influenza or Bird Flu, as it commonly referred to, is an infection which is caused by the H5N1 virus. The natural hosts of this virus are wild birds, in particular waterfowls, who carry these viruses in their intestines while themselves remaining asymptomatic (Auewaraku 404). ...
Recently, the H5N1 virus is not only leading to an increasing number of epizootics but has also been implicated in several epidemics in humans. The mode of transmission of this virus has been described as being feco-oral amongst birds, whereas humans contract the disease via contact with airborne particles from infected poultry or while contact with the poultry or their fecal matter e.g. during food preparation (Fleming 1066). The first human infection with H5N1 was witnessed in 1997 in Hong Kong, as a result of which six out of the eighteen people affected died. Ever since several similar outbreaks of human infection have been observed in various regions of the world and this has become an important public health concern (Auewaraku 404). At present, there are two different clades of the H5N1 which have been identified to be circulating amongst poultry. Amongst these, three subgroups from the clade 2 have been shown to infect humans viz. subclades 2.1, 2.2, and 2.3 Centers for Disease Control and Prevention).
Infections in humans appear on a spectrum, ranging in variety and severity from relatively milder infections such as conjunctivitis to potentially serious ones such as pneumonia and can even lead to death (Centers for Disease Control and Prevention).
The increasing outbreaks of human infection with H5N1 are of prime concern as this organism is highly pathogenic. It has a unique ability to infect humans and this poses a threat to the human race as this virus might have the potential to evolve into a form which is transmissible from person to person (Auewaraku 404). In the past, the world has witnessed several outbreaks of influenza, causing significant morbidity and mortality. ...Download file to see next pagesRead More
Share:
Tags
Cite this document
(H5N1 Avian virus Essay Example | Topics and Well Written Essays - 1750 words, n.d.)
H5N1 Avian virus Essay Example | Topics and Well Written Essays - 1750 words. https://studentshare.org/biology/1505227-h5n1-avian-virus
(H5N1 Avian Virus Essay Example | Topics and Well Written Essays - 1750 Words)
H5N1 Avian Virus Essay Example | Topics and Well Written Essays - 1750 Words. https://studentshare.org/biology/1505227-h5n1-avian-virus.
“H5N1 Avian Virus Essay Example | Topics and Well Written Essays - 1750 Words”. https://studentshare.org/biology/1505227-h5n1-avian-virus.
Comments (0)
Click to create a comment or rate a document

How We Can be Safe from the Bird Flu Virus

Dangerous Virus of the 21st Century

6 Pages(1500 words)Research Paper
sponsored ads
Save Your Time for More Important Things
Let us write or edit the essay on your topic "Avian Influenza as an Infection Which is Caused by the H5N1 Virus" with a personal 20% discount.
GRAB THE BEST PAPER

Let us find you another Essay on topic Avian Influenza as an Infection Which is Caused by the H5N1 Virus for FREE!