Comments (0)
Add to wishlistDelete from wishlist
Cite this document
Summary
The paper "Richard Feynman Point of View of Quantum Mechanics" highlights that the book Six East Pieces by Richard Feynman provides deep analysis on the context of quantum mechanics and begins by expounding the context of atoms. Various illustrations of conservation of energy and gravity are provided…
Download full paperFile format: .doc, available for editing
HIDE THIS PAPERGRAB THE BEST PAPER91.5% of users find it useful 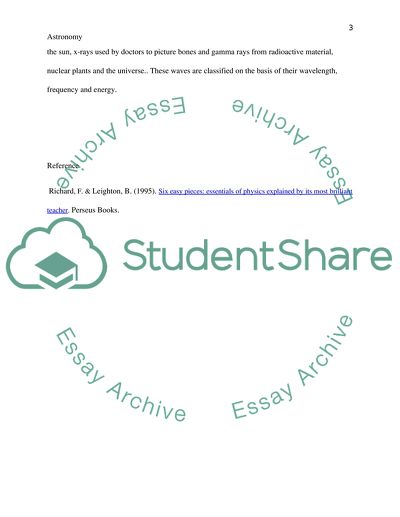 The world view according to Richard Feynman before the development of quantum theory began with the theory of atoms. Most scientists believed that atoms could emit light and release energy but did not how this energy was released and therefore avoided the topic.
Based on the above argument, the theory has changed adversely from molecular to atomic nature, from low to high acceptance, from knowledge to better information on the nature of the atoms. Evolution theory has been known to address the changes in the world-systems over time.
Qn. 2
The electromagnetic spectrum consists of radio waves such as those that radio stations emit into the air to capture tunes, microwaves such as those for cooking popcorn and those used by astronomers to stud galaxies, infrared waves emitted by our skins so as to enable one to be seen in the dark sing night vision kits, visible region that our eyes can see, ultraviolet radiation from the sun, x-rays used by doctors to picture bones and gamma rays from radioactive material, nuclear plants and the universe.. These waves are classified on the basis of their wavelength, frequency and energy. Read More
Share:
Tags
Cite this document
(Astronomy Assignment Example | Topics and Well Written Essays - 250 words - 5, n.d.)
Astronomy Assignment Example | Topics and Well Written Essays - 250 words - 5. Retrieved from https://studentshare.org/astronomy/1617691-astronomy

What Is Quantum Physics

...Quantum mechanics of atoms al Affiliation The Physics greatly inspired me to a greater extent. This is a point whereby various concepts and theories were learnt. These concepts were very interesting because of their flexibility and practical nature [1]. So as much as one can be in a position of learning and grasping a number of topics and conceptual frameworks, a few or even one of them will be in a position of bringing in greater captivation as compared to the rest. For my case, the topic termed as Quantum mechanics of Atoms captivated me to a greater extent. This was on the basis of its conceptual framework as well as the general practical application...
5 Pages(1250 words)Essay
sponsored ads
Save Your Time for More Important Things
Let us write or edit the assignment on your topic "Richard Feynman Point of View of Quantum Mechanics" with a personal 20% discount.
GRAB THE BEST PAPER

Let us find you another Assignment on topic Richard Feynman Point of View of Quantum Mechanics for FREE!