Comments (0)
Add to wishlistDelete from wishlist
Cite this document
Summary
The paper "Contract as Science Fiction Film that Based on Novel by Carl Sagon" states that the film Contact has many theological themes in it. People do not like to meet the aliens as they are fearful. Genes force us to behave in a way that is fit with our survival…
Download full paperFile format: .doc, available for editing
HIDE THIS PAPERGRAB THE BEST PAPER93.8% of users find it useful 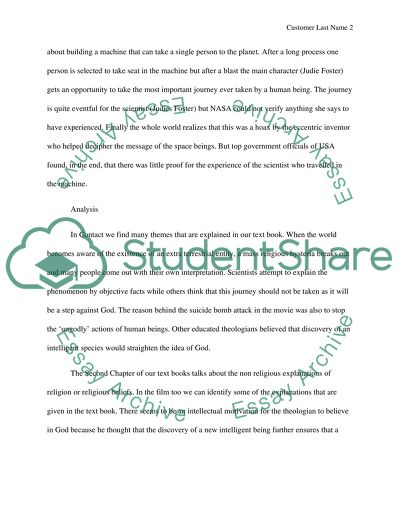 Download file to see previous pages The movie was a blockbuster and is considered one of the best alien movies today. There are many theological themes that can be identified in the movie as the main characters set out to find new specie in-universe. The religious consequences of such a discovery and the doubt of the scientist involved in the expedition make the movie ever so interesting. We will provide a brief summary of the plot and then the film will be analyzed with regards to the themes found in our textbook ‘In the Presence of Mystery’.
Plot
The movie is about a young scientist who is obsessed with finding some kind of extraterrestrial being. She, Judie Foster, eventually become aware of signals that seem to be coming from some non-human living entities residing far in space on a planet called Vega. This discovery shocks the world and everyone is panicked to a certain extent. The message sent by the space being is decoded with the help of a rich billionaire, but eccentric, inventor. The message is about building a machine that can take a single person to the planet. After a long process, one person is selected to take a seat in the machine but after a blast, the main character (Judie Foster) gets an opportunity to take the most important journey ever taken by a human being. The journey is quite eventful for the scientist (Judies Foster) but NASA could not verify anything she says to have experienced. Finally, the whole world realizes that this was a hoax by the eccentric inventor who helped decipher the message of the space beings. But top government officials of USA found, in the end, that there was little proof for the experience of the scientist who traveled in the machine.
Analysis
In Contact, we find many themes that are explained in our textbook. When the world becomes aware of the existence of an extraterrestrial entity, a mass religious hysteria breaks out and many people come out with their own interpretation. Scientists attempt to explain the phenomenon by objective facts while others think that this journey should not be taken as it will be a step against God. The reason behind the suicide bomb attack in the movie was also to stop the ‘ungodly’ actions of human beings. Other educated theologians believed that the discovery of an intelligent species would straighten the idea of God.
The Second Chapter of our textbooks talks about the non-religious explanations of religion or religious beliefs. In the film too we can identify some of the explanations that are given in the textbook. There seems to be an intellectual motivation for the theologian to believe in God because he thought that the discovery of a new intelligent being further ensures that a God exists. He was actually trying to explain and identify the cause of the new being and in turn satisfying his intellectual thirst for the inquisition.
Many people do the same when encountering complex phenomena that cannot have a rational justification. In the case of the movie Contact there was no rational explanation of how the intelligent specie came into existence and how did it acquire intelligence superior to human beings. When there seems no explanation then people associate it with supernatural beings, and this is what the theologian in the movie is doing. He is rationalizing the cause of the existence of the nonhuman living species. ...Download file to see next pagesRead More
Share:
Tags
Cite this document
(“Movie Reflection Paper - Contact Review Example | Topics and Well Written Essays - 1000 words”, n.d.)
Retrieved de https://studentshare.org/visual-arts-film-studies/1439126-movie-reflection-paper
(Movie Reflection Paper - Contact Review Example | Topics and Well Written Essays - 1000 Words)
https://studentshare.org/visual-arts-film-studies/1439126-movie-reflection-paper.
“Movie Reflection Paper - Contact Review Example | Topics and Well Written Essays - 1000 Words”, n.d. https://studentshare.org/visual-arts-film-studies/1439126-movie-reflection-paper.
Comments (0)
Click to create a comment or rate a document

Critical Reflection on the Use and Understanding of SEN Data

15 Pages(3750 words)Term Paper
sponsored ads
Save Your Time for More Important Things
Let us write or edit the movie review on your topic "Contract as Science Fiction Film that Based on Novel by Carl Sagon" with a personal 20% discount.
GRAB THE BEST PAPER

Let us find you another Movie Review on topic Contract as Science Fiction Film that Based on Novel by Carl Sagon for FREE!