Comments (0)
Add to wishlistDelete from wishlist
Cite this document
Summary
Film Response: West Side Story vs. Zoot Suit, A Comparison-Contrast.
West Side Story is a 1960’s adaptation of Shakespeare’s Romeo and Juliet. The film is set in New York City and centers around a feud over turf between two gangs; the Sharks and the Jets…
Download full paperFile format: .doc, available for editing
HIDE THIS PAPERGRAB THE BEST PAPER91.4% of users find it useful 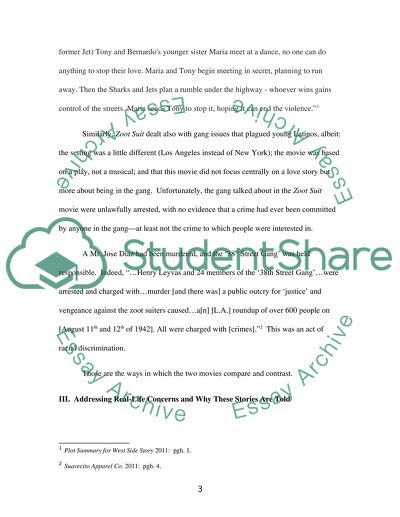 Extract of sample "Film Response: West Side Story vs. Zoot Suit, A Comparison-Contrast"

Download file to see previous pages In Zoot Suit, Luis Valdez takes us on a journey into the pachuco gang lifestyle that was popular in the barrios of Los Angeles in the 1940s. The film is based on real-life events in which Latinos were persecuted (Zoot Suit Riots and the Sleepy Lagoon murder trial). Thematically, both films explore urban and gang life, racial tensions, family ties, and gender roles. In this paper, the two films: will be compared and explored (as well as what are their similarities and differences); will be analyzed to determine to what extent the directors were successful in addressing real life concerns in telling their stories and why these stories are told; will be analyzed as to how the characters are portrayed (are they real men and women, stereotypes, or mythical figures?); and will be analyzed in terms of the ways how filmmakers employ theatrical and cinematic devices as well as the utilization of dance, music, incorporation of myth, and realism to help tell their stories.
Comparison of West Side Story and Zoot Suit (Similarities and Differences)
West Side Story was primarily based off the hit Broadway musical. The gist of the story is that two people—Tony and Maria—are from two different cultures, Polish and Spanish. Tony used to be a part of the gang the Jets, but isn’t anymore. However, they find love even in the midst of the gang rivalry. “[W]hen Riff's best friend (and former Jet) Tony and Bernardo's younger sister Maria meet at a dance, no one can do anything to stop their love. Maria and Tony begin meeting in secret, planning to run away. Then the Sharks and Jets plan a rumble under the highway - whoever wins gains control of the streets. Maria sends Tony to stop it, hoping it can end the violence.”1 Similarly, Zoot Suit dealt also with gang issues that plagued young Latinos, albeit: the setting was a little different (Los Angeles instead of New York); the movie was based on a play, not a musical; and that this movie did not focus centrally on a love story but more about being in the gang. Unfortunately, the gang talked about in the Zoot Suit movie were unlawfully arrested, with no evidence that a crime had ever been committed by anyone in the gang—at least not the crime to which people were interested in. A Mr. Jose Diaz had been murdered, and the ‘38th Street Gang’ was held responsible. Indeed, “…Henry Leyvas and 24 members of the ‘38th Street Gang’…were arrested and charged with…murder [and there was] a public outcry for ‘justice’ and vengeance against the zoot suiters caused…a[n] [L.A.] roundup of over 600 people on [August 11th and 12th of 1942]. All were charged with [crimes].”2 This was an act of racial discrimination. Those are the ways in which the two movies compare and contrast. III. Addressing Real-Life Concerns and Why These Stories Are Told Why these movies were made was to shed light upon discriminatory practices against Latinos. “Latino directors who made breakthroughs in the early 1980s included Luis Valdez, whose [movie] Zoot Suit (1981)…offered an unsparing look at urban gangs, utilizing turf wars to explore issues of local and national belonging.”3 The real-life concerns portrayed in both of these movies mainly included discrimination faced every day by Latinos—who are looked upon with mistrust in West Side Story. It is obvious that the gang which set off the Zoot Suit Riots definitely were discriminated against by the L.A. cops and for being charged with a murder that they most certainly probably didn’t even commit. The reason these types of stories are told are to show people how discrimination against Latinos does in fact exist and that it is not acceptable behavior. Just like the way African-Americans were discriminate ...Download file to see next pagesRead More
Share:
Tags
Cite this document
(“Film Response: West Side Story vs. Zoot Suit, A Comparison-Contrast Essay”, n.d.)
Retrieved de https://studentshare.org/visual-arts-film-studies/1434583-please-see-order-insructionfilm-response

CHECK THESE SAMPLES OF Film Response: West Side Story vs. Zoot Suit, A Comparison-Contrast

The economy of the West grew because of many factors. Sugar, slave trade, and silver played an important role in economic development as we...
7 Pages(1750 words)Essay

It wasn’t until the establishment of The Juvenile Justice Courts were children offici...
6 Pages(1500 words)Research Proposal
sponsored ads
Save Your Time for More Important Things
Let us write or edit the essay on your topic "Film Response: West Side Story vs. Zoot Suit, A Comparison-Contrast" with a personal 20% discount.
GRAB THE BEST PAPER

Let us find you another Essay on topic Film Response: West Side Story vs. Zoot Suit, A Comparison-Contrast for FREE!