Comments (0)
Add to wishlistDelete from wishlist
Cite this document
Summary
“New York Stories”, released in 1989 and came under the genre of comedy, drama and romance. It is actually a series of three stories taking place in the city of New York. The first story, “Life Lessons” is directed by Martin Scorsese and written by Richard Price…
Download full paperFile format: .doc, available for editing
HIDE THIS PAPERGRAB THE BEST PAPER96.7% of users find it useful 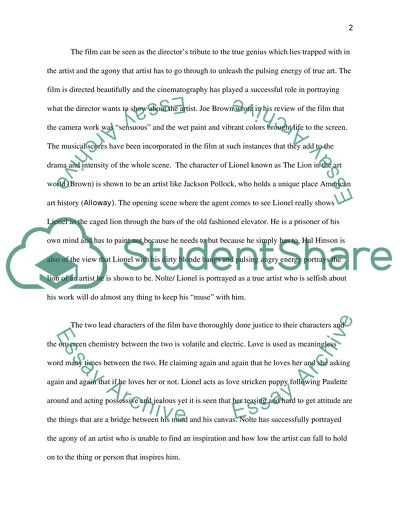 Extract of sample "Of Life Lessons from the New York Stories"

Download file to see previous pages The plot of “Life Lessons” looks simple but is emotionally intense and captures the psychological turmoil of an abstract artist in the wild city of New York. The opening scene of the film shows Lionel struggling to work for an upcoming exhibition and his dealer fears that he will not be able to produce the numbers of canvases he is required to produce. The reason is later found out to be the absence of his assistance cum apprentice Paulette who has almost taken the shape of his personal muse. They both are shown to be in a troubled and complex relationship and apparently Paulette has left Lionel for a young comedian, who dumps her in one day. Lionel is ready to take her back at any cost and when he sees that she is not ready takes her back to his studio saying that it will only be a work relationship.
Throughout the film it is seen that Lionel feeds on the sexual tension between him and Paulette and in his fits of passion, desire and anger is able to produce excellent work. The story ends on Lionel completing his master piece, Paulette leaving him and a Lionel meeting a young female artist, who he immediately offers the position of an assistant.
The film can be seen as the director’s tribute to the true genius which lies trapped with in the artist and the agony that artist has to go through to unleash the pulsing energy of true art. The film is directed beautifully and the cinematography has played a successful role in portraying what the director wants to show about the artist. Joe Brown wrote in his review of the film that the camera work was “sensuous” and the wet paint and vibrant colors brought life to the screen. The musical scores have been incorporated in the film at such instances that they add to the drama and intensity of the whole scene. The character of Lionel known as The Lion in the art world (Brown) is shown to be an artist like Jackson Pollock, who holds a unique place American art history (Alloway). The opening scene where the agent comes to see Lionel really shows Lionel as the caged lion through the bars of the old fashioned elevator. He is a prisoner of his own mind and has to paint not because he needs to but because he simply has to. Hal Hinson is also of the view that Lionel with his dirty blonde bangs and pulsing angry energy portrays the lion of an artist he is shown to be. Nolte/ Lionel is portrayed as a true artist who is selfish about his work will do almost any thing to keep his “muse” with him. The two lead characters of the film have thoroughly done justice to their characters and the onscreen chemistry between the two is volatile and electric. Love is used as meaningless word many times between the two. He claiming again and again that he loves her and she asking again and again that if he loves her or not. Lionel acts as love stricken puppy following Paulette around and acting possessive and jealous yet it is seen that her teasing and hard to get attitude are the things that are a bridge between his mind and his canvas. Nolte has successfully portrayed the agony of an artist who is unable to find an inspiration and how low the artist can fall to hold on to the thing or person that inspires him. The women in the film play a more physical role. The camera captures the contours of their ankle, neck, fingers all of which are adorned ...Download file to see next pagesRead More
Share:
Tags
Cite this document
(“Review of Life Lessons from the Movie New York Stories”, n.d.)
Retrieved from https://studentshare.org/visual-arts-film-studies/1423645-a-review-of-life-lessons-from-the-movie-new-york

... of these poor masses. This is a poignant example also of what Grete had undergone when she first cared for Gregor after his transformation but got tired of the task and eventually abandoned him to his fate. When viewed within the context and polity of the Industrial Revolution, the story very much reflects the conflicts going on in so many spheres of everyday life. The new production processes had resulted in people becoming alienated from each other and the work performed in what Karl Marx collectively termed as alienation, species being and reification. He even explained further by giving four types of alienation brought about the new industrial modes of production (Marx, Mandel & Fernback, 87). Although it is now largely discredited...
8 Pages(2000 words)Term Paper

In order to compare the welfare system of the three proposed countries, it is important to first develop a comparative method that would guide in comparing the three states. For the purpose of this paper, a binary comparison would be conducted. The implicit comparison would deal with Britain while the explicit comparison would explore the USA and Canada. Thereby a small N’ study would be used, that is, of three countries.
The three countries selected to share a similarity in the form that these countries are a welfare state. This is when welfare is mainly funded by the state. While the USA and Canada focus on the liberal welfare state, the welfare state of the UK is not quite defined.
The comparison of the welfare...
8 Pages(2000 words)Term Paper
sponsored ads
Save Your Time for More Important Things
Let us write or edit the movie review on your topic "Review of Life Lessons from the Movie New York Stories" with a personal 20% discount.
GRAB THE BEST PAPER

Let us find you another Movie Review on topic Review of Life Lessons from the Movie New York Stories for FREE!