Comments (0)
Add to wishlist Delete from wishlist
Cite this document
Summary
When Alice Walker was a little girl in a small town call Eatonton, Georgia, when her life changed before her very eyes. While playing with her brother, Walker was accidentally shot her in the eye with a BB gun by him. With her parents being so poor that they didn't take her to the hospital immediately…
Download full paper File format: .doc, available for editing
HIDE THIS PAPERGRAB THE BEST PAPER94.2% of users find it useful 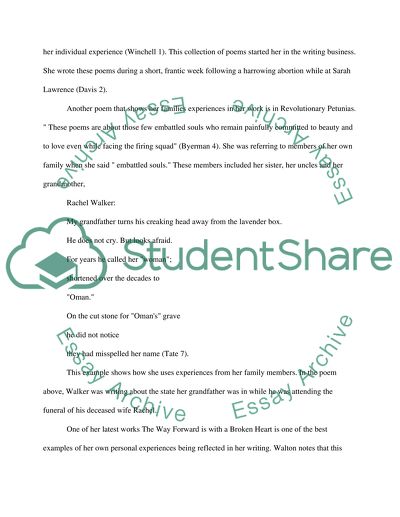 Download file to see previous pages Walker is known for works like, Once: Poems, "Goodnight, Willie Lee, I'll See You in the Morning"; "You Can't Keep a Good Woman Down", and The Color Purple. Although these works are all different forms such as short stories, novels and poems, they all have one thing in common: her personal experiences or someone close to her.
Walker's style of writing reflects events that happened in her own personal life, as well as in the lives of family members. These experiences are shown in works such as The Color Purple and The Way Forward Is With A Broken Heart.
Walker reflects her own personal events throughout her work in many ways; for instance her first book of poetry, Once. She put these poems together acknowledging the hurt of an early pregnancy and abortion, which she considered a social experience shared by others that transcended her individual experience (Winchell 1). This collection of poems started her in the writing business. She wrote these poems during a short, frantic week following a harrowing abortion while at Sarah Lawrence (Davis 2).
Another poem that shows her families experiences in her work is in Revolutionary Petunias. " These poems are about those few embattled souls who remain painfully committed to beauty and to love even while facing the firing squad" (Byerman 4). She was referring to members of her own family when she said " embattled souls." These members included her sister, her uncles and her grandmother,
Rachel Walker:
My grandfather turns his creaking head away from the lavender box.
He does not cry. But looks afraid.
For years he called her "woman";
shortened over the decades to
"Oman."
On the cut stone for "Oman's" grave
he did not notice
they had misspelled her name (Tate 7).
This example shows how she uses experiences from her family members. In the poem above, Walker was writing about the state her grandfather was in while he was attending the funeral of his deceased wife Rachel.
One of her latest works The Way Forward is with a Broken Heart is one of the best examples of her own personal experiences being reflected in her writing. Walton notes that this collection of stories begins as a love letter to her former husband, with whom she raised a daughter, but divorced after ten years together. "She details how the once-vibrant relationship deteriorated into a fragile marriage, damaged by the racial tensions of the time and the slow death of communication." (Howard 8) This is exactly what happened to her relationship with her former husband, who was a white, Jewish civil- rights attorney. So this ties right in with her collection The Way Forward is with a Broken Heart. Walker takes the reader into her personal life filled with things from love to relationships.
Writers from near and far have all agreed that Alice's work is very personal. Robert Allen, staff writer for The Dallas Morning News wrote that Alice Walker's books are intense and very personal. Author Molly Hite, wrote that when Ms. Walker was involved in the Civil Rights movement that she wrote about the Movement in some of her early poetry and short stories. It was Meridian though that she really put her experiences from the Movement in. According to Hite, Walker used her experiences in the Movement and the experience of others of her generation to deal with the social, political, and philosophical issues raised by the Movement.
Walker's work would ...Download file to see next pages Read More
Share:
Tags
Cite this document
(“Living as a Woman of Color in America by Alice Walker Book Report/Review”, n.d.)
Living as a Woman of Color in America by Alice Walker Book Report/Review. Retrieved from https://studentshare.org/people/1529036-living-as-a-woman-of-color-in-america-by-alice-walker

“Living As a Woman of Color in America by Alice Walker Book Report/Review”, n.d. https://studentshare.org/people/1529036-living-as-a-woman-of-color-in-america-by-alice-walker.
Comments (0)
Click to create a comment or rate a document

William Walker as the American Filibuster

William Walker is regarded as an icon of US imperialism in Central America. Born in Nashville, Tennessee, Walker attempted to conquer Mexican territory on an expedition in 1853. In 1854, he declared Lower California and Sonora from Mexico as an independent republic nation. Subsequently, he attacked Nicaragua, established his own government there, and declared himself the president of Nicaragua; and the US formally recognized his government (Walker, William (1824 - 1860).In The Hutchinson Unabridged Encyclopedia including Atlas 2005).
Despite recognizing Walker’s government, the United States did not support it economically or politically. The other Central American countries formed a coalition to fight against Walker an...
11 Pages (2750 words) Case Study

The first aspect that we are going to discuss is undeserved impoverishment and enrichment. Ten of the U.S. presidents enslaved black people at some point in their lives. American history is full of politicians including George Washington who enslaved African Americans (Feagin 14). These tyrants viewed the black Americans as weak, inferior and collapsed and believed that only blacks deserved to be enslaved. Therefore it would not be false if we say that American slavery was racial. The blacks had no freedom at all in that society and were treated worse than horses. If a black American ran from the master, the other people would bring him back to the master and the master would punish the slave and brutalize him. The women slaves we...
10 Pages (2500 words) Assignment

It also has a display of properties typified through the organisms like the reaction of its environment as well as directing the various efforts for self-replication. Like bacteria, viruses are rather microscopic and induce human diseases. However, unlike bacteria, the nature of viruses is of acellular in particles (which means that they do not comprise of living cells such as plants and animals). Instead, they consist of central cores of RNA or DNA coupled in protein coatings (Marshall Cavendish Corporation. 2007).
The viruses do not have properties for living things as they do not have any energy for metabolism hence do not grow in a bid to eradicate the production of waste products. They have no response to any form of sti...
6 Pages (1500 words) Article

Smoking is associated to harm secondary smokers than real smokers and this is the reason many nations including America have implemented bans on smoking as a move to protect non-smokers from the associated harms from smokers and also reduce the prevalence of smoking (John, pg35). This has greatly contributed to controlling public smoking. The smoking prevalence decreased to 18.9% up from 24.4% in adults with the age of 18-24 from the year 2005 to the year 2011, in accordance with a research Centre (CDC). The age group is now among the ones with the lowest prevalence in smoking of age below 65. It was six years back; the group was highest in the smoking number. In America, apart from burning smoking in some public places, the moves...
6 Pages (1500 words) Case Study
sponsored ads
Save Your Time for More Important Things
Let us write or edit the book report/review on your topic "Living as a Woman of Color in America by Alice Walker" with a personal 20% discount.
GRAB THE BEST PAPER

Let us find you another Book Report/Review on topic Living as a Woman of Color in America by Alice Walker for FREE!