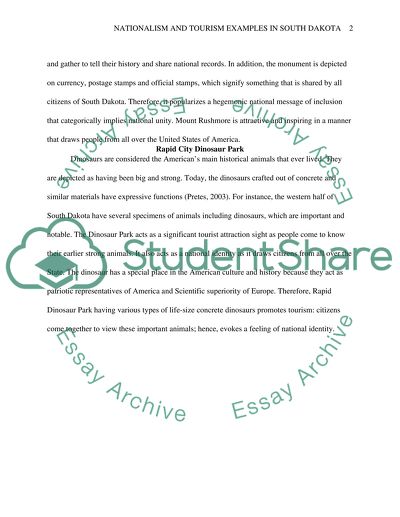 Extract of sample "Nationalism and tourism examples in South Dakota"

Nationalism and Tourism Examples in South Dakota Nationalism and Tourism Examples in South Dakota A heritage sight is a significant aspect of the formation and maintenance of national identity. The three key tourism examples from the American State of South Dakota include Mount Rushmore National Memorial, Rapid City Dinosaur Park and Wall Drug Store. They provide a foundational history and archeology upon which its national identity is built as they create an ‘imagined community’ among a diverse population.
Mount Rushmore National Memorial
It is a political and the single largest attraction in the State of South Dakota. It is a monumental sculpture of American presidents: Thomas Jefferson, Abraham Lincoln, George Washington and Theodore Roosevelt (Pretes, 2003). They are symbols of national unity; hence, instill a feeling of the State’s identity among the citizens. Besides, the monument attracts both domestic and international tourists; hence, depicting a sense of national identity as citizens come and gather to tell their history and share national records. In addition, the monument is depicted on currency, postage stamps and official stamps, which signify something that is shared by all citizens of South Dakota. Therefore, it popularizes a hegemonic national message of inclusion that categorically implies national unity. Mount Rushmore is attractive and inspiring in a manner that draws people from all over the United States of America.
Rapid City Dinosaur Park
Dinosaurs are considered the American’s main historical animals that ever lived. They are depicted as having been big and strong. Today, the dinosaurs crafted out of concrete and similar materials have expressive functions (Pretes, 2003). For instance, the western half of South Dakota have several specimens of animals including dinosaurs, which are important and notable. The Dinosaur Park acts as a significant tourist attraction sight as people come to know their earlier strong animals. It also acts as a national identity as it draws citizens from all over the State. The dinosaur has a special place in the American culture and history because they act as patriotic representatives of America and Scientific superiority of Europe. Therefore, Rapid Dinosaur Park having various types of life-size concrete dinosaurs promotes tourism: citizens come together to view these important animals; hence, evokes a feeling of national identity.
References
Pretes, M. (2003). Tourism and nationalism: Annals of tourism research. Australian National Unity, Australia 30(1), 125-142. Read More
Share:
Tags
Cite this document
(“Nationalism and tourism examples in South Dakota Coursework”, n.d.)
Retrieved from https://studentshare.org/tourism/1699380-nationalism-and-tourism-examples-in-south-dakota

“Nationalism and Tourism Examples in South Dakota Coursework”, n.d. https://studentshare.org/tourism/1699380-nationalism-and-tourism-examples-in-south-dakota.
Comments (0)
Click to create a comment or rate a document

CHECK THESE SAMPLES OF Nationalism and tourism examples in South Dakota

The smoking in ban south dakota

... Smoking ban in South Dakota Smoking is a controversial not only in America, but also in all over the world. It is an accepted fact that smoking creates problems to the smoker and the innocent people around him. In fact secondary smoke is more harmful than primary smoke. “The Environmental Protection Agency has classified secondhand smoke as a Group A carcinogen, a substance known to cause cancer in humans. The EPA does not recognize a safe level of exposure to Group A carcinogens” (Campus Policies). In fact a substantial number of people in the world are facing immense health problems because of smoking habits. Cancer, heart diseases, cough, fever, head ache etc are some of the major health problems associated with smoking. Recently...
5 Pages (1250 words) Essay

... from 13 to 24 thousand while the international tourists account for 8 to 16 thousand people on an annual basis. These target groups accounting for making wildlife tourism in South Africa render around 1025 to 1975 billion rand to the nation’s Gross Domestic Product on an annual basis (Research and Analysis Report, 2010, p.9). The report therefore intends to provide a clear-cut plan to attract these tourists by strategies in marketing and promotion and therefore add to the economy in terms of revenues as well. WILDLIFE TOURISM IN SOUTH AFRICA – A Marketing Plan Marketing Plan for Promoting Wildlife Tourism in South Africa South Africa is home to a large amount of biodiversity spread along its natural parks and wildlife habitats and accounts...
12 Pages (3000 words) Essay

... Nationalism: a force to be reckoned with during periods of strife During periods of conflict many government leaders rely on how citizens feel about their country to recruit soldiers as well as to gain support for the continuation of a fighting strength. When governments fall out of favor with the nations people, many issues can arise which can lead to increased discord and an overall lack of support for continued conflict. Nationalism can mean many things, but when it comes to times of conflict, nationalism is overall a unifying force that brings together individuals of different backgrounds and schools of thoughts to become a stronger, unified force. Examples of instances that nationalism assisted during conflict are the following four...
5 Pages (1250 words) Essay

... Sex Trafficking in South Dakota Introduction Sex trafficking contributes to the cycle of violence against women and inflicts global social and health consequences to the affected victims. Trafficking involves the smuggling of humans for sexual purposes leading to sexual exploitation perpetuated by the people driven by selfish motives. Globalization has been blamed for this commodification of human’s beings due to weak societal cultures which results due to modernization. Economic problems coupled with lack of political will to eliminate human trafficking is the reason behind continuous increase in sex trafficking. Sex trafficking is a global problem but it is more prevalent in some areas like South Dakota. The Law in South Dakota South...
3 Pages (750 words) Research Paper

...How meaningful is it to distinguish between different kinds of nationalism Introduction Nationalism has been a contentious issue over time as analysts cannot agree on its definition and its role in society. Most analysts, however, contend that nationalism is a specifically modern phenomenon, which became salient in the eighteenth1 or nineteenth century.2 Ernest Gellner3 was able to convincingly demonstrate that nationalism marked a profound break in human history instead of corresponding to a universal and ancient human need. He stated that the industrial revolution in the West necessitated a radical change in the relationship between polity and culture, and that this in turn produced nationalism. Mass literacy and a high degree of social...
6 Pages (1500 words) Essay

... example of the how regional manifestations of climate change are becoming highly relevant for tourism destinations and tourists alike whereas allegedly the needful response has been said to be missing from the tourism managers of the region (Amelung et al 2008). This is largely a misconception as the most of the action in South West has been through the NGO's and the private sector which may have received little popularity due to the lack of funding and media coverage but it has laid a firm basis for political action. (Amelung et al 2008;Fankhauser, S. 2005:Hope, C. W. 2006) Popular South West tourist destinations have included the likes of Cornwall, Devon, Somerset, Dorset, and Gloucestershire (Cotswolds and the Forest of Dean...
4 Pages (1000 words) Case Study

The Dutch East India Company was the pioneer European settler on Cape of Good Hope. They established permanent colony comprising of 15000 setters. The number rose to above 15000 by the end of 18th century. The other settlers or area came in 1795 and tried to make an independent republic. These were known as Boers of Afrikaners (Binns & Nel 236).
In 1815, Britain was able to control the cape colony and brought 5000 settlers at the end of Napoleonic Wars. That was the era when African blacks were being released from slavery and they were moving back to Africa. This was known as “Great Trek” when Africans were settling North and East into African tribal territory. They also explored the areas of Orange Free Stat...
7 Pages (1750 words) Essay

.... As a result, people were able to talk with one voice and establish a nation based on their ideas, values, languages, and customs. For example, in this period, Italy was controlled by various nations. Nationalist beliefs led to upset of Italians due to control by various foreign rulers. Hence, there was formation of nationalist group such as Young Italy. The group and others organized revolt in various parts of country under different rulers. The foreign rulers were toppled and driven out of the country. As a result, Italians were able to be united. Moreover, the idea of nationalism in this period led to establishment of independent states. Nationalism led to resentment against foreign rule. At this period, there was dynastic authority...
1 Pages (250 words) Essay

... Tourism Organisation. (in United Nations, 2009). Hotels in Seoul are booked solid and some tourists are diverted to other South Korean destinations. Convention tourism is less costly in South Korea, so costs to organizations meeting in South Korea represents savings. South Korea also is home to many technological and electronic component manufacturers. Many of these companies are partnering with Japanese and other Asian corporations that manufacture larger products. “Hyundai Motor Company, Koreas leading automaker, has long-term strategic ties with Japans Mitsubishi Motor Company. Their association has developed to the point where the two now use interchangeable parts in new models” (Berger, 1992). With new partnerships...
10 Pages (2500 words) Case Study
sponsored ads
Save Your Time for More Important Things
Let us write or edit the coursework on your topic "Nationalism and tourism examples in South Dakota" with a personal 20% discount.
GRAB THE BEST PAPER

Let us find you another Coursework on topic Nationalism and tourism examples in South Dakota for FREE!