Comments (0)
Add to wishlistDelete from wishlist
Cite this document
Summary
From unique cultural diversity that includes the famous Handa Opera on Sydney harbor to natural attractive sites such as The…
Download full paperFile format: .doc, available for editing
HIDE THIS PAPERGRAB THE BEST PAPER97.9% of users find it useful 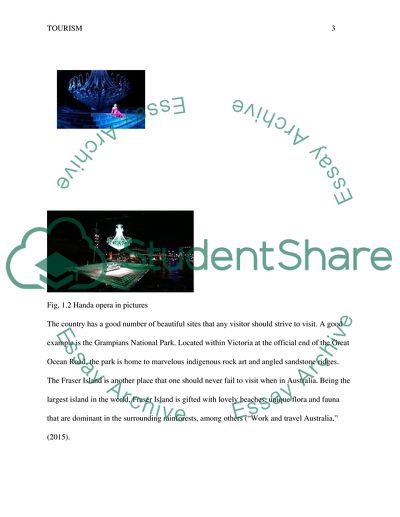 Tourism within Australia Australia is a land richly endowed with a good climate and beautiful sceneries that many tourists, both local and international, do find attractive. From unique cultural diversity that includes the famous Handa Opera on Sydney harbor to natural attractive sites such as The Grampians National Park, Australia has always been a tourist destination for many. This paper explores some of the attractive sites as well as the climate within this region in attempt to explain why it is a place every tourist must visit at some point.
Most of the land within Australia is under desert, however, South East and South West regions of Australia have temperate climate. Due to its location, the country experiences mild winter, making the winter and summer temperatures to be almost the same (Oliver, 2005). This kind of weather is what most people find enjoyable, as the cool ocean breeze that do sweep across the land compliments it. Nevertheless, there are quite a number of beautiful landscapes such as the grassland of Queensland and mountain ranges located near Proserpine.

Fig. 1.1. Queensland grassland
Sydney is also famous for the Handa Opera, a masterful monumental practice held during summer that is unique to this part of the world only. The opera is a combination of various activities that include fine dining and champagne, with a stunning view of sunset from the harbor and lots of entertainment under the beautiful night sky (“Handa Opera,” 2015). The fete is characterized by a fantastic music projection through concealed speakers with the Australian Opera and Ballet Orchestra sheltered below the stage.


Fig. 1.2 Handa opera in pictures
The country has a good number of beautiful sites that any visitor should strive to visit. A good example is the Grampians National Park. Located within Victoria at the official end of the Great Ocean Road, the park is home to marvelous indigenous rock art and angled sandstone ridges. The Fraser Island is another place that one should never fail to visit when in Australia. Being the largest island in the world, Fraser Island is gifted with lovely beaches, unique flora and fauna that are dominant in the surrounding rainforests, among others (“Work and travel Australia,” (2015).

CHECK THESE SAMPLES OF Australia

...for the purpose of re growth was their common practice. They were a traditional race; caves and rocks were their temporary abode. During the era of pre-European settlement in Australia, according to Crawford (2003 p. 38), they were approximately 500 000 Aboriginals, speaking about 2000-2500 different languages living in groups which had distinct languages and culture, who identified themselves with the language they spoke. When the Indonesians (Macassans) came to the shore of this remote island, the brought with them goods: knives, blades and fishing nets to trade for the local cucumbers and other goods. In this process, the Aboriginal picked up new words from the Indonesians and changes were inflicted on their dialect....
3 Pages(750 words)Essay

.... The ultimate aim of our research is to develop a competitive strategy model, which is done through Porter method. Overview of Business FPV is a force to reckon with, in Australia's segment of high performance cars, with brands such as GT, GT-P, Pursuit, Super Pursuit, F6 Typhoon, F6 Tornado and Force (FPV website, 2006). Its major competitor is Melbourne-based HSV. The current FPV range is a mix of turbocharged inline 6-cylinder and V8-powered Falcons. Each brand has its own conceptual framework and design, and the constant focus of the brand FPV, is to maintain benchmarks set by V8 racing cars. At this point, it is important to lay emphasis on the genetic makeup i.e. the internal structure of the corporate...
14 Pages(3500 words)Essay

...just cannot get enough of the good life. The company could well be on its way to wearing Australia's best employer crown. So what is Cisco all about Cisco, which was founded in 1984 by two computer scientists from Stanford University, began life as a manufacturer of routing systems. Since it sold its first router in 1986, the company has more than lived up to its vision of 'Changing the Way We Live, Work, Play and Learn'. Apart from its core development areas of routing and switching, Cisco has now branched into various technology-related fields like IP communications, wireless LAN, home networking, application networking services, network security, storage area networking and video systems. The company, which has its...
12 Pages(3000 words)Case Study

...meeting a person for the first time, the person is greeted with the right hand and people who are known to each other do not kiss and even hug when meeting; but talk generally about personal matters. Australian day, Anzac Day, Melbourne Cup Day, are some of the days that have national meaning in Australia. There are various ways in which the Australians behave in their day-to-day life as a society. Australia being a multicultural country encourages everyone to maintain and practice his/her cultural beliefs as it respects the rights of other individuals to do the same. Words such as “thank you” and “please” are used to show polite behavior; slang is also common among the Australians. There are no laws to...
1 Pages(250 words)Essay

... History of Australia Just like the United States, the White skinned inhabitants of Australia who are the posted people for who an Australian is are not the original settlers in the land. While the Americans had to deal with the Native Americans when they first landed on Plymouth Rock, Australia was long inhabited by the Aboriginal people for at least 50,000 years. They were thought to have arrived here from the South East Asia during the last ice age. The belief is that the aboriginals numbered at least one million and scatter across 300 clans with at least 250 languages and 700 dialects between them. Due to the relatively dry environment of the country, the aboriginals were forced to become nomadic tribes traveling on a quest of trade...
5 Pages(1250 words)Essay

... in the right country so as to portray the Australians character. In the movie Australia, the cultural landscape portrays very old houses, which have been traditionally built. Most of the houses been build using mud, and this makes the movie look like a traditional movie which was shot long time ago. There is the existence of ranches, which keep large head of cattle implying that the movie must have been shot to represent how the Australians lived a long time ago. The movie takes place in the Australia this is because of the physical appearance of the landscape. Australia is a country, which is known to having a very rugged landscape which is very mountainous. The tribunal Aborigine is a traditional culture which is used in the movie...
2 Pages(500 words)Movie Review

... ‘starting a business’ and “Getting credit” (World Bank). Australia has the world’s 12th largest economy, sustained by a relatively low population of just 23,608,400 people, most of whom are concentrated in a few, highly developed urban centers. Their comparatively geographically isolated location and a small domestic market means that the Australian government is concerned about their future economic growth and local businesses are increasingly looking towards international markets for business prospects (World Business Culture). Australia’s culture has been influenced by their history as a British colony and the lifestyle, language and social ethics of Caucasian migrants who eventually settled in the area. As a group, Australian’s...
2 Pages(500 words)Essay

..., MySuper product will provide an opportunity through which members will increase their investment an aspect that will have a positive impact on the economic growth of the entire country. Similarly, based on the fact that the product acts in a default manner, it provides equity that is vital in closing the disparity between the poor and the rich (Sheffrin, 2003). As a result, the level of poverty is reduced not only at the individual level but nationally. Part B Superannuation system in Australia is one of the economic policies that will have a significant impact on the country. Having been a government supported policy; the arrangement provides minimum provisions for employees. As from 1st July 2014, employers are required to pay 9.5...
4 Pages(1000 words)Essay
sponsored ads
Save Your Time for More Important Things
Let us write or edit the term paper on your topic "Australia" with a personal 20% discount.
GRAB THE BEST PAPER

Let us find you another Term Paper on topic Australia for FREE!