Comments (0)
Add to wishlist Delete from wishlist
Cite this document
Summary
Its morning 22nd February 2013 it’s a drive past the Pepsi centre heading south on chopper cir towards 11th street ,taking the first left and turned left onto Auraria pkwy onto the Market street turning right onto the 14th street . My journey leads me to 13th street. It’s…
Download full paper File format: .doc, available for editing
HIDE THIS PAPERGRAB THE BEST PAPER96.5% of users find it useful 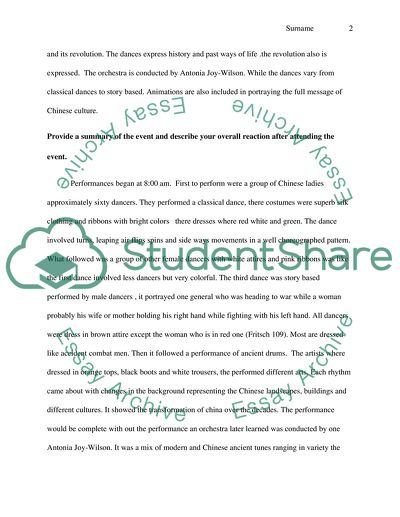 Cultural Event Report Clearly identify the event location, attended, the attendees, and your initial reaction upon arriving at the event.
Its morning 22nd February 2013 it’s a drive past the Pepsi centre heading south on chopper cir towards 11th street ,taking the first left and turned left onto Auraria pkwy onto the Market street turning right onto the 14th street . My journey leads me to 13th street. It’s the shen yun 2013 festivals taking place the Buell theatre. Buell Theater is on the left of the Denver center for performing arts. Its world class facility, the reception was one of a kind. Its 8:00 and we are all seated; it’s a full packed house. At first I thought it could be an event of a few and only Chinese would attend, I was wrong. Buell theatre was full of all sorts of personality where in attendance including Senator Nancy Todd hence government was fully represented. The Shen Yun festival was all about Chinese culture and music. The set up was amazing it was like being on avatar movie (Fritsch 17).
Provide specific information and a description of at least two (2) pieces.
The Shun Yun performances are arts and entertainment based on the 5000 years of Chinese culture it’s a series of events including music and dances about China and the impact and its revolution. The dances express history and past ways of life .the revolution also is expressed. The orchestra is conducted by Antonia Joy-Wilson. While the dances vary from classical dances to story based. Animations are also included in portraying the full message of Chinese culture.
Provide a summary of the event and describe your overall reaction after attending the event.
Performances began at 8:00 am. First to perform were a group of Chinese ladies approximately sixty dancers. They performed a classical dance, there costumes were superb silk clothing and ribbons with bright colors there dresses where red white and green. The dance involved turns, leaping air flips spins and side ways movements in a well choreographed pattern. What followed was a group of other female dancers with white attires and pink ribbons was like the first dance involved less dancers but very colorful. The third dance was story based performed by male dancers , it portrayed one general who was heading to war while a woman probably his wife or mother holding his right hand while fighting with his left hand. All dancers were dress in brown attire except the woman who is in red one (Fritsch 109). Most are dressed like accident combat men. Then it followed a performance of ancient drums. The artists where dressed in orange tops, black boots and white trousers, the performed different arts. Each rhythm came about with changes in the background representing the Chinese landscapes, buildings and different cultures. It showed the transformation of china over the decades. The performance would be complete with out the performance an orchestra later learned was conducted by one Antonia Joy-Wilson. It was a mix of modern and Chinese ancient tunes ranging in variety the performance was out of this world was and full of passion. The speeches and thanks giving by various dignitaries were to mark the end of Shun Yun festival for the day.
After attending the Shun Yun I come into the conclusion that we are a world of diversity in terms of culture, you don’t need to travel the world to experience this but all is found the United States of America. I also come to accept the different culture the world offers.
Works Cited
Fritsch, Juliette. Museum Gallery Interpretation and Material Culture. New York: Routledge, 2012. Read More
Share:
Tags
Cite this document
(“Cultural Event Report Essay Example | Topics and Well Written Essays - 500 words - 28”, n.d.)
Cultural Event Report Essay Example | Topics and Well Written Essays - 500 words - 28. Retrieved from https://studentshare.org/tourism/1619360-cultural-event-report

The Interaction Between an Individual and Society

The level of awareness of the World Trade Organization

The Diamonds by J. Sorie Conteh

... lingers after he had left. Jack Welch is vehemently against breaking up GE and wants its present structure as a conglomerate (Schwartz, NYT, p. 3) which he had termed as virtual surrender of the very values he held dear throughout his stint at G.E. if the company is broken up. During his time with G.E., it had as many as 17 different divisions which got cut down to only six today. But this masks the several hundred businesses under this neat categories, actually a mishmash of different product lines and services. The culture at G.E. today is vastly different than the one under Jack Welch. It could be described as kindler and gentler under Mr. Immelt with his leadership style as more subtle if compared to Jack Welchs often abrasive style...
12 Pages (3000 words) Report
sponsored ads
Save Your Time for More Important Things
Let us write or edit the essay on your topic "Cultural Event Report" with a personal 20% discount.
GRAB THE BEST PAPER