Comments (0)
Add to wishlistDelete from wishlist
Cite this document
Summary
Along bannock street past the golden triangles lays the Denver art museum at the civic center. My visit to the Denver art museum was on the 2nd February…
Download full paperFile format: .doc, available for editing
HIDE THIS PAPERGRAB THE BEST PAPER98.4% of users find it useful 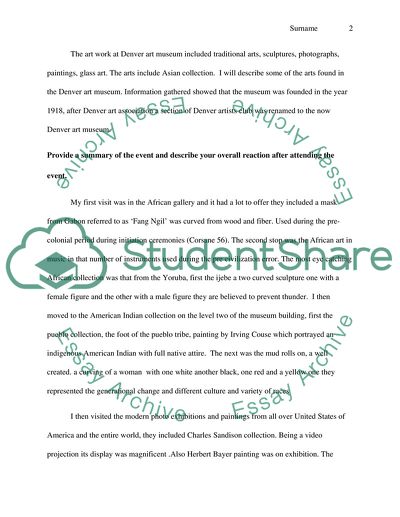 Cultural Event Report Clearly identify the event location, attended, the attendees, and your initial reaction upon arriving at the event.
It a bit to explore the humanities beyond class room, I opted to visit Denver art museum, located in the heart of Colorado. Along bannock street past the golden triangles lays the Denver art museum at the civic center. My visit to the Denver art museum was on the 2nd February 2013, the museum was well located in people attending came from all over the country and beyond. From the people in attendance it could tell how popular Denver art museum was. Curiosity was killing me, expectations where high and was ready to see what Denver art museum was to offer. Being the first Saturday of the month no admission fee was being charged (Corsane 29). The architecture and art involved in the design of the Denver art museum was magnificent. The entrance was enough to judge what was to expect. One by one we found ourselves into the museum with lots to expect from the visit.
Provide specific information and a description of at least two (2) pieces.
The art work at Denver art museum included traditional arts, sculptures, photographs, paintings, glass art. The arts include Asian collection. I will describe some of the arts found in the Denver art museum. Information gathered showed that the museum was founded in the year 1918, after Denver art association a section of Denver artists club was renamed to the now Denver art museum.
Provide a summary of the event and describe your overall reaction after attending the event.
My first visit was in the African gallery and it had a lot to offer they included a mask from Gabon referred to as ‘Fang Ngil’ was curved from wood and fiber. Used during the pre-colonial period during initiation ceremonies (Corsane 56). The second stop was the African art in music in that number of instruments used during the pre civilization error. The most eye catching African collection was that from the Yoruba, first the ijebe a two curved sculpture one with a female figure and the other with a male figure they are believed to prevent thunder. I then moved to the American Indian collection on the level two of the museum building, first the pueblo collection, the foot of the pueblo tribe, painting by Irving Couse which portrayed an indigenous American Indian with full native attire. The next was the mud rolls on, a well created. a curving of a woman with one white another black, one red and a yellow one they represented the generational change and different culture and variety of races
I then visited the modern photo exhibitions and paintings from all over United States of America and the entire world, they included Charles Sandison collection. Being a video projection its display was magnificent .Also Herbert Bayer painting was on exhibition. The painting which was from oil on a canvas was magnificent it was created in 1948. The last exhibition I visited was works by Jeanne Quins was about a corridor exhibition.
My visit to the Denver art museum was an experience of a life time in that I got the chance to experience the outside world. My earlier perspective of the outside world was that they had nothing to offer to the world, but I was proved wrong. The native culture had more to offer with the history and origin of various tribes and cultures exposed. I found the magic of Africa in the heart of Colorado. The state had more to offer than I had over imagined (Corsane 77). The nature in which the whole set up was laid was superb. The whole world both ancient and modern under one roof I loved it. The magic of Colorado in found in Denver art museum.
Works Cited
Corsane, Gerard. Heritage, Museums and Galleries: An Introductory Reader. Chicago: Routledge, 2005. Read More
Share:
Tags
Cite this document
(“Cultural Event Report Essay Example | Topics and Well Written Essays - 500 words - 27”, n.d.)
Cultural Event Report Essay Example | Topics and Well Written Essays - 500 words - 27. Retrieved from https://studentshare.org/tourism/1619358-cultural-event-report

Competiton Between Wawa and Royal Farms

Performance Pressure as a Double-edged Sword: Enhancing Team Motivation but Undermining the Use of Team Knowledge

Make a connection or disconnection between 2 readings. Name the readings and the connection and develop that idea

Impact of Cultural Beliefs and Stigma

Explication of the poem Persimmons by Li-Young Lee

... lingers after he had left. Jack Welch is vehemently against breaking up GE and wants its present structure as a conglomerate (Schwartz, NYT, p. 3) which he had termed as virtual surrender of the very values he held dear throughout his stint at G.E. if the company is broken up. During his time with G.E., it had as many as 17 different divisions which got cut down to only six today. But this masks the several hundred businesses under this neat categories, actually a mishmash of different product lines and services. The culture at G.E. today is vastly different than the one under Jack Welch. It could be described as kindler and gentler under Mr. Immelt with his leadership style as more subtle if compared to Jack Welchs often abrasive style...
12 Pages(3000 words)Report
sponsored ads
Save Your Time for More Important Things
Let us write or edit the essay on your topic "Cultural Event Report" with a personal 20% discount.
GRAB THE BEST PAPER