Comments (0)
Add to wishlistDelete from wishlist
Cite this document
Summary
Tourism is a major industry for many of the countries.Their economies are thriving on it and major share of GDP comes from this industry. Today countries have started to join the rat race to enjoy the benefits that come up with tourism…
Download full paperFile format: .doc, available for editing
HIDE THIS PAPERGRAB THE BEST PAPER91% of users find it useful 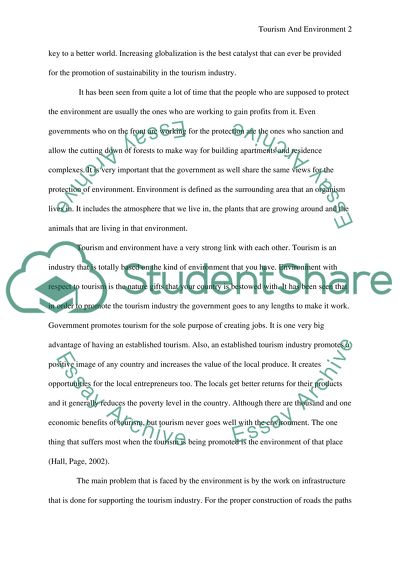 Extract of sample "Tourism and environment"

Download file to see previous pages Every country is trying to increase their own tourism industry to boost their foreign investments and increase their foreign reserves. Although countries trying to promote their tourism industry claim that they are doing it for the betterment of their country they fail to account for the environmental and the social changes that will follow. It has usually been seen that countries fail to account for the environmental changes that come to their country as a tag along gift with all those tourists coming in. The profits although apparently outweigh the cost that come with it, but the major issue is that the cost that is incurred has its effects in the long run. It has been believed that tourism as an industry can be controlled even at the international level. United Nations has formed a committee to foresee that tourism does not have any negative impact on the environment. They organized this “dialogue” so that countries all involved in this industry should come forward and pitch in ways to make tourism a safe industry and to reduce its adverse effects on the environment of the country. The forum includes government; respective ministries, local activist parties and international NGO’s that are working to protect the environment.They believe that sustainability is the key to a better world. Increasing globalization is the best catalyst that can ever be provided for the promotion of sustainability in the tourism industry. It has been seen from quite a lot of time that the people who are supposed to protect the environment are usually the ones who are working to gain profits from it. Even governments who on the front are working for the protection are the ones who sanction and allow the cutting down of forests to make way for building apartments and residence complexes. It is very important that the government as well share the same views for the protection of environment. Environment is defined as the surrounding area that an organism lives in. It includes the atmosphere that we live in, the plants that are growing around and the animals that are living in that environment. Tourism and environment have a very strong link with each other. Tourism is an industry that is totally based on the kind of environment that you have. Environment with respect to tourism is the nature gifts that your country is bestowed with. It has been seen that in order to promote the tourism industry the government goes to any lengths to make it work. Government promotes tourism for the sole purpose of creating jobs. It is one very big advantage of having an established tourism. Also, an established tourism industry promotes a positive image of any country and increases the value of the local produce. It creates opportunities for the local entrepreneurs too. The locals get better returns for their products and it generally reduces the poverty level in the country. Although there are thousand and one economic benefits of tourism, but tourism never goes well with the environment. The one thing that suffers most when the tourism is being promoted is the environment of that place (Hall, Page, 2002). The main problem that is faced by the environment is by the work on infrastructure that is done for supporting the tourism industry. For the proper construction of roads the paths are made, for those trees are cut down. Cutting down of trees results in loss of ...Download file to see next pagesRead More
Share:
Tags
Cite this document
(“Tourism and environment Essay Example | Topics and Well Written Essays - 1500 words”, n.d.)
Retrieved from https://studentshare.org/tourism/1445999-tourism-and-environment
(Tourism and Environment Essay Example | Topics and Well Written Essays - 1500 Words)
https://studentshare.org/tourism/1445999-tourism-and-environment.
“Tourism and Environment Essay Example | Topics and Well Written Essays - 1500 Words”, n.d. https://studentshare.org/tourism/1445999-tourism-and-environment.
Comments (0)
Click to create a comment or rate a document

CHECK THESE SAMPLES OF Tourism and environment

Responses to the global environmental challenges have become one of the heated debatable matters around the world, as a number of organizations, researchers, and nations are endeavoring to sustain the continuity of the global environment, where is harmed by different natural and manmade causes. In order to come up with an effective solution, it is very important to understand and go into the core of the global problem. In th...
7 Pages(1750 words)Coursework

An ethical scenario arose during my first six months in this management role involving a 21-year-old employee who I witnessed smoking pot in the parking lot over lunch break. This scenario demanded that I consider the needs of the employee, as well as satisfying my obligations for enforcing the strict drug use policy administered at the senior levels of the company. This project describes the ethical scenario in detail, offering personal reflections on the incident as well as suggesting an ethical framework for handling situations like this in the future.
The situation which occurred had a young worker smoking pot on his lunch break on the company grounds. This, according to policy, is a termination offense and it is expected...
7 Pages(1750 words)Case Study
sponsored ads
Save Your Time for More Important Things
Let us write or edit the essay on your topic "Tourism and environment" with a personal 20% discount.
GRAB THE BEST PAPER

Let us find you another Essay on topic Tourism and environment for FREE!