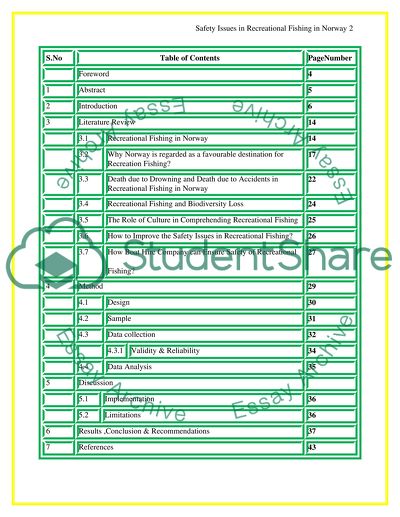 Download file to see previous pages Norway is a very popular destination for recreational fishing due to its preserved natural world, long coastline with wide seabed and fjords. Presently, fish is the third most important export product for Norway after oil/gas and metal, and accounts for 5.7 % of the aggregate of Norwegian export value. (“Fishing and fish farming,” 2009)
Lofoten, located in northern Norway, is regarded as the birthplace of tourist fishing, and dates back to 1960’s(confirm!); the old, unused cabins were used to accommodate the guests, and as the amount of guests rose, new cabins were built to meet this demand. (Williams et al., 2011) It is important to mention at this point that, until the 90’s, there was no organized fishing tourism. The growth in organized fishing tourism was partly the result of a special marketing campaign led by Innovation Norway from the mid 90’s. (“Borch et al., 2011”)
Norway has a very liberal approach to tourist fishers and applies no quotas, taxes or specific regulations on recreational tourist fishers in the sea, except basic rules regarding the tools that they are allowed to use and also regarding selling fish, which is not allowed for tourist fishermen. (“Williams et al., 2011”) The only rules applied to tourist fishers except these, are the general rules, such as safety at sea regulations etc. More on these rules and regulations regarding tourist fishermen and its contrast between commercial fishermen will be talked upon later on. Norway’s approach to fishing in general is that the fish in the sea belongs to the Norwegian society as a whole. This approach was legislated by The Marine Resource Act that was implemented in 2008(!), this purpose of this ...Download file to see next pagesRead More
Share:
Tags
Cite this document
(“Safety issues regarding foreign recreational fisherman in Norway Dissertation”, n.d.)
Safety issues regarding foreign recreational fisherman in Norway Dissertation. Retrieved from https://studentshare.org/tourism/1399452-safety-issues-regarding-foreign-recreational

However, political instability and turmoil are yet a few of the hindrances which could affect the stock markets and in a worst-case scenario may as well, completely shut down businesses (Root 1982). The new business practices, on the other hand, involve a transparent setup and a free market, free of turmoil to operate and maximize production (Bennett 1998). Also, in such a case, the consumer must also be able to spend on the product, to make it a success. However, Burma currently has strong institutions having a hold on the resources which need to be exploited, i.e. a few of the military generals and autocrats have access to the resources, and thus, dealing with these groups might prove to be a waste of the corporation`s own effor...
6 Pages(1500 words)Assignment

The use of the narrator in the novel helps illustrate sensual, erotic, and heartbreaking moments. To achieve its goal of exploring the acknowledged subject of love, betrayal, beauty, and desire, the author approaches the issues with an overwhelming zeal. Hence, the aim of the study is to evaluate the various techniques used in the two narratives in communicating their notions of the various subjects within the novels.
Acker uses language from other writers; as well, the plot in her fiction employs appropriation, which in return propels appropriation to the extreme since a huge part of her writing integrates texts of fiction from past writers. Blood and Guts in High school deal with the journey of a young lady through a dark w...
8 Pages(2000 words)Literature review
sponsored ads
Save Your Time for More Important Things
Let us write or edit the dissertation on your topic "Safety issues regarding foreign recreational fisherman in Norway" with a personal 20% discount.
GRAB THE BEST PAPER

Let us find you another Dissertation on topic Safety issues regarding foreign recreational fisherman in Norway for FREE!