From the Golden Age to Cyberpunk - Literature review Example

Comments (0)
Add to wishlistDelete from wishlist
Cite this document
Summary
The paper "From the Golden Age to Cyberpunk" discusses that technology has vastly improved the life of the average human being in the west. Human beings need to learn how to use technology without falling into the traps of needing it so much that we cannot even do simple sums without it…
Download full paperFile format: .doc, available for editing
HIDE THIS PAPERGRAB THE BEST PAPER96.2% of users find it useful 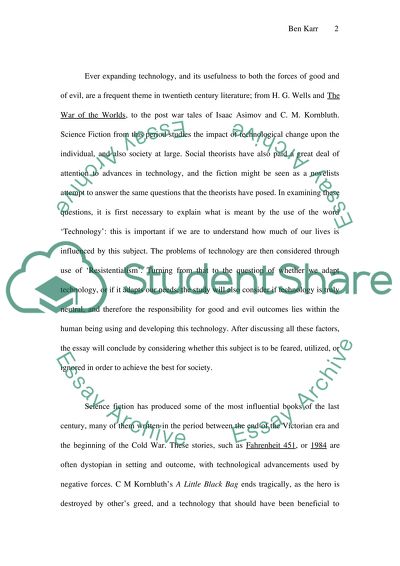 Extract of sample "From the Golden Age to Cyberpunk"

Download file to see previous pages The problems of technology are then considered through the use of 'Resistentialism'. Turning from that to the question of whether we adopt technology, or if it adapts our needs, the study will also consider if the technology is truly neutral, and therefore the responsibility for good and evil outcomes lies within the human being using and developing this technology. After discussing all these factors, the essay will conclude by considering whether this subject is to be feared, utilized, or ignored in order to achieve the best for society.
Science fiction has produced some of the most influential books of the last century, many of them written in the period between the end of the Victorian era and the beginning of the Cold War. These stories, such as Fahrenheit 451, or 1984 are often dystopian in setting and outcome, with technological advancements used by negative forces. C M Kornbluth's A Little Black Bag ends tragically, as the hero is destroyed by other's greed, and a technology that should have been beneficial to society at large is eliminated. In those stories, human evil is responsible for manipulating the essentially neutral technology (In Kornbluth's tale, it is used for good by the doctor who redeems himself, and it is his assistant's inability to see any use for the technology except as a money-spinner which causes the tragedy [Kornbluth A Little Black Bag]). However, overuse of technology also increases in human ignorance. Asimov's The Feeling of Power depicts a future where people cannot do mathematics any more due to their reliance upon technology; even the most basic thought processes are troublesome to people dependant upon computers and machines. Later fictions, such as the Cyberpunk movement, have been more ambivalent about technology:
Neuromancer depicts a future in which technology gets more and
More amazing, without having any effect on the world's
Problems. (Jones, 92)
Certainly, Neuromancer is not a utopian version of the future, but in the novel, society cannot function without technology, whether it is the official social structures, such as businesses or those in the underworld and black markets. This may be a reflection of the current state of western society, where we cannot imagine a future in which technology does not play a major part.
Any discussion of the role of technology in society must consider what exactly is meant by the term 'technology'. Usually, when this word is used, in phrases such as 'IT' (information technology) ...Download file to see next pagesRead More
Share:
Tags
Cite this document
(Anything Goes is a bad policy technology and Society Literature review, n.d.)
Anything Goes is a bad policy technology and Society Literature review. https://studentshare.org/technology/1503723-anything-goes-is-a-bad-policy-technology-and-society
(Anything Goes Is a Bad Policy Technology and Society Literature Review)
Anything Goes Is a Bad Policy Technology and Society Literature Review. https://studentshare.org/technology/1503723-anything-goes-is-a-bad-policy-technology-and-society.
“Anything Goes Is a Bad Policy Technology and Society Literature Review”. https://studentshare.org/technology/1503723-anything-goes-is-a-bad-policy-technology-and-society.
Comments (0)
Click to create a comment or rate a document

CHECK THESE SAMPLES OF From the Golden Age to Cyberpunk

Technology is Bad for Us

Technology is Bad for Us

Anything goes, as long it meets all the requirements

9 Pages(2250 words)Case Study
sponsored ads
Save Your Time for More Important Things
Let us write or edit the literature review on your topic "From the Golden Age to Cyberpunk" with a personal 20% discount.
GRAB THE BEST PAPER

Let us find you another Literature review on topic From the Golden Age to Cyberpunk for FREE!