Comments (0)
Add to wishlistDelete from wishlist
Cite this document
Summary
There is no general theory of cognitive development. But one of the most historically influential theories was developed by Jean Piaget,a Swiss psychologist.The theory concerns the emergence and acquisition of schemata in "developmental stages",times when children are acquiring new ways of mentally representing information…
Download full paperFile format: .doc, available for editing
HIDE THIS PAPERGRAB THE BEST PAPER96.3% of users find it useful 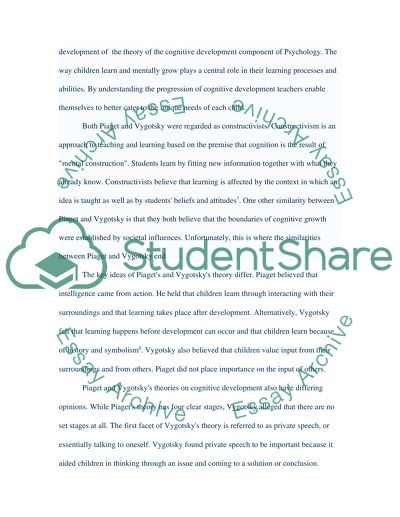 Download file to see previous pages There is no general theory of cognitive development. But one of the most historically influential theories was developed by Jean Piaget, a Swiss psychologist (1896-1980). The theory concerns the emergence and acquisition of schemata—schemes of how one perceives the world—in "developmental stages", times when children are acquiring new ways of mentally representing information. The theory is considered "constructivist". Unlike nativist theories (which describe cognitive development as the unfolding of innate knowledge and abilities) or empiricist theories (which describe cognitive development as the gradual acquisition of knowledge through experience), it asserts that we construct our cognitive abilities through self-motivated action in the world. Infants are born with a set of congenital reflexes, according to Piaget, in addition to a drive to explore their world. Their initial schemes are formed through differentiation of the congenital reflexes The sensorimotor stage is the first of the four stages. 1. Sensorimotor stage – from birth to age two years (children experience the world through movement and sene and learn object permanence)2. Pre operational Stage – from age two to seven (acquisition of motor skills)3. Concrete Operational Stage – from ages seven to eleven (children begin to tink logically about concrete events)4. Formal Operational Stage – after age eleven ( development of abstract reasoning)Cognitive development is defined as development of the ability to think and reason
reason6. Jean Piaget and Lev Semionovich Vygotsky were both pioneers in the
development of the theory of the cognitive development component of Psychology. The
way children learn and mentally grow plays a central role in their learning processes and
abilities. By understanding the progression of cognitive development teachers enable
themselves to better cater to the unique needs of each child.
Both Piaget and Vygotsky were regarded as constructivists. Constructivism is an
approach to teaching and learning based on the premise that cognition is the result of
"mental construction". Students learn by fitting new information together with what they
already know. Constructivists believe that learning is affected by the context in which an
idea is taught as well as by students' beliefs and attitudes7. One other similarity between
Piaget and Vygotsky is that they both believe that the boundaries of cognitive growth
were established by societal influences. Unfortunately, this is where the similarities
between Piaget and Vygotsky end.
The key ideas of Piaget's and Vygotsky's theory differ. Piaget believed that

intelligence came from action. He held that children learn through interacting with their

surroundings and that learning takes place after development. Alternatively, Vygotsky

of history and symbolism8. Vygotsky also believed that children value input from their

surroundings and from others. Piaget did not place importance on the input of others.

Piaget and Vygotsky's theories on cognitive development also have differing

opinions. While Piaget's theory has four clear stages, Vygotsky alleged that there are no

set stages at all. The first facet of Vygotsky's theory is referred to as private speech, or

essentially talking to oneself. Vygotsky found private speech to be important because it

aided children in thinking through an issue and coming to a solution or conclusion.

Private speech eventually is internalized, but it never completely goes away.

CHECK THESE SAMPLES OF Human development

... impact are insufficient due to the conflict between temporal and spatial scales. The change in land use due to rapid urbanization and widespread intensification of agriculture has had an adverse impact on the bio-diversity in the grasslands. The shrinking of the grasslands due to major growth and development and thereby expansion has placed increasing pressure on wild species and the regular flora and fauna in the area. Another problem of human activity facing grasslands is the rapidly increasing human population and migration due to employment opportunities which is taking place both locally and globally which has raised the extinction rates still further. Moreover encroachment of the grasslands due to the necessity of more housing...
7 Pages(1750 words)Term Paper

When it comes to the cognitive development of children, the name of Piaget is und...


7 Pages(1750 words)Assignment
sponsored ads
Save Your Time for More Important Things
Let us write or edit the essay on your topic "Human development" with a personal 20% discount.
GRAB THE BEST PAPER

Let us find you another Essay on topic Human development for FREE!