Comments (0)
Add to wishlistDelete from wishlist
Cite this document
Summary
From the paper "Women Rights in Muslim Society" it is clear that the prevalence of violence against women and the limitation of females’ human rights in many Muslim-dominated portions of the globe have also been noted as corresponding with political strife and warfare…
Download full paperFile format: .doc, available for editing
HIDE THIS PAPERGRAB THE BEST PAPER98.1% of users find it useful 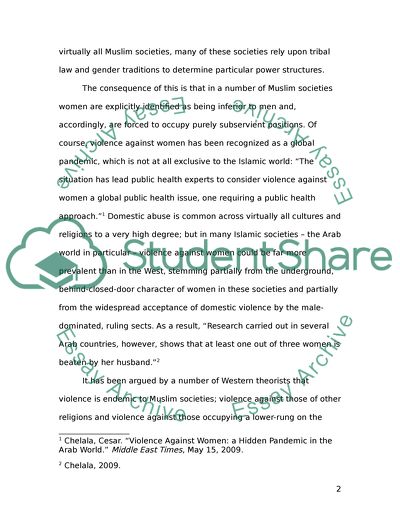 Download file to see previous pages The requisite of belief for Muslims is a relatively simple one; if you recognize that the ancient prophets had some conception of the true nature of God, then you are capable of leading a holy and virtuous path.
Faith demands adherence to the code of laws, and a recognition of the nature of mankind and his place within the world. The Qur'an makes it clear that no restrictions should be placed upon who can be saved spiritually based upon sex, culture, race, class, or the actions of others. However, these stipulations upon entry into heaven do not formally empower women in their social relationships. Although a person of any sex or ethnicity possesses the capacity to recognize Allah as the one true God and Muhammad as his prophet in virtually all Muslim societies, many of these societies rely upon tribal law and gender traditions to determine particular power structures.
The consequence of this is that in a number of Muslim societies women are explicitly identified as being inferior to men and, accordingly, are forced to occupy purely subservient positions. Of course, violence against women has been recognized as a global pandemic, which is not at all exclusive to the Islamic world: "The situation has lead public health experts to consider violence against women a global public health issue, one requiring a public health approach."1 Domestic abuse is common across virtually all cultures and religions to a very high degree; but in many Islamic societies - the Arab world in particular - violence against women could be far more prevalent than in the West, stemming partially from the underground, behind-closed-door character of women in these societies and partially from the widespread acceptance of domestic violence by the male-dominated, ruling sects. As a result, "Research carried out in several Arab countries, however, shows that at least one out of three women is beaten by her husband."2
It has been argued by a number of Western theorists that violence is endemic to Muslim societies; violence against those of other religions and violence against those occupying a lower-rung on the social ladder - women - are both justified within the overall Muslim worldview, according to these theorists. In Islam, within any given community, the rights of the underprivileged are such that they are justified in overthrowing those institutions that are deemed unjust, so long as the injustice lies clearly outside the teachings of the Qur'an. One of the difficulties with this position is that if the practices of other societies are unjust with respect to the teachings of Muhammad and Islam, then there is good reason to work to physically bring down these societies so they better adhere to the paths of virtue. So, quite often, cross-societal violence is clearly justified. But the reverse of this situation is also superficially justified; if the underprivileged of society are deemed to be behaving in an immoral manner, then violence against them is also justified. Although comprehensive studies and, therefore, accurate data is scarce, is has been often suggested that this justification for violence against women is quite prevalent in nations such as Afghanistan and Pakistan.3
Efforts to overcome these rationalizations for such violence have come largely from the West, though much of the propaganda has been aimed at appealing to the core Islamic beliefs held the populous: ...Download file to see next pagesRead More
Share:
Tags
Cite this document
(Women in Muslim Society Essay Example | Topics and Well Written Essays - 1750 words, n.d.)
Women in Muslim Society Essay Example | Topics and Well Written Essays - 1750 words. https://studentshare.org/sociology/1505336-women-in-muslim-society
(Women in Muslim Society Essay Example | Topics and Well Written Essays - 1750 Words)
Women in Muslim Society Essay Example | Topics and Well Written Essays - 1750 Words. https://studentshare.org/sociology/1505336-women-in-muslim-society.
“Women in Muslim Society Essay Example | Topics and Well Written Essays - 1750 Words”. https://studentshare.org/sociology/1505336-women-in-muslim-society.
Comments (0)
Click to create a comment or rate a document

CHECK THESE SAMPLES OF Women Rights in Muslim Society

Moral issues in society: Should Muslim women be allowed to dress according to the teachings of Islam in the workplace

10 Pages(2500 words)Case Study
sponsored ads
Save Your Time for More Important Things
Let us write or edit the essay on your topic "Women Rights in Muslim Society" with a personal 20% discount.
GRAB THE BEST PAPER

Let us find you another Essay on topic Women Rights in Muslim Society for FREE!