Comments (0)
Add to wishlistDelete from wishlist
Cite this document
Summary
The definition and perception of gender varies along different cultures and backgrounds.Substantial studies and research has been conducted and implemented concerning the girl child, but little progress has been made so far about the boy child. The consequences of this are…
Download full paperFile format: .doc, available for editing
HIDE THIS PAPERGRAB THE BEST PAPER95.9% of users find it useful 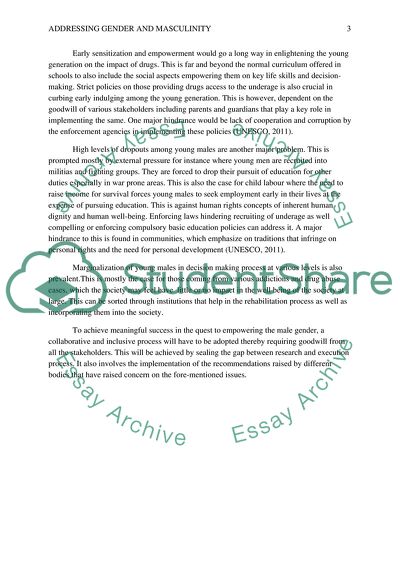 Human Rights Issue: Addressing Gender and Masculinity Addressing Gender and Masculinity The definition and perception of gender varies along different cultures and backgrounds.Substantial studies and research has been conducted and implemented concerning the girl child, but little progress has been made so far about the boy child. The consequences of this are evident from the various facets of the society. This ranges from the high numbers of convictions and imprisonments of young men, high number cases of drug and substance abuse, domestic violence, and abuse among minors. In addition, there is a high number of school drop outs, lack of proper education to empower young males in various social aspects of life, and marginalization of the young population in decision making process in the society.
There are various key concepts and theories that form the foundation of human rights, which are all implicated in this issue. This includes theories of human rights based on dignity, wellbeing, or development. They are motivated by the desire to protect and cultivate some quality in life that is filled with dignity, wellbeing, or continuing development. The theory of subsistence is motivated by the desire to preserve life itself (Heard, 1997)
There are a high number of young males ending up in prisons out of convictions of violence related cases. Consequently, this translates to a high number of those coming out of the prison systems after serving their jail terms. The concept of human dignity in human rights as suggested by Heard (1997) is paramount. One of the aspects of inherent human dignity is that all human being are equal. However, this is a challenge for the high number of those returning to the society having served part or even most of their lifetime in prison. This is because most of them find themselves alienated and shunned by the rest of the society and find it hard to be integrated back in the society.
The fact that most inmates find themselves spending most of their time in the jail also means that they may not have the necessary skills to cater for their well-being because when they come back into the society, they face a great challenge to have normal life. This contrasts the concept of the need for subsistence that bases human rights on the need for existence. The way forward to solving this problem is by creating programs that empower inmates for the life after serving their terms behind bars. Mentorship is also vital to ensure the smooth transition between the two stages and to integrate them to normal life with their families and the society.
The high number of drug and substance abuse among the young males is at alarming levels. The impact of the same is not immediate to any society but it is eventually felt in various institutions in the society breaking down such as the family unit. This also translates to limitation in achieving maximum potential as well as ripple effect of domestic violence. This contrasts the concept/theory of inherent human dignity as well as the concept of human well being and full development as advocated by Heard (1997)
Early sensitization and empowerment would go a long way in enlightening the young generation on the impact of drugs. This is far and beyond the normal curriculum offered in schools to also include the social aspects empowering them on key life skills and decision-making. Strict policies on those providing drugs access to the underage is also crucial in curbing early indulging among the young generation. This is however, dependent on the goodwill of various stakeholders including parents and guardians that play a key role in implementing the same. One major hindrance would be lack of cooperation and corruption by the enforcement agencies in implementing these policies (UNESCO, 2011).
High levels of dropouts among young males are another major problem. This is prompted mostly by external pressure for instance where young men are recruited into militias and fighting groups. They are forced to drop their pursuit of education for other duties especially in war prone areas. This is also the case for child labour where the need to raise income for survival forces young males to seek employment early in their lives at the expense of pursuing education. This is against human rights concepts of inherent human dignity and human well-being. Enforcing laws hindering recruiting of underage as well compelling or enforcing compulsory basic education policies can address it. A major hindrance to this is found in communities, which emphasize on traditions that infringe on personal rights and the need for personal development (UNESCO, 2011).
Marginalization of young males in decision making process at various levels is also prevalent.This is mostly the case for those coming from various addictions and drug abuse cases, which the society may feel have little or no impact in the well being of the society at large. This can be sorted through institutions that help in the rehabilitation process as well as incorporating them into the society.
To achieve meaningful success in the quest to empowering the male gender, a collaborative and inclusive process will have to be adopted thereby requiring goodwill from all the stakeholders. This will be achieved by sealing the gap between research and execution process. It also involves the implementation of the recommendations raised by different bodies that have raised concern on the fore-mentioned issues.
References
Heard, A (1997). Human Rights: Chimeras in Sheep’s clothing. Retrieved from http://www.sfu.ca/~aheard/intro.html
UNESCO (2011). Hrea.org. Contemporary Issues in Human Rights Education. Retrieved from http://unesdoc.unesco.org/images/0021/002108/210895E.pdf Read More
Share:
Tags
Cite this document
(“Human Rights Essay Example | Topics and Well Written Essays - 500 words - 1”, n.d.)
Human Rights Essay Example | Topics and Well Written Essays - 500 words - 1. Retrieved from https://studentshare.org/social-science/1661371-human-rights

Impact of Censorship and the Internet

...of the attacks (Syria chemical attack, 2013). Samples obtained from the attacked areas by the Organization for the Prohibition of the Chemical Weapons, confirm the presence of sarin, a nerve agent, found in a majority of rockets used in the attacks. These findings are consistent with the organophosphate intoxication found in the blood and urine samples of those who survived the attacks. Reports from the Human Rights Watch have found no evidence for the use of huge quantities of chemicals and possession of rockets by the opposition forces (Syria chemical attack, 2013). However, despite several concrete reports on the role of Syrian government in the attacks, the regimen has denied any role in the attacks...
2 Pages(500 words)Research Paper
sponsored ads
Save Your Time for More Important Things
Let us write or edit the essay on your topic "Human Rights" with a personal 20% discount.
GRAB THE BEST PAPER

Let us find you another Essay on topic Human Rights for FREE!