Comments (0)
Add to wishlistDelete from wishlist
Cite this document
Summary
The paper "Texas Judiciary Assignment" describes Bradley Smith and Del Lago partners. Mr. Smith had been invited to a party at the bar and sustained injuries after an altercation ensued at the bar. The plaintiff argued that the bar breached its duty to care under the premise-liability claim…
Download full paperFile format: .doc, available for editing
HIDE THIS PAPERGRAB THE BEST PAPER94.7% of users find it useful 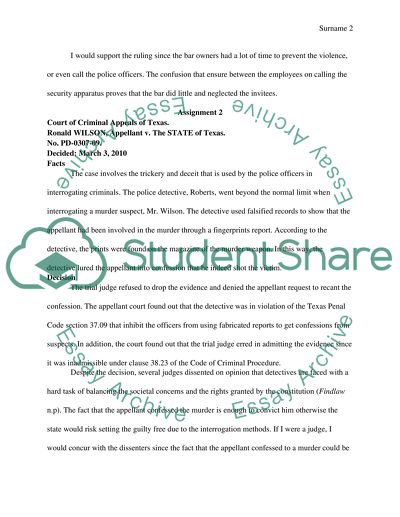 ﻿Texas Judiciary Assignment Facts The case involves an individual, Bradley Smith, and Del Lago partners. The plaintiff suffered injuries as a resultof the fight that broke out at a bar owned by the defendant. The plaintiff argues that the defendant did nothing to ensure his safety at the bar since he was not the party to the fight that broke at the bar. Mr. Smith had been invited to a party at the bar and sustained injuries after an altercation ensued at the bar. In his argument, the plaintiff argued that the bar breached its duty to care under the premise-liability claim. He argued that the bar could have done more to ensure that the persons not involved in the fight were not injured.
Decision
Smith won the case on a 6-3 decision. The jury argued that the bar had ample time to prevent the altercation since they had experience on the behavior of intoxicated persons. As the witnesses posed, the confrontation lasted for more than 90 minutes. The bar did little to enhance security during this time. The duty to care for the invited guests lay in the hands of the bar management. The fact that the threat was foreseeable was enough to prompt an action from the bar management (Cruise n.p).
The dissenting opinions utilized various reasonable premises to deny the arguments of Smith. Justice Johnson argued that the situation at the bar was an obvious danger and that Smith could have left long before the altercation. In this regard, Smith chose to remain at the bar through the crisis that the bar owners should not be held responsible. The opinion was supported by the Justice Hecht who accused Smith of negligence.
I would support the ruling since the bar owners had a lot of time to prevent the violence, or even call the police officers. The confusion that ensures between the employees on calling the security apparatus proves that the bar did little and neglected the invitees.
Assignment 2
Court of Criminal Appeals of Texas.
Ronald WILSON, Appellant v. The STATE of Texas.
No. PD-0307-09.
Decided: March 3, 2010
Facts
The case involves the trickery and deceit that is used by the police officers in interrogating criminals. The police detective, Roberts, went beyond the normal limit when interrogating a murder suspect, Mr. Wilson. The detective used falsified records to show that the appellant had been involved in the murder through a fingerprints report. According to the detective, the prints were found on the magazine of the murder weapon. In this way, the detective lured the appellant into the confession that he indeed shot the victim.
Decision
The trial judge refused to drop the evidence and denied the appellant request to recant the confession. The appellant court found out that the detective was in violation of the Texas Penal Code section 37.09 that inhibit the officers from using fabricated reports to get confessions from suspects. In addition, the court found out that the trial judge erred in admitting the evidence since it was inadmissible under clause 38.23 of the Code of Criminal Procedure.
Despite the decision, several judges dissented on the opinion that detectives are faced with a hard task of balancing the societal concerns and the rights granted by the Constitution (Findlaw n.p). The fact that the appellant confessed the murder is enough to convict him otherwise the state would risk setting the guilty free due to the interrogation methods. If I were a judge, I would concur with the dissenters since the fact that the appellant confessed to a murder could be a starting point to get the reliability of the evidence. Fingerprints are unique and thus the appellant could not have confessed if he was pretty sure that he had not used the murder weapon. In this regard, I would deny the motion to suppress.
Works cited
"WILSON v. STATE - FindLaw." Findlaw. N.p., n.d. Web. 5 July 2014.
Cruse D. "Texas Supreme Court upholds liability against a bar that did not stop a brewing fight [orders of Apr. 2, 2010]." Supreme Court of Texas Blog. N.p., 2 Apr. 2010. Web. 5 July 2014.
Supreme Court of the State of Texas. "Opinions of the Supreme Court of Texas. The fiscal year 2010 (September 1, 2009–August31, 2010)." (2010): 109-175. Web. 5 July 2014. Read More
Share:
Tags
Cite this document
(“Texas Judiciary Assignment Example | Topics and Well Written Essays - 500 words”, n.d.)
Texas Judiciary Assignment Example | Topics and Well Written Essays - 500 words. Retrieved from https://studentshare.org/social-science/1651757-texas-judiciary-assignment

...Running Head: Introduction to Business Law Introduction to Business Law Goes Here al Affiliation Goes Here This research paper will theorize on the Texas Homestead exemption clause which has had considerable attention paid to it for many years. To some it is honest protection in times of financial strain. To others it's just a legal excuse that some hide in behind instead of standing up and trying to make a change in their life and admit their financial blunders. This paper will investigate both legal venues and allow the reader to interpret their own opinion through he compiled research. INTRODUCTION TO BUSINESS LAW To begin this research correctly, a proper definition of a "homestead exemption" law or clause...
2 Pages(500 words)Assignment

...1. What was the most interesting aspect of Amerindian culture in Texas I think the most interesting aspect of Amerindian culture in Texas is the Mashramani. It is said to be Texas' "national occasion observed in celebration of the country's Republican achievement." The word mashramani is said to be "derived from the Arawak dialect which means cooperation after hard work." It has been recorded that even up to the present time, some communities of Amerindians of Arawakan ancestry still engage in cooperative community work. Then they culminate their cooperative work by the use of their local traditional drinks to celebrate their achievement. Moreover, the local term the Amerindians call their cooperative efforts is "cayape." http...
8 Pages(2000 words)Assignment

...﻿Texas State Governance Questions: 1. What are the names of the people who represent you in the Texas House and Texas Senate? The Texas Senate is represented by Senator Rodney Ellis while the Texas House is represented by Representative Alma A. Allen. 2. (a) Select a bill to research that was authored by either your Texas state senator or your Texas state representative in the last legislative session. (b) What is the number of the bill? Who is its author? Texas House Representative Alma Allen together with Nash, Torres, Shelton, Patrick and Diane co-authored the House Bill 359 in the previous legislative sessions. 3. Click on the bill number and you will be taken to a page that includes links to detailed information about...
1 Pages(250 words)Assignment

...6 Rabobank Nederland Evaluate Roger Barr’s performance as it related to the North Texas Cotton Cooperative. It is found that the North Texas Cotton Cooperative (NTCC) was highly leveraged and was not performing well for the past years, but Roger Barr was only relying on his personal opinion in granting the loan request of the former. One major consideration therefore in this case is the capacity of the former to pay for its corresponding debt to be made with Rabobank. Unfortunately, Barr did not place substantial significance on this situation, but rather was justifying how NTCC could repay its future debts based on information way beyond empirical evidences. It is therefore clear at this point that Barr substantially lacked the real...
3 Pages(750 words)Assignment

...Texas: History of Sugar Land Sugar Land, Texas, is situated within Fort Bend County and Houston metropolitan area (Slotboom 15). The area has a richcultural, political and economic history that spans several decades. Ever since its incorporation, the city has witnessed massive growth with the prospects of future growth looking good especially considering its rich natural resources, attractions, and conducive business environment. The history of Sugar Land can be traced back to 1828 when Stephen F. Austin granted the land to his secretary, Samuel M. Williams, for his exemplary service (Bettye par. 1). In 1838, Samuel sold his treasure to his brother Nathaniel F. Williams. Nathaniel and another of his brother started growing sugarcane...
1 Pages(250 words)Assignment

Women on the Texas Frontier

... Women on the Texas Frontier The of the “woman’s sphere” and “domesti have made been s of discussion since the nineteenth century. These issues have also been subjected to scholarly evaluation as well as analyses in various parts of the world. According to Jacqueline Reiner, prescriptive dimensions of literature that were published in the early and late nineteenth centuries described the woman’s sphere as a superior moral influence that could restrain negative behaviors of man while molding behavioral traits of future generation, which are her children. Jacqueline Reiner points out various barriers that hindered Southern Women from moving out of the woman’s sphere; creating a scenario where only a few were able to move out of the woman’s...
1 Pages(250 words)Assignment

...﻿Texas Government Question A. (2) Texas has a stretched and cantankerous rapport with the federal government over decades. When Texas joined the Union in 1845, Texans condemned Washington’s letdown to safeguard the border with Mexico. They further condemned the federal government’s role in fighting against Indians on the borderline. Then, in 1930s when vast offshore oil reserves were discovered, the state fought the national government to retain control of its reserves (Lauderdale, 127). These wounds are still fresh in Texas and have propelled some of the Texans such as Ricky Perry and Abbott to take to a legal battle. Despite the above differences, federal government has a mandate to ensure homogeneity of policies and programs across...
1 Pages(250 words)Assignment

Securing the Border in Texas

... Securing the Border in Texas While Spain’s cities of Melilla and Ceuta in Africa are struggling with the increasing illegal immigrants from North African states, the state of Texas also has its share of unwanted illegal immigrants. It is dealing with an immigration crisis that hurts Texas families in all ways unimaginable. The increasing and free flow of drugs, trafficked people and weapons are all as a result of a porous border. It is the inadequate security that has resulted to this problem, which will then have an effect on the economic development, trade and education. This means that the people who will suffer the most are Texas families, from loss of jobs, high insecurity because of drug cartels and street gangs among other problems...
5 Pages(1250 words)Assignment

... Texas Government Question Texas should abolish the partisan elections of the judges, and adopt a system in which the governor appoints the judges with the subsequent approval of the Texas Senate. Newell, Prindle, and Riddlesperger contend that many of the judges do not have any opposition during the election, and substantial campaign contribution seeks to earn them a position on the bench (52). The partisan selection process can affect the delivery of the justice because interest groups, law firms, and citizens can attempt to choose the judges who will benefit them most. Similarly, the partisan election can result in the selection of the judges with limited knowledge of the judicial and legal matters. Likewise, the partisan elections...
2 Pages(500 words)Essay
sponsored ads
Save Your Time for More Important Things
Let us write or edit the assignment on your topic "Texas Judiciary Assignment" with a personal 20% discount.
GRAB THE BEST PAPER

Let us find you another Assignment on topic Texas Judiciary Assignment for FREE!