Comments (0)
Add to wishlist Delete from wishlist
Cite this document
Summary
After having enough to eat, drink and sleep man looked around in the surroundings. Since that time man has been working to up-grade himself. Societies then started to follow a code conduct which…
Download full paper File format: .doc, available for editing
HIDE THIS PAPERGRAB THE BEST PAPER95.6% of users find it useful 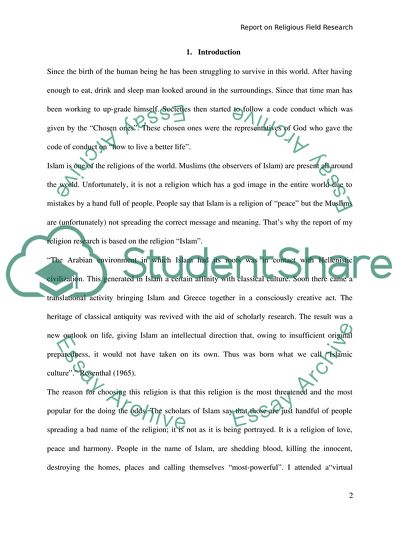 Download file to see previous pages People say that Islam is a religion of “peace” but the Muslims are (unfortunately) not spreading the correct message and meaning. That’s why the report of my religion research is based on the religion “Islam”.
“The Arabian environment in which Islam had its roots was in contact with Hellenistic civilization. This generated in Islam a certain affinity with classical culture. Soon there came a translational activity bringing Islam and Greece together in a consciously creative act. The heritage of classical antiquity was revived with the aid of scholarly research. The result was a new outlook on life, giving Islam an intellectual direction that, owing to insufficient original preparedness, it would not have taken on its own. Thus was born what we call “Islamic culture”.” Rosenthal (1965).
The reason for choosing this religion is that this religion is the most threatened and the most popular for the doing the odds. The scholars of Islam say that those are just handful of people spreading a bad name of the religion; it is not as it is being portrayed. It is a religion of love, peace and harmony. People in the name of Islam, are shedding blood, killing the innocent, destroying the homes, places and calling themselves “most-powerful”. I attended a“virtual religious service”. Let us review and figure out the misconceptions and the problems and what this religion actually is.
2.1 Terrorist Activities or Jihad: The most important aspect why this religion has a “negative impact” over other religions is the terrorist activities by individuals all around the world. The people who conduct such activities call themselves “Muslims” who are killing and shedding blood of others in the name of Islam (Jihad) but for the world it’s “Terrorism”. The most important part is “Can Terrorism be compared to Jihad (The Holy War)?”
Why does a ...Download file to see next pages Read More
Share:
Tags
Cite this document
(“: Report on Religious Field Research Assignment - 1”, n.d.)
: Report on Religious Field Research Assignment - 1. Retrieved from https://studentshare.org/religion-and-theology/1608291-report-on-religious-field-research

CHECK THESE SAMPLES OF : Report on Religious Field Research

Nursing Leading Change in Practice and Alterations in Child Health

Tesco Plc in a Social Perspective

... entirely different threats when he took over the helm from Reginald H. Jones in 1981. Back then, the main concerns were foreign competition and a bloated workforce which he had religiously trimmed down. The environment today is vastly different with globalization trends all over. The strategy at G.E. can be summed up in two words: technology and innovation. It is the two words that result in technical leadership which provides those high margins in the past and even today in some of the growth areas it had identified such as health care and renewable energy. G.E. had long left industries where there was price pressure and margins got thinner. By using technical leadership in industries it had chosen, it is possible to produce high-margin...
12 Pages (3000 words) Report
sponsored ads
Save Your Time for More Important Things
Let us write or edit the assignment on your topic ": Report on Religious Field Research" with a personal 20% discount.
GRAB THE BEST PAPER

Let us find you another Assignment on topic : Report on Religious Field Research for FREE!