Comments (0)
Add to wishlist Delete from wishlist
Cite this document
Summary
“Then the word of the Lord came to me, saying “Son of man, how is the wood of the vine better than any other wood , the vine branch which is among the trees of the forest? Is wood taken from it to make any object? Or can men make a peg from it to hang any vessel on? Instead,…
Download full paper File format: .doc, available for editing
HIDE THIS PAPERGRAB THE BEST PAPER94.6% of users find it useful 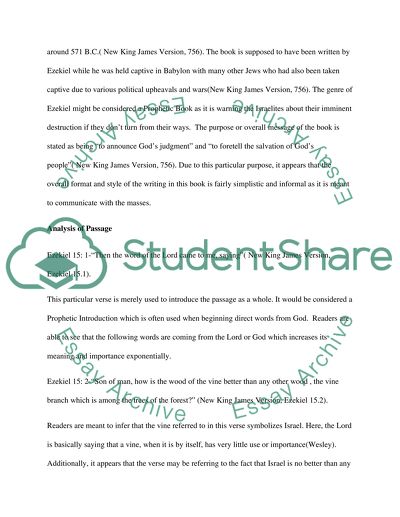 The focus of this exposition is the book of Isaiah chapter 61: 1-11.  The King James Version of the Bible is used as well as the Judaica Press Complete Tanach Yeshayahu Chapter 61.  The Jewish Publication Society Tanach (1917) is also used.  Lastly, Rashi’s commentary is referred to as well.  It is worthy of mention that both the Jewish and Christian perspectives are explored here and that, in the true essence of research, one is not favored over the other.  Isaiah Ben Amoz was considered a prophet in his time. He was known to predict the deliverance of Jerusalem from the Assyrians. Jerusalem was freed from the control of the Assyrians in 701 B.C. which added to his credibility as a prophet. The whol...
13 Pages (3250 words) Research Proposal

7 Pages (1750 words) Assignment
sponsored ads
Save Your Time for More Important Things
Let us write or edit the research paper on your topic "EXEGESIS PROJECT ( EZEKIEL 15:1-8 )" with a personal 20% discount.
GRAB THE BEST PAPER

Let us find you another Research Paper on topic EXEGESIS PROJECT ( EZEKIEL 15:1-8 ) for FREE!