Comments (0)
Add to wishlist Delete from wishlist
Cite this document
Summary
It relay wonderful memories that can be told and retold over ones lifetime. Furthermore, museums provide valuable information to anyone who visits them as well as learning…
Download full paper File format: .doc, available for editing
HIDE THIS PAPERGRAB THE BEST PAPER91.8% of users find it useful 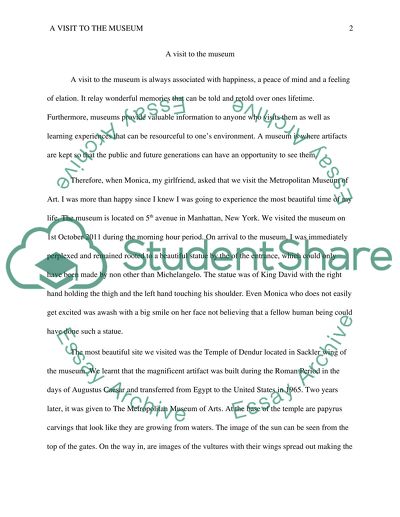 A visit to the museum A visit to the museum A visit to the museum is always associated with happiness, a peace of mind and a feeling of elation. It relay wonderful memories that can be told and retold over ones lifetime. Furthermore, museums provide valuable information to anyone who visits them as well as learning experiences that can be resourceful to one’s environment. A museum is where artifacts are kept so that the public and future generations can have an opportunity to see them.
Therefore, when Monica, my girlfriend, asked that we visit the Metropolitan Museum of Art. I was more than happy since I knew I was going to experience the most beautiful time of my life. The museum is located on 5th avenue in Manhattan, New York. We visited the museum on 1st October 2011 during the morning hour period. On arrival to the museum, I was immediately perplexed and remained rooted to a beautiful statue by the of the entrance, which could only have been made by non other than Michelangelo. The statue was of King David with the right hand holding the thigh and the left hand touching his shoulder. Even Monica who does not easily get excited was awash with a big smile on her face not believing that a fellow human being could have done such a statue.
The most beautiful site we visited was the Temple of Dendur located in Sackler wing of the museum. We learnt that the magnificent artifact was built during the Roman Period in the days of Augustus Caesar and transferred from Egypt to the United States in 1965. Two years later, it was given to The Metropolitan Museum of Arts. At the base of the temple are papyrus carvings that look like they are growing from waters. The image of the sun can be seen from the top of the gates. On the way in, are images of the vultures with their wings spread out making the scene totally scintillating that left us simply amazed. The image of the king offering sacrifices and holding scepters is seen between the walls that separate the sky from the earth. The gods Isis and Osiris are crowned and with some writings by their figures. The believe within the temple of Dendur is that if a couple make love there, they will never part ways until death. This was good news for Monica and I since we have marriage plans in the future but that was saved for another visit.
We also visited the section where American art collections are stored. The most exciting scene was that of George Washington and his soldiers crossing the Delaware. Being a passionate lover of Africa, we could not leave the museum without visiting the African Art site, and I must say, we were not disappointed. The carved poles from New Guinea and the items from Benin sparkled my moment there. On the Asian art site, I couldn’t help but let tears flow down my cheeks when I watched The Great Wave off Kanagawa and felt that it was about to fall on me.
With the vastness of the museum and given the limited time we had, we could only manage to maneuver around the other sides of the museum and return home. From now on, whenever I have time I will always visit the museum and particularly The Temple of Dendur. If by fate, I hear The Metropolitan Museum caught fire, I would pray so hard that the Temple of Dendur does not catch fire. This is one piece of art that I feel I am personally attached to it after the visit and besides I have not yet taken there my fiancée for blessings so that we stay together forever after marriage. I would also want to save the statue of King David due to my love for the king himself and the way he believed in himself by fighting and killing Goliath.
The visit to the metropolitan museum was one of the happiest experiences of my life and I swore to always visit the museum at least twice a year. Monica was ecstatic about it and wondered why we had never thought of it before. I also realized that museums are indeed the pillar of our nations pride and heritage that act as a bridge between the past and future generations.
Reference
Peck, A. (1996). Period rooms in the metropolitan museum of art. New York: Metropolitan Museum of Art. Read More
Share:
Tags
Cite this document
(“Cultural Event Report Essay Example | Topics and Well Written Essays - 500 words”, n.d.)
Cultural Event Report Essay Example | Topics and Well Written Essays - 500 words. Retrieved from https://studentshare.org/religion-and-theology/1582896-cultural-event-report

Equality, diversity and rights at workplace in Westminster City Council

How drugs are affecting our lives

... lingers after he had left. Jack Welch is vehemently against breaking up GE and wants its present structure as a conglomerate (Schwartz, NYT, p. 3) which he had termed as virtual surrender of the very values he held dear throughout his stint at G.E. if the company is broken up. During his time with G.E., it had as many as 17 different divisions which got cut down to only six today. But this masks the several hundred businesses under this neat categories, actually a mishmash of different product lines and services. The culture at G.E. today is vastly different than the one under Jack Welch. It could be described as kindler and gentler under Mr. Immelt with his leadership style as more subtle if compared to Jack Welchs often abrasive style...
12 Pages (3000 words) Report
sponsored ads
Save Your Time for More Important Things
Let us write or edit the essay on your topic "Cultural Event Report" with a personal 20% discount.
GRAB THE BEST PAPER