Comments (0)
Add to wishlistDelete from wishlist
Cite this document
Summary
Millions of children across the world believe in Santa Claus, just as millions of adults across the world believe in God. For these children, Santa is real, he exists. Is God then, the Santa Claus for grown-ups Voltaire states, "If God didn't exist it would be necessary to invent Him"…
Download full paperFile format: .doc, available for editing
HIDE THIS PAPERGRAB THE BEST PAPER98% of users find it useful 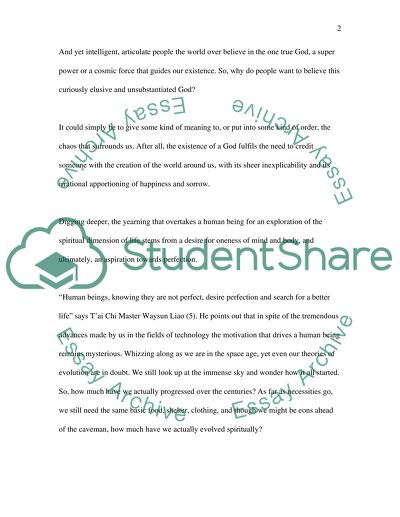 Download file to see previous pages What is the origin of life and mankind Not only are a lot of these questions being answered by scientists, but even miracles and other such occurrences attributed to divine intervention are being explained away by physics. "From its origin with Galileo, Copernicus and Newton, through Darwin and Einstein, to the age of computers and high-technology, modern science has cast a cold and somewhat threatening light on many deep-rooted religious beliefs. () scientists have demolished a lot of cherished religious beliefs and have come to be regarded by many as faith-wreckers." (Davies, 5).
And yet intelligent, articulate people the world over believe in the one true God, a super power or a cosmic force that guides our existence. So, why do people want to believe this curiously elusive and unsubstantiated God
It could simply be to give some kind of meaning to, or put into some kind of order, the chaos that surrounds us. After all, the existence of a God fulfils the need to credit someone with the creation of the world around us, with its sheer inexplicability and its irrational apportioning of happiness and sorrow.
Digging deeper, the yearning that overtakes a human being for an exploration of the spiritual dimension of life stems from a desire for oneness of mind and body, and ultimately, an aspiration towards perfection.
"Human beings, knowing they are not perfect, desire perfection and search for a better life" says T'ai Chi Master Waysun Liao (5). He points out that in spite of the tremendous advances made by us in the fields of technology the motivation that drives a human being remains mysterious. Whizzing along as we are in the space age, yet even our theories of evolution are in doubt. We still look up at the immense sky and wonder how it all started. So, how much have we actually progressed over the centuries As far as necessities go, we still need the same basic food, shelter, clothing, and though we might be eons ahead of the caveman, how much have we actually evolved spiritually
It is in pursuance of this desire to evolve spiritually that God has been invented (or perhaps, He exists!). Artistic and creative people, those who march to a different beat from the rest of us, instinctively pursue this 'ultimate' through their work, the nature of their work being such that needs no rationalization to anyone other than themselves.
In the work of these outstanding painters and poets, musicians and mystics intellect takes the back seat. In their art one sees their real experiences distilled, and more, one catches a glimpse of something indefinable. Whether it is the element of wonder in Alice Walker's The Color Purple when she exclaims that it is God who is trying to please us, not us who are expected to live up to His rules, or the naked truth in Borges Afterglow, or even the fatalistic note in Yeats' poetry.
Because, in spite of advances made in science and technology, we still gaze up at the Milky Way, and wonder at its magnitude and glory. We still respond to the beauty of a piece of music or a painting without rationalizing it. We even watch the flight of a jet, fascinated, forgetting that the aerodynamic principles underlying the technology are as old as the birds.
Poets like Yeats, Octavio Paz, Luis Borges and Rilke move us because they bring us closer to the eternal. They are more obviously attracted to the ...Download file to see next pagesRead More
Share:
Tags
Cite this document
(“Do we need to believe in a God or does God need us to exist Essay”, n.d.)
Do we need to believe in a God or does God need us to exist Essay. Retrieved from https://studentshare.org/religion-and-theology/1519672-do-we-need-to-believe-in-a-god-or-does-god-need-us-to-exist

“Do We Need to Believe in a God or Does God Need Us to Exist Essay”, n.d. https://studentshare.org/religion-and-theology/1519672-do-we-need-to-believe-in-a-god-or-does-god-need-us-to-exist.
Comments (0)
Click to create a comment or rate a document

The end of the Cold War and the events of 9/11 have provided a catalyst for unprecedented challenges to the international order and national security policy. Arguably the most important challenge has been the appropriate and most efficacious method to combat a transient and intangible enemy, which transcends borders and the conventional notion of an organized army that “yet has shown remarkable resilience against traditional military firepower”. Mahmood’s observations highlight the changin...
7 Pages(1750 words)Article

Even though there are no specific short cuts for success people seek success wherever they move about. Questions such as “what makes one successful?” and “how can one become successful in life?” have become commonplace. It is ambiguous whether it is one’s education, popularity, talent, goals, wealth or profession that makes him successful. In fact, Success does not have anything to do with one’s environment, circumstances, level of education, or even financial condition. Success is not limited to any specific fields or walks of life: one can find successful people in almost all walks of life whether it be the film industry, business field, politics or in the world of science and technology. No d...
7 Pages(1750 words)Essay
sponsored ads
Save Your Time for More Important Things
Let us write or edit the essay on your topic "Do we need to believe in a God or does God need us to exist" with a personal 20% discount.
GRAB THE BEST PAPER

Let us find you another Essay on topic Do we need to believe in a God or does God need us to exist for FREE!