The Internet from Christian and Islamic Perspectives - Research Paper Example

Comments (0)
Add to wishlist Delete from wishlist
Cite this document
Summary
The Internet from Christian and Islamic Perspectives Introduction Essentially, the Internet is a medium or a platform by which people could access all sorts of information. It is free and unrestricted, containing available data coming from all sources from anywhere around the world…
Download full paper File format: .doc, available for editing
HIDE THIS PAPERGRAB THE BEST PAPER93.7% of users find it useful 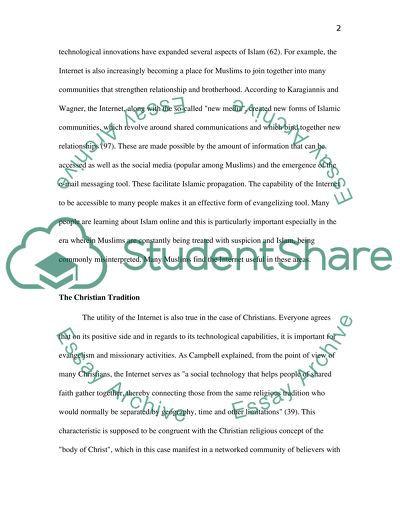 Extract of sample "The Internet from Christian and Islamic Perspectives"

Download file to see previous pages Internet in Islam The popular notion, especially in the West is that Islam may not be comfortable with the Internet. Images of censorship and restriction would probably inform this perception. But the fact is that the Internet is accessible to many Muslims across the world. There is no specific Islamic teaching that bars the use of the Internet for Muslims. As a matter of fact, many Muslims are finding the Internet a convenient and useful way to learn not just about common knowledge but also about Islam, its rituals, among other information. Today, both traditional Muslim texts and contemporary Muslim conversation have found their way to the information superhighway (Bowen and Early, 300). Abdulla also pointed out that while Islam is not dependent on the Internet and computers and would not miss it if it disappears, there is still the fact that these technological innovations have expanded several aspects of Islam (62). For example, the Internet is also increasingly becoming a place for Muslims to join together into many communities that strengthen relationship and brotherhood. According to Karagiannis and Wagner, the Internet, along with the so-called "new media", created new forms of Islamic communities, which revolve around shared communications and which bind together new relationships (97). These are made possible by the amount of information that can be accessed as well as the social media (popular among Muslims) and the emergence of the e-mail messaging tool. These facilitate Islamic propagation. The capability of the Internet to be accessible to many people makes it an effective form of evangelizing tool. Many people are learning about Islam online and this is particularly important especially in the era wherein Muslims are constantly being treated with suspicion and Islam, being commonly misinterpreted. Many Muslims find the Internet useful in these areas. The Christian Tradition The utility of the Internet is also true in the case of Christians. Everyone agrees that on its positive side and in regards to its technological capabilities, it is important for evangelism and missionary activities. As Campbell explained, from the point of view of many Christians, the Internet serves as "a social technology that helps people of shared faith gather together, thereby connecting those from the same religious tradition who would normally be separated by geography, time and other limitations" (39). This characteristic is supposed to be congruent with the Christian religious concept of the "body of Christ", which in this case manifest in a networked community of believers with the Internet as a medium. The Internet also serve as a resource and communication tool for Christians across the globe in their religious activities, information campaigns, among other evangelical works. It allows the Christian churches to reach out to its flock and facilitates in giving charity, missionary work, among others. Comparison It is important to underscore that the positive perspectives on the Internet as demonstrated in the previous sections are both true in the cases of Christianity and Islam. And this is also shown in terms of the negative attitude or perspective towards the Internet is not exclusive to any religion. There are Christian and Islamic values that can be both threatened by the Internet. For example, Christians criticize the uncensored content in the Internet that are made available to ...Download file to see next pages Read More
Share:
Tags
Cite this document
(“The Internet from Christian and Islamic Perspectives Research Paper”, n.d.)
Retrieved from https://studentshare.org/religion-and-theology/1450086-the-internet-in-islamic-point-of-view-and-the

(The Internet from Christian and Islamic Perspectives Research Paper)
https://studentshare.org/religion-and-theology/1450086-the-internet-in-islamic-point-of-view-and-the.

“The Internet from Christian and Islamic Perspectives Research Paper”, n.d. https://studentshare.org/religion-and-theology/1450086-the-internet-in-islamic-point-of-view-and-the.
Comments (0)
Click to create a comment or rate a document

CHECK THESE SAMPLES OF The Internet from Christian and Islamic Perspectives

It was used to producing a generation of colonialists’ tutored primarily to take over the lands that they were being taught about. The purpose of their academics was to make them familiar with the land and the people, and in turn, bring about their conquest.

Second, Edward Said discusses how by defining ‘Orientalism’ the Western scholars were actually defining themselves. By constantly pointing out the differences between the ‘East’ and the ‘West’, Orientalists themselves produced a divide. The West being liberated, open, and innovative; while the East is portrayed as backward, confined, and superstitious. This continuous brainwashing gave the future ‘liberators’ of...
8 Pages (2000 words) Book Report/Review

How Secure Is the Internet When It Comes to Personal Data

Millions of computer users worldwide every year lose invaluable data and information at the hands of stolen means employed by anyone sitting on workstation thousands of miles away from the host node. Computer privacy is one such aspect on which the researchers in the same field are working their best. Certain ways are being devised all around the globe to ascertain the manner in which computer data can be kept secret from the people who are not authorized to seek it. Internet privacy of late has become a serious issue that should be tackled with immediate effect. There are many issues at stake with respect to computer privacy such as the authority to create standards regarding the usage of personal data on one’s machine as w...
6 Pages (1500 words) Term Paper

The Christian Foundations of a Secular Nation

America is a nation that was founded by Christians even though the present shape is secular. However, a study of the history of the forming of the constitution suggests that the founding fathers wanted to have a Christian nation. Yet at the same time, I do not think that they would be disappointed by the shape of the nation as it stands. On the other hand, they might be disappointed by how the presidency has become little more than a punch line for late-night shows.

From a cursory look at the constitution, a person may be tempted to say that it is entirely secular and makes clear divisions between church and state and has no mention of Christianity or religion whatsoever. However, a deeper analysis of the question shows...
7 Pages (1750 words) Term Paper

A history of anti-Semitism and it is a prevalent belief in Christendom that the Jews, as the murderers of Christ, deserve all possible sufferings is the reason that Hitler's massacre of the Jews was met with silent acceptance from the vast majority of his subjects. The continued anti-Semitic feelings of the Church stem from Christian teachings based on interpretations of the New Testament that have also contributed to the Holocaust and the persecution of Jews in Europe over the centuries.
In 1814, Jews in the Papal States were locked into cramped ghettos at night, were forbidden to practice law or medicine, to hold public office or to hire Christian servants. Meanwhile, elsewhere in Europe, Jews were increasingly free to live...
11 Pages (2750 words) Assignment

Heresy was the term used to characterize those groups of religious sects that challenged in some way or another, the ideology that came to be accepted at orthodox Christianity. While many of the heretic groups differed in their beliefs and norms they were united by a common notion that the Church did not represent their particular values and beliefs. They were predisposed to reject and isolate themselves from the Church and its one-dimensional views of Christianity. The Church, in turn, viewed these detractors as heretics and rejected them, isolating them and persecuting them for th...
11 Pages (2750 words) Report

verted to this religion believe that finally they have found their true identity by discovering that they are the descendants of the tribes of “white” Israel that were lost (Quarles 2004, p.7).
When any group of people say that they are superior to others on the basis of the race they belong to and also inculcate the belief that they are the only chosen people of God and not the people from other ethnic background, then one can very well say that that group or the organization is practicing racial beliefs. People who follow the Christian Identity believe that the people from Caucasian ethnic background are true Israelites and hence they are the only people from the God’s family (Quarles 2004, p.9). The teach...
6 Pages (1500 words) Coursework

It is quite common in society to find a child abusive family, sibling abuse, dating abuse, parent abuse and even spouse abuse. Therefore, the question about violent behavior in the family can be difficult to answer. First, it would be quite important to identify what constitutes family violence. In as much as the definitional consensus might be achieved, the fact remains that acts of family violence mostly happen behind closed doors which means that the activities remain hidden sometimes, ignored or hidden. Violent behaviors among most families will mean poor upbringing of its members and in this case, the children in the family. The family remains an important source for the growth of the children in society therefore; whatever h...
7 Pages (1750 words) Assignment
sponsored ads
Save Your Time for More Important Things
Let us write or edit the research paper on your topic "The Internet from Christian and Islamic Perspectives" with a personal 20% discount.
GRAB THE BEST PAPER

Let us find you another Research Paper on topic The Internet from Christian and Islamic Perspectives for FREE!