Christianity: A Huge Factor in the Story of Western Progress The Victory of Reason vs. The Closing on the West - Research Paper Example 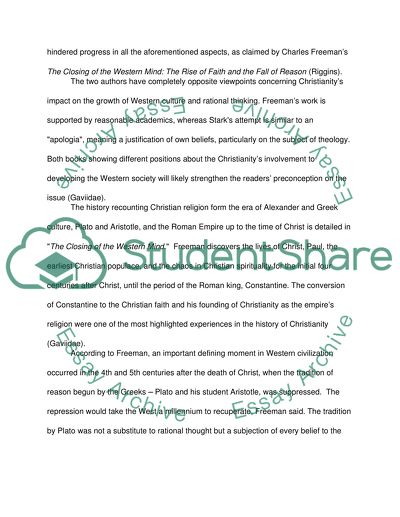 Extract of sample "Christianity: A Huge Factor in the Story of Western Progress The Victory of Reason vs. The Closing on the West"

Download file to see previous pages However, the more recognizable material theory is that Christianity hindered progress in all the aforementioned aspects, as claimed by Charles Freeman’s The Closing of the Western Mind: The Rise of Faith and the Fall of Reason (Riggins). The two authors have completely opposite viewpoints concerning Christianity’s impact on the growth of Western culture and rational thinking. Freeman’s work is supported by reasonable academics, whereas Stark's attempt is similar to an "apologia", meaning a justification of own beliefs, particularly on the subject of theology. Both books showing different positions about the Christianity’s involvement to developing the Western society will likely strengthen the readers’ preconception on the issue (Gaviidae). ...
According to Freeman, an important defining moment in Western civilization occurred in the 4th and 5th centuries after the death of Christ, when the tradition of reason begun by the Greeks - Plato and his student Aristotle, was suppressed. The repression would take the West a millennium to recuperate, Freeman said. The tradition by Plato was not a substitute to rational thought but a subjection of every belief to the examination of reasonable argument. The Greek rational tradition was intentionally stifled by the Roman Church during the time of Constantine (Riggins). The reason behind the stifling was tinged with political interests. Emperor Constantine believed that by institutionalizing the state behind Christianity, he could turn it into a tool of mass annihilation and would eventually be a unifying strength against the empire during the time it was under threat from raiding assailants, and be a powerful arm of social control. Freeman concluded that the liberated belief and rational thought were defeated since the bishops acquired political supremacy (Gottlieb). The vulnerable religious and philosophical rationale of the Roman Empire ended in the 4th century when the Emperor Constantine made Christianity the executive religion of the empire. Freeman stated, this “orthodox” thought started the suppression of even the slightest form of free reason (Riggins).  Stark’s book contradicted Freeman’s. Stark’s stance was firm when he wrote that it was indeed Christianity that encouraged a cultural loyalty to reason that facilitated the rise of the West. The Medieval Christianity was primarily and possibly solely accountable for the big leap shaped by Western Civilization in the fields of philosophy, the arts, science, technology, and autonomy (Wolfe). ...Download file to see next pages Read More
Share:
Tags
Cite this document
(“Christianity: A Huge Factor in the Story of Western Progress The Research Paper”, n.d.)
Christianity: A Huge Factor in the Story of Western Progress The Research Paper. Retrieved from https://studentshare.org/religion-and-theology/1442103-starkyies-the-victory-of-reason-with-freemanyies

“Christianity: A Huge Factor in the Story of Western Progress The Research Paper”, n.d. https://studentshare.org/religion-and-theology/1442103-starkyies-the-victory-of-reason-with-freemanyies.
Comments (0)
Click to create a comment or rate a document

CHECK THESE SAMPLES OF Christianity: A Huge Factor in the Story of Western Progress The Victory of Reason vs. The Closing on the West

Hedge Funds are usually designed as partnerships with the general partner typically being the hedge fund’s manager. (Hedco.net, 2006) The general partner usually invests a large part of his wealth and money into the hedge funds. Hedge funds are different from mutual funds with respect to the type of investors and also with regards to the regulations generally imposed on them. The objective of this dissertation is to analyze...
57 Pages (14250 words) Term Paper

The economy of the West grew because of many factors. Sugar, slave trade, and silver played an important role in economic development as we...
7 Pages (1750 words) Essay

The statistics also indicate that the total number of deaths was 12,941 with the white population encompassing 11,595 and the black 1 162. These statistics show that the rate of birth is higher than the rate of deaths i.e. 10.4% to 9.7%.
The county government enhances the health of the residents, including the youth through collaborating with the health care providers and other organizations involved in catering for the welfare of the community. According to CityData.com (2012), some of the health care services provided by hospitals to the county residents include Acute Care, Proprietary, emergency service, and veterans administration. The social welfare is enhanced by non-governmental organizations, especially those involved...
6 Pages (1500 words) Coursework

Many channels mean many programs and talk shows; this leads to an infinite number of programs one can see in his life. These programs on air a tremendous knowledge as well as a series of propaganda and rumors against some specific community, society, country or culture. In fact, today’s generation blindly believes and is completely driven by the fact given by the television.
No invention of science is all good or all bad, but the use totally depends on the user. Some watch TV as a source of their everyday knowledge while others watch for the sake of entertainment. Both uses hold a significant position in one’s life.
Scientists and specialists can definitely argue over the positive and negative influences of T...
7 Pages (1750 words) Case Study
sponsored ads
Save Your Time for More Important Things
Let us write or edit the research paper on your topic "Christianity: A Huge Factor in the Story of Western Progress The Victory of Reason vs. The Closing on the West" with a personal 20% discount.
GRAB THE BEST PAPER

Let us find you another Research Paper on topic Christianity: A Huge Factor in the Story of Western Progress The Victory of Reason vs. The Closing on the West for FREE!