A in Support of the Progressive Creationism Theory - Research Paper Example

Comments (0)
Add to wishlist Delete from wishlist
Cite this document
Summary
Name of of professor Name of subject Date submitted A paper in support of the Progressive creationism theory. Through out time, man as searched of his own origin, and often made theories and rationalizations regarding how we got here. Some of these arguments were far-fetched, while others had solid points with matching evidences and literature to support them…
Download full paper File format: .doc, available for editing
HIDE THIS PAPERGRAB THE BEST PAPER98.9% of users find it useful 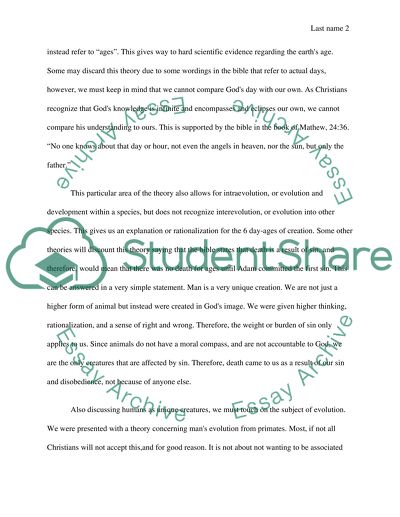 Extract of sample "A in Support of the Progressive Creationism Theory"

Download file to see previous pages This particular theory is neither purely scientific or atheistic such as the atheistic evolution theory, nor purely biblical like the theistic evolution or 24-hour day theory. It aims to mediate these two frames of thought by explaining creation in a way that addresses the concerns of both though patterns. According to Dale Tooley in his paper, “Progressive Creation: An Overview”, the progressive creationism theory is increasingly becoming accepted as a viable and arguable theory for the creation and origin of the world. In contrast to young earth creation theories, it maintains that the 6 days of creation written in the bible do not necessarily refer to 24-hour days, but instead refer to “ages”. This gives way to hard scientific evidence regarding the earth's age. Some may discard this theory due to some wordings in the bible that refer to actual days, however, we must keep in mind that we cannot compare God's day with our own. As Christians recognize that God's knowledge is infinite and encompasses and eclipses our own, we cannot compare his understanding to ours. This is supported by the bible in the book of Mathew, 24:36. “No one knows about that day or hour, not even the angels in heaven, nor the sun, but only the father.” This particular area of the theory also allows for intraevolution, or evolution and development within a species, but does not recognize interevolution, or evolution into other species. This gives us an explanation or rationalization for the 6 day-ages of creation. Some other theories will discount this theory saying that the bible states that death is a result of sin, and therefore, would mean that there was no death for ages until Adam committed the first sin. This can be answered in a very simple statement. Man is a very unique creation. We are not just a higher form of animal but instead were created in God's image. We were given higher thinking, rationalization, and a sense of right and wrong. Therefore, the weight or burden of sin only applies to us. Since animals do not have a moral compass, and are not accountable to God, we are the only creatures that are affected by sin. Therefore, death came to us as a result of our sin and disobedience, not because of anyone else. Also discussing humans as unique creatures, we must touch on the subject of evolution. We were presented with a theory concerning man's evolution from primates. Most, if not all Christians will not accept this,and for good reason. It is not about not wanting to be associated with monkeys, nor about denial of evolution, but about how the creation of man was described in the bible. If we look at it, creation of other creatures was described rather normally. There were not a lot of details that were given regarding how other creatures were created, but this is not the case with man. The bible gave details on how man was made. This indicates that our creation is unique, purposeful and special. The bible also describes that we were made in God's image and that life was breathed into us by God himself. This highlights just how special we are. The theory does recognize that within ages, animals can evolve and adapt, with the guidance of God. A good example of this is the abundance of different kinds of birds. Some swim, others walk, others fly. But never the less, all of them are still birds. This is not the same as the evolution of man from primates. We are not ...Download file to see next pages Read More
Share:
Tags
Cite this document
(“A Paper in Support of the Progressive Creationism Theory Research”, n.d.)
Retrieved from https://studentshare.org/religion-and-theology/1431691-choose-a-religious-postition

(A Paper in Support of the Progressive Creationism Theory Research)
https://studentshare.org/religion-and-theology/1431691-choose-a-religious-postition.

“A Paper in Support of the Progressive Creationism Theory Research”, n.d. https://studentshare.org/religion-and-theology/1431691-choose-a-religious-postition.
Comments (0)
Click to create a comment or rate a document

...Management Theory and Practice in the early childhood education industry This Report applies management theory into practice in the early childhood industry, especially in the context of women leaders. Management issues play a significant role in the academic sector, because early childhood professionals need higher levels of motivation in order to avoid burnout . As pointed out in a study by Osgood and Halsall (2007) where they carried out research to examine the position of women in leadership or management positions, a “glass ceiling” exists for women in the academic setting, which could significantly impair motivation. Since many of the individuals employed in the early education sector are women, addressing this issue is even more...
6 Pages (1500 words) Coursework
sponsored ads
Save Your Time for More Important Things
Let us write or edit the research paper on your topic "A Paper in Support of the Progressive Creationism Theory" with a personal 20% discount.
GRAB THE BEST PAPER

Let us find you another Research Paper on topic A Paper in Support of the Progressive Creationism Theory for FREE!