Comments (0)
Add to wishlist Delete from wishlist
Cite this document
Summary
Insert Name Insert Grade Course Insert Submission Date Paul of Tarsus Life, Career, Writings, and Teaching Introduction Paul was an apostle to Jesus as is revealed by numerous epistles written by him in the New Testament. He was named Saul until his conversion from when his name changed into Paul…
Download full paper File format: .doc, available for editing
HIDE THIS PAPERGRAB THE BEST PAPER94.7% of users find it useful 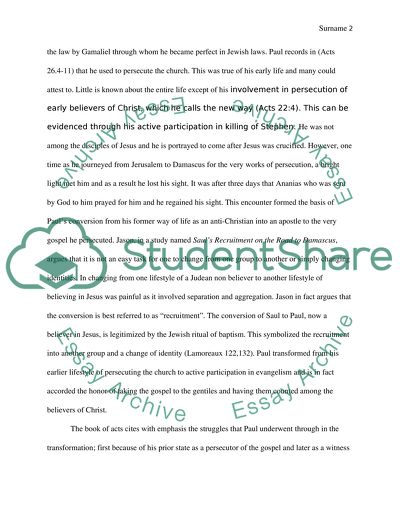 Download file to see previous pages This work will also touch on the methodology of preaching the gospel and how he was able to get followers and his ways of establishing churches through his missionary journeys to various towns in Asia. In this analysis, I will use information contained in history about the political atmosphere and how it fostered his work. The other part of this work will be a description of his death and what the church today can learn from his life. The Bible speaks little on Paul’s family. Philippians 3.5 records him as a Hebrew from the tribe of Judah in Israel. However, in Acts 23.3, Paul implies ancestral connections to the Pharisees. His was born in Tarsus, in the province of Cilicia. Nevertheless, his upbringing is recorded to have been in Jerusalem and was trained in the law by Gamaliel through whom he became perfect in Jewish laws. Paul records in (Acts 26.4-11) that he used to persecute the church. This was true of his early life and many could attest to. Little is known about the entire life except of his involvement in persecution of early believers of Christ, which he calls the new way (Acts 22:4). This can be evidenced through his active participation in killing of Stephen. He was not among the disciples of Jesus and he is portrayed to come after Jesus was crucified. However, one time as he journeyed from Jerusalem to Damascus for the very works of persecution, a bright light met him and as a result he lost his sight. It was after three days that Ananias who was sent by God to him prayed for him and he regained his sight. This encounter formed the basis of Paul’s conversion from his former way of life as an anti-Christian into an apostle to the very gospel he persecuted. Jason, in a study named Saul’s Recruitment on the Road to Damascus, argues that it is not an easy task for one to change from one group to another or simply changing identities. In changing from one lifestyle of a Judean non believer to another lifestyle of believing in Jesus was painful as it involved separation and aggregation. Jason in fact argues that the conversion is best referred to as “recruitment”. The conversion of Saul to Paul, now a believer in Jesus, is legitimized by the Jewish ritual of baptism. This symbolized the recruitment into another group and a change of identity (Lamoreaux 122,132). Paul transformed from his earlier lifestyle of persecuting the church to active participation in evangelism and is in fact accorded the honor of taking the gospel to the gentiles and having them counted among the believers of Christ. The book of acts cites with emphasis the struggles that Paul underwent through in the transformation; first because of his prior state as a persecutor of the gospel and later as a witness to the same gospel and more so because of his struggles for acceptance in the society. Earlier on, Paul had a legacy of terrorizing and killing the Christian Jews who argued that Jesus was the savior and the king of the Jews. Among the many issues that supported his persecution was that the Jews saw Christ’s death as a curse and not an honor. He therefore used the synagogue punishment system to inflict sufferings to all those who were followers of Christ. This was the main reason why Saul, now Paul, experienced a lot of resistance while he came back in support of the same faith he was persecuting. He suffers a lot in the Mediterranean ...Download file to see next pages Read More
Share:
Tags
Cite this document
(“Paul of tarsus life, career, writings, and teaching Term Paper”, n.d.)
Retrieved from https://studentshare.org/religion-and-theology/1402435-paul-of-tarsus-life-career-writings-and-teaching

CHECK THESE SAMPLES OF Paul of tarsus life, career, writings, and teaching

Some students are hands-on learners. For them, three-dimensional (3D) anatomical models are effective. “Exploratory tools enable users to investigate structures in ways not possible in the real world” (Implementing, para. 3). These 3D models can represent just about any part of the human body. Models are available of small structures, like the head, or of the entire human skeleton. Models of the entire human body can also be purchased. Some of them even have removable parts so...
6 Pages (1500 words) Report

The practical implications are for more progressive career learning, in conditions that enable the due process to establish viable bases for both choice and change of mind. This thinking more sharply differentiates career education from guidance, setting out a strong rationale for the former. It does not replace DOTS but extends it into a new-DOTS re-conceptualization termed career-learning space. The effectiveness of career learning is determined by its transferable outcomes. New-DOTS thinking resonates with the conditions for transferable learning. There are possibilities here for building a strong consensus between practice, theory, and policy.
It helps us in exploring our strengths and can identify the areas we really wan...
9 Pages (2250 words) Assignment

To evaluate this course it is a good idea to start from the beginning and look at the objectives. As I was looking for references in this process, I found a website that had tips for designing instruction that I felt would offer me a structure to work within. According to "Instructional Design," the instruct...
7 Pages (1750 words) Term Paper

Community life has its advantages but also has its limitations to the members and the outsiders.
“The good things we secure for ourselves are uncertain and precious until it is secured for everyone and incorporated into our common life.”-Jane Addams. With society moving faster and more detached to technology, busy schedules, and job changes, it becomes harder and harder to feel a sense of community. This can result in a life of solitude and a lose a sense of belonging. Community life helps extract people out of this solitude life and introduce better, challenging and fun tasks such as participation in acts of kindness. It also provides room for volunteering, meeting neighbors, discussing important issues with othe...
7 Pages (1750 words) Case Study
sponsored ads
Save Your Time for More Important Things
Let us write or edit the term paper on your topic "Paul of tarsus life, career, writings, and teaching" with a personal 20% discount.
GRAB THE BEST PAPER

Let us find you another Term Paper on topic Paul of tarsus life, career, writings, and teaching for FREE!