Comments (0)
Add to wishlistDelete from wishlist
Cite this document
Summary
This paper looks at the voice of a mother and feminist subjectivity from a psychoanalytic perspective. Basing on the story A Pair of Tickets by Amy Chan, through psychoanalytic criticism, this paper explores the techniques that the author uses to expose the experiences of Joy luck mothers in China…
Download full paperFile format: .doc, available for editing
HIDE THIS PAPERGRAB THE BEST PAPER95.7% of users find it useful 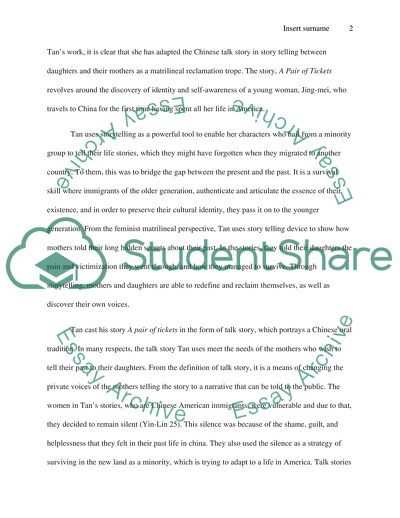 Download file to see previous pages The voice of a mother and daughter is one of the subjects that feminist scholars have critically looked at. Scholars have captured the issue of western feminists with the literature of matrilineage. Amy Tan in her scholarly works has written stories on Chinese Ladies who went through great suffering in their past life, and this has really affected their present life. Hence, this article will look at the voice of a mother and feminist subjectivity from a psychoanalytic perspective.

Amy Tan is a prolific and acclaimed writer, for the past decade, she has specialized in mother-daughter relationships. He has explored his creativity in storytelling, which can be traced from her book The Joy Luck Club where she explores mother-daughter voices persuasively and consistently. A Pair of Tickets, a short story in the Joy Luck Club is expressed with creativity and femininity. In addition, it is written with an approach of maternal subjectivity. In examining Tan’s work, it is clear that she has adapted the Chinese talk story in storytelling between daughters and their mothers as a matrilineal reclamation trope. The story, A Pair of Tickets revolves around the discovery of identity and self-awareness of a young woman, Jing-mei, who travels to China for the first time having spent all her life in America.

... 7 July Analysis of Two Kinds by Amy Tan Brief Summary The story of Two Kinds is part of the Joy Luck Club stories written by Amy Tan that speaks of the difficult and sometimes convoluted relationships between the Chinese mothers in the story, who lived through the early years of Republican era China, and their daughters who were born in the in the environment of the United States. In the story of Two Kinds, the focus is on the narrator and main character, Jing-mei, as she is being pushed by her mother to become a musical prodigy. The motivation behind the prodding of Jing-mei’s mother is to compete with bragging rights to their family friend, Lindo Jong, whose daughter Waverly is a publicized young chess champion. While Jing-mei...
3 Pages(750 words)Essay

... Linda Ruth Williams declares that though most critics try to provide a ‘psychoanalytic or socially informed’ analysis of the femme fatale, what happens more often than not is succumbing to the impulse to ‘taxonomise’ them (2005, p. 98). This exercise in description often gives way to narrow, watertight categories that are unable to fit the wide spectrum of femmes fatales that one gets to see in art. But despite this inherent danger in the act of attempting to define femme fatale, there has been a sustained effort to at least try and record the various antecedents to and associations of the term. In their book The Femme Fatale: Images, Histories, Contexts, Helen Hanson and Catherine O’Rawe attempt to do this by collating different essays...
40 Pages(10000 words)Dissertation

... College: Scar by Amy Tan Amy Tan, in her story d “Scar”, talks about a young girl d An-mei. The describesAn-mei as a little Chinese girl that has never had the opportunity to know her mother and identify with her at a personal level. Tan’s narrative is set in China during the early part of the nineteenth century. It becomes apparent that the Chinese had a very high value for honor during this era and if anyone dishonored their family, they were deemed to be ghosts. The author emphasizes this when she states “In those days a ghost was anything we were forbidden to talk about” (Tan 291).This is clearly illustrated in the case of An-mei’s mother, who is disowned by her family for running off to be a concubine and refusing dowry from An-mei’s...
3 Pages(750 words)Essay

..."The Hills Like White Elephants" by Ernest Hemingway is a short story published in 1927 in a collection called Men Without Women. The story takes place at a train station in Ebro, with an American man and a girl waiting to head to Madrid. As they await the train, they order drinks and engage in conversation. The conversation is somewhat vague and elusive. They discuss the topic without saying the topic: abortion. Both characters have different views on this matter, which is evident from their body language and from the dialogue. This paper will analyze the body language and dialogue from a psychological point of view, using Freudian concepts. After ordering beer for both of them, the girl is standing and looking... Hills Like White ...
2 Pages(500 words)Essay

Typically, a tragic hero, according to the Aristotelian definition, must be of noble birth and nobler intent, flawed only by the hubris that carries him to his doom. The tragic hero must carry within himself all virtues but one which is enough to invoke a feeling of either pity or disgust towards the end. Moreover, the fall/death of the tragic hero is also punctuated by self-realisation and awareness of the flaw, which may or may not be followed by remorse; the presence or absence of which, incurs in the reader/audience, a corresponding sense of pity or disgust.
If one were to consider this generic definition of the tragic hero, Beatrice Joanna fails the eligibility criteria by a total miss. Yes, indeed, she is born of noble...
9 Pages(2250 words)Book Report/Review

Category one and two combine when considering that the "universal characteristics of language may be so because they are aspects that make it more easily acquirable."2
The evolutionary nature of language is a new category of investigation that attempts to determine what occurred in our ancestral lineage that gave rise to a form of communication that is distinct from other species. This category involves genetics, paleontology, and archaeology.
However, whereas these studies benefit from a rich fossil record, evolutionary linguistics suffers from a lack of evidence. To overcome these shortcomings, linguists often make use of studies in the four categories already discussed.
However, Kinsella's research is unique in th...
34 Pages(8500 words)Essay

... literature that undoubtedly served as the age of cultural and literary transition, where general public and ordinary people were the subject-matter of discussion and the central theme in the eyes of the writers, novelists and poets of Victorian Age. Almost all the writers of that period showed in their creativity a keen awareness of their social environment, and many of them come forward as social critics. (Singh 1997) Alfred Tennyson is regarded as the best representative of Victorian Age. Being a careful student of science and philosophy, he was deeply impressed by the new discoveries and speculations which were undermining the orthodox religion and giving rise to all sorts of doubts and difficulties. (Mullik 1997) Tennyson’s poetic...
14 Pages(3500 words)Essay

... of heuristic availability are just. Individuals are merely given a chance to either be deceived or not. The daily routine or experiences should not be the reason they judge future events hence the need to rely on facts. Psychoanalytic Study The psychoanalytic method draws the basis on the unconscious and the irrational part of the human being. There is a raging conflict in any human mind. One part respecting the social organisation of the society, the constraints involved. The fight is between the conscious and unconscious part of the brain. Andy is overly critical of other. The sense of inferiority is overwhelming hence the need to demotivate others. These support a sense of superiority among his peers. These are defensive mechanisms...
4 Pages(1000 words)Essay

How does Tan draw the reader into her story right from the beginning? Tan talks about how she fell in love with a blondehaired American boy and how she prayed to have a slim American nose. She immediately let the reader know she is of Chinese descent living in America due to her description. The description immediately draws the reader to be interested in reading the narrative.
How Does Tan use TRANSITIONS both to drive and to clarify her narratives?
Tan talks about how she was praying for the blonde haired boy and a slim new American nose. This made the reader understand the different cultures written about in the narrative. She talks about the Chinese food being a strange menu, but then her mother advises her otherwise.

2 Pages(500 words)Assignment
sponsored ads
Save Your Time for More Important Things
Let us write or edit the term paper on your topic "Psychoanalytic Criticism in A Pair of Tickets by Amy Tan" with a personal 20% discount.
GRAB THE BEST PAPER

Let us find you another Term Paper on topic Psychoanalytic Criticism in A Pair of Tickets by Amy Tan for FREE!